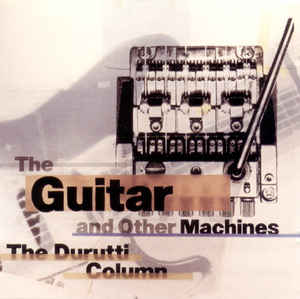 The Durutti Column – The Guitar And Other Machines Deluxe

New reissue of the sixth Durutti Column studio album, originally released on Factory in 1987. This deluxe edition includes separate discs featuring the original album, a round up of associated studio recordings and a live show from the famous Bottom Line club in New York (along with two tracks taped at WOMAD 1988). LTW’s Ian Canty explores the work of the Vini Reilly’s electronically enhanced Column…..

If The Guitar And Other Machines came to represent a change of tack for Durutti Column, it was neither planned or at the expense of Vini Reilly’s original vision. Perhaps that’s why it worked so well. Tony Wilson, who had been the band’s leading advocate and fan since day one, supplied Vini with some electronic instruments as a Christmas present. He also applied a fatherly boot to his rear, as he thought it was high time DC became a little more successful, seeing as New Order had invaded the national and dance charts regularly with their sequencer and synth-enhanced efforts. So good but not entirely altruistic intentions were at play. Reilly worked tirelessly one night to master these strange items and by the morning had found a way to encompass the new sounds into something that was at the same time both fresh sounding, but still in the Durutti style.

Thus inspired, he and his long time cohorts drummer/percussionist Bruce Mitchell and viola player John Metcalfe set to work on a new album. Stephen Street, fresh from his lauded work with the Smiths, was brought in to man the boards (around this time Reilly provided guitar on Morrissey’s debut album Viva Hate, also produced by Street). The result was to be the first LP ever commercially released on the ill-fated Digital Audio Tape format. At the time though, these innovations allied to the change to a more “modern” electronic sound through the use of Wilson’s Xmas gifts, seemed to show Durutti at the cutting edge again and thus gave them a second wind.

Although a whole new vista of sound opened up on this record, there is no doubt that Durutti Column still remained true to Reilly’s original vision. Soft, gentle, dreamy and spacey, but warm and very occasionally spiky where you wouldn’t expect it too. Another slight amendment that changed things a little was the use of female vocals (Miranda Stanton of Factory label-mates Thick Pigeon contributing these along with Vini’s partner of the time Pol) on some of the more song-based material, which helped to turn a few of the tracks into diverting, dream-Pop beauties.

But the key to this album (and indeed a fair amount of the Durutti Column canon) is that it works more as a whole than as individual tracks. Reilly employs the instruments and sounds available and melds them to his own particular ends (with of course much help from his fellow musicians), in the same way that a painter uses different colours/shades. There is a very visual element to them and images are easily conjured by this listener’s mind for one. Of course this time round he had a wider array of instruments and equipment so hence Durutti touches on different areas than before, but the overall effect given is still restful, serene and evocative in the way much of their records had been up to this point in time.

The portents of the new are detectable straight away, on opening track Arpeggiator, which begins with a electro drum rumble. This percussion settles down and then is joined by a typical Vini Reilly delicately picked guitar line which slowly gets a little more intense. The overall effect is as fresh as sunny winter morning. Red Shoes has the merest element of Funk and is the first “song” on the album – Vini’s very lyrical guitar often takes the place of vocals, but not here. When In The World even has some quite “Rock” guitar flourishes and this forms a bewitching combination with the horns and electro beats present.

English Landscape Tradition carries the 80s most heavily with almost Hip Hop electro handclaps, but is allied to some nice strings. The next track, the edgier Miss Haymes, is a contrast, but it’s a gentle shift of gears as always. I really like hearing Vini Reilly sing, even though he would probably himself downplay his vocalising it always feels real, uncertain, but charmingly so. The best example on The Guitar…is Don’t Think You’re Funny, a great confessional/put down. In the final analysis The Guitar And Other Machines really works because it builds on Durutti Column’s past glories in a way that is not obtrusive or gimmicky – it feels natural and logical- that eternal guitar still taking you to unexpected places, whatever the setting.

Three pieces that featured on the original Factory issue of The Guitar….are restored to the edition presented here. For these tracks DC were aided and abetted by ACR’s Jez Kerr and Simon Topping – LFO Mod is probably the pick of these three offerings, an intricate, gorgeous electronic dream, but 28 Oldham Street has a Kraftwerk synth dance feel and is pretty good too.

Disc two here presents us with a nice rummage through the Durutti back pages of the time. Most unexpected of all is the cover of Jefferson Airplane’s hippy classic White Rabbit, cut on the hoof in New York with Debi Diamond on lead vocals – it sticks fairly close the original but Reilly puts his stamp on there with some trademark wobbly guitar work. Elsewhere Our Lady Of The Angels has some of those great female vocals married to a lovely bit of jangle, while the “dance” mixes of When In The World are a lot of fun.

The final disc in this collection is given over to a live show from New York’s Bottom Line Club (plus two tracks tagged on from a 1988 show at WOMAD). Durutti Column concerts seemed relatively low-key and sedate affairs, more akin to a recital than a Rock & Roll “gig” (not that there is anything wrong with that). In fact opener Prayer with prominent piano and viola is much nearer Classical/Chamber Music than anything else and the audience responds throughout with polite and respectful applause. They were never going to be demonstrative and jumping around, so it feels appropriate.

However there is always a sense of purpose and they build slowly but steadily towards a climax, with old favourites like Jacqueline and The Missing Boy given excellent treatments, alongside newer efforts When In The World and Miss Haymes. Pol In B benefits greatly from Bruce Mitchell’s marvellous percussive touches and there’s a definite magic here, it may be (mostly) quiet and gentle, but true magic nonetheless.

This new reissue gives a full view of the state of Durutti Column in 1987 – a time of change, but also managing to play to their strengths. Long time fans will be pleased one of their most fondly remembered LPs has been given this deluxe treatment, with the usual love, care and attention you would expect from Factory Benelux. A delightful way to start the new year.