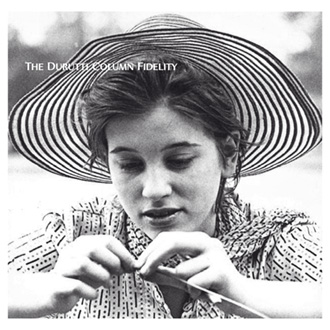 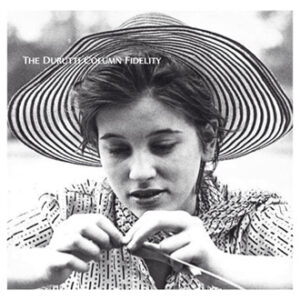 Reissue of Durutti Column’s 1996 album with two bonus tracks. This comes in the form of a double coloured vinyl album with new cover artwork plus a digital copy…….LTW’s Ian Canty catches up with the Column’s dance moves in the midst of Britpop….

By the time that Fidelity was released in 1996, Durutti Column had gone from their early, purely guitar instrumental roots to include various other sounds and influences that pushed them further into classical and dance directions. Fidelity found them mostly immersed in the latter. Vini Reilly’s guitar expertise is obviously well represented, but the vocals from Eley Rudge and the electronics firmly place the record in the chilled out dance field. I listened to this on New Year’s Day and it fitted the mood perfectly….hopeful sounding, but tinged with a little regret for something lost.

The title track sets out the stall for the rest of the LP, starting with a queasy-sounding rhythm before settling down into a neat soundscape of rickety guitar and breathy vocals with a load of echo applied to them. A gently and beguiling beauty, which is followed by the shuffle beats of the more house-toned For Suzanne, Eley’s voice soaring alongside the synth-driven beat. Future Perfect comes next and for me it is the highlight of the album – the warm rush and dance beat would have made an excellent single. Abstract Of Expression continues the upbeat dance trend and also packs in some operatic vocals among the electronica bleeps.

Coming next is the short jazz guitar reflection of G+T, this record’s only look back to the “classic” Durutti sound of 1980. With Remember Me we move to the latter half of the album proper with the only Vini vocal – I know he himself didn’t rate his singing highly, but I always find his simple, uncertain style charming. Sanko is another pacey dance number and Grace would have been another contender, if a single had been plucked from the album. It gathers momentum and the song is almost a cherry nursery rhyme, but with a slight hint of the sinister lurking mysteriously in the background.

The final two tracks from Fidelity switch position on this vinyl edition. Storm For Steve opens with scratchy noise and electronics, before mutating into a quite house/dance thing with Vini’s guitar getting a chance to shine again. The glistening guitar and brief bird song of Guitar For Mother now provide the end-piece to the album and to be honest it does make sense in this order.

Of the two bonus tracks My Only Love seems to be a partial cover of DC’s own The Rest Of My Life, here a guitar jangle in typical Vini-mode with ghostly vocals adding to the dream-like atmosphere. The final offering, The New Fidelity, comes from a rare compilation album entitled Hare, Hunter, Field originally issued in 1992. This tune features racing electronic modulation set against a trademark guitar essay – perhaps pre-empting the accompanying album and a good fit as an extra here.

This latest release in Les Disques du Crepuscule’s ongoing Durutti Column reissue programme is put together with great love and respect for the artist. Fidelity may have found Vini a fair distance away from the early days of The Return Of The Durutti Column album, but it is a satisfying, relaxing listen, one that also might get your toes tapping with the dance rhythms deployed. Perfect for these mid-winter months and with that a hint of warmth on hand that we all need during these damp, dark days. Perhaps not one for newcomers to DC, but this album has held up across the years pretty well and merits this natty first vinyl release.