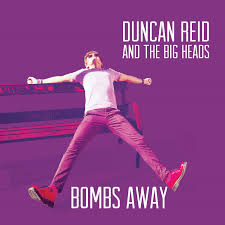 Duncan Reid and The Big Heads

as back in January, 2016 when I first reviewed Duncan Reid and The Big Heads live for Louder Than War, and its fair to say I was hugely impressed with their dynamic and melodic stage presence. Over a year on, I had the pleasure of seeing them again, in the same venue (the incredibly intimate Foremans Bar) and came away with the same uplifted feeling a few weeks ago. All the right elements just seem to fall into place perfectly for Reid and co onstage – his material translating to the sweaty tightness of the venue with impeccable charm. The banter and chemistry between him and his band (a talented bunch comprising Sophie K Powers on guitar, Karen Jones on on drums and Mario Venegas on guitar) and the connection with the audience. But something that really stood out for me above anything else was the strength of the new material, which was memorable and bold enough to stay implanted in my brain the next day. Which means all should bode very well for their third album, Bombs Away.

I’ve always been impressed with the way Reid has moved through his career; still proudly wearing his breakthrough as bass player with The Boys very much on his sleeve. But also constantly moving forward in a fresh and exciting way. The Big Heads describe themselves as heavy melody punk rock and its certainly hard for me to find a better description. The album’s opening track Can’t Stop an infectious ode to procrastination with its standout chorus and rocker-fuel guitar line. The aforementioned Sophie K Powers consistently shows herself as a real force to be reckoned with. Both sonically on record and live with her charismatic stage presence setting the scene perfectly for a collection of instant, upbeat power-pop. Unlikely themes for such cheerful melodies work surprisingly well. The title track is a glam-rock style stomp contemplating war and world leaders. While the pop simplicity of C’mon Josephine takes Reid’s brothers divorce as a starting point. Lets Skip To The Good Bit, the track which most stuck in my head after their recent live show, translates with just the same manner to record.

Whilst Reid’s youthfully bouncy voice does seem very much tailor-made for power-pop, on the reflective moments when things do slow down it takes on a new, almost intimate quality. Confetti and the closing God Save Me Now reveal a different side to The Big Heads and make for genuinely touching moments. The band, whose main priority seems to be creating the sound of having as much as fun as possible. Bombs Away, then, has enough huge melodic moments to sound like a collection of singles, but is still very much a cohesive, well-structured album which conveys all the energetic spirit of The Big Heads live shows. A triumph.