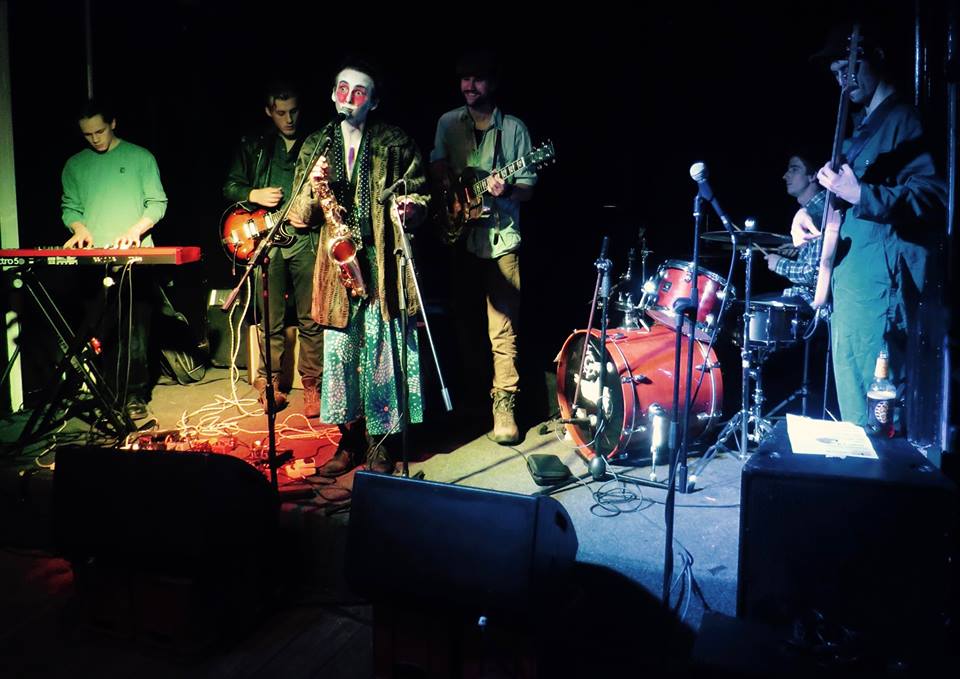 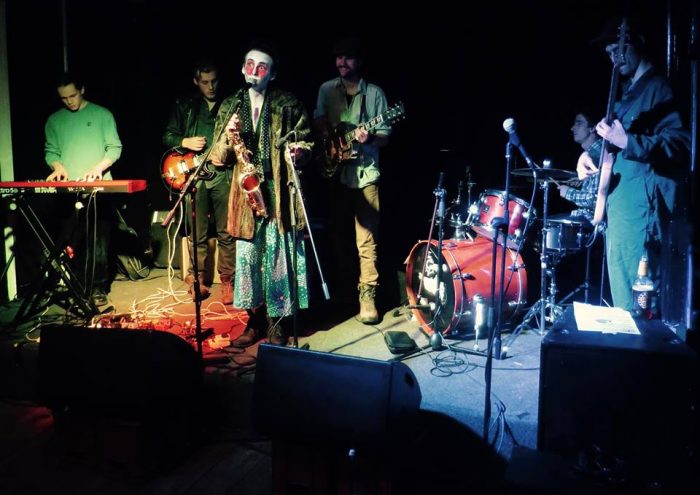 A trio of young bands reigned supreme on the Hobbit’s stage tonight, whipping up a tempest and bringing to mind a lyric from England’s loudest band that never was, about wanting to “make some eardrums bleed”.

The audience were treated to raw, madly energetic performances that had everyone frenetically whooping, moshing and freaking the night away.

First up were London (Camden) based trio DUMBJAW, who are Lenny Verralis, lead guitar, vocals and dandy dresser (channeling Ray Davies, circa 1970, in velvet jacket and large brimmed hat), Elliott on bass and Jamie Oliver on drums (also drummer with the UK Subs). They describe their sound as “GUNK” Alternative/Punk/Grunge/Rock.

Dumbjaw have nailed their genre. This was a high octane, frenetic mash of dirty, dissonant sludgy guitar, fast tempos and strong punk riffs, with a fundamentally hard rock crux, reminiscent of early ’70s Led Zep and Sabbath. There was a tangible grunge imprint to their sound – although a disparate range of influences are clearly at play here.

Dumbjaw were loud and raw, belting it out with energy, gusto and dynamic panache.  Lead singer Lenny powerfully commands the vocals with just the right measure of charismatic frontman swagger.

There was an enjoyable rally of sarky banter between the three, who were clearly enjoying themselves. When I caught up with them for a chat later on, I found them to be the most charming, down to earth, friendly blokes, with an impressive level of commitment to their work. They play a lot of gigs! If they turn up to play at a venue near you, check them out. You can hear a selection of their singles on Soundcloud. Two of my favourites, ‘Dissociative’ (Maybe Records, 2014) and “I’ll Give You Hell’ (Maybe Records, 2015) are on Youtube.

I first reviewed the extraordinary Mad King Ludwig & the Mojo Company  a little over a month ago. I happened upon them when going to see a friend play and, having missed his act entirely, stayed to catch these young minstrels on his recommendation. What followed might be termed a “We’re not in Kansas any more” moment because, in the same manner that the tornado whisked Dorothy away to Oz, Mad King Ludwig & the Mojo Company caught my musical soul and transported it off to a magical place. They literally blew me away – ruby red slippers and all.

The Mojo Co are a multi-instrumental six piece, comprising a melange of formidable talent that combine to produce something very unique. Fronted by the Mad former Bavarian Monarch on vocals and saxophone, with Sir Rumblesticks beating up a storm on drums and truly amazing guitar work by The Magyar Gypsy and Tsar Chord. Pope Jazzbo, makes his keyboard sing and, in wonderful contrast to the mesmerising writhing of their frontman, a splendidly static O Soberano de Baixo, positioned at the far edge of the stage, making his own special magic on bass. He occasionally gives a little smile and his stillness, compared with the Mad King’s theatrical prancing, puts me in mind of Sparks’ Russ and Ron Mael.

The Mad King has a voice from the Louisiana swamps, belonging to a man at least twice his age. I’ve heard a few people liken his vocal sound to Tom Waits. To my ear, his gravelly growl and kinetic vocal energy is closer in style to Captain Beefheart’s Don Dan Vliet, also a giver of deliciously mad performances. The fact that Henry’s tiny, elphin-like frame can produce such earth splitting volume is a source of wonder in itself. The Mojo Co. have dubbed their style ‘Freak-Bop’, which they describe as comprising a “combination of the principles of the BeBop tradition, that of establishing a musical theme for the purposes of improvising over the top of it, and the concept of Freakery, that of doing whatever the freak you feel like doing, however you feel like doing it. Freak-Bop”. Their sound is replete with the touch of so many diverse musical forbears. an overview might nod to avant-garde blues, rock, funk, psychedelia, and a whole heap more in the mix, all pulled together for a unique sound, delivered with verve and masses of oomph.

Frontman Henry possesses total star quality. He camps it up with dramatic theatricality, creating the impression that his entire self, every last bit of it, is being thrown with abandon into his performance, (no mean feat). He leaps and cavorts about the stage as though in the grip of St Vitus Dance. The wonderfully startling make up, together with his fabulous vintage dresses (tonight saw him in a 1940s ladies house robe in a fetching shade of cornflower blue), announce him as other worldly, of being in ‘the zone’, not unlike Bowie in the early ’70s.

Mad King Lud &The Mojo Co. are still a relatively new band, despite sounding as if they’ve been playing together for years. They clearly love what they are doing and this shines through every aspect of their performance. To be in their audience is an experience. One does not simply go to ‘see’ the Mojo Co. and their Mad King, It’s an event. Freak Bop.

Liverpool based ELEVANT, brainchild of songwriter, guitarist and vocalist, Michael Edward, were the perfect tour de force with which to bring this night to its spectacular close. They describe their music as ‘post punk psychedelia, art rock’ and have just released their third album, “There is a Tide” (March 2016) on the Loner Noise label. Michael Edward heads the multi-instrumental trio, with Tom Shand and Hannah Lodge forming a very strong rhythm section, on drums & vocals and bass & vocals, respectively. From the moment they thrashed out the first dirty, dissonant chords, it was evident that we had something a bit special on stage I wondered where they would take us. The short answer to that would be “everywhere”.

These are three extremely accomplished musicians, producing a sound that is raw, diverse, visceral, complex, haunting and driven. It’s easy to forget that there are just three people on stage, they play tightly together, creating a big, multi-faceted and exciting sound. The rhythm section are superb, the guitar work powerful and all of it very, very Loud..!

An impressive expanse of influential elements are woven into their sound: Hard rock, edgy art rock, punk, grunge, psychedelia, rock ‘n’ roll, blues and dark Latin beats among them. Edward’s lyrics are intelligent, knowing and darkly dystopian, sung with a cool passion, in a voice that ranges from barking rocker to charismatic crooner, reminiscent, at times, of Pearl Jam’s Eddie Vedder. He plays a great frontman, twisting and moving frenetically about the stage with an impressive energy and theatrical style. He engaged well with the audience, grinning a lot, joking (often at his own expense) and generally coming across as having a great time, as all three of them did. Their stage behaviour was witty and down to earth, with plenty of easy banter going back and forth. They came over as relaxed and happy to be up there, playing together for us.

All three of their albums are available on Youtube, but best experienced live, so if you get the chance to catch them play, do so! They are a hard working outfit, getting their music out there without the middle men (always impressive) and they’ve toured the UK multiple times.
Southampton does itself proud when it comes to live music. Tonight’s hothouse of up and coming talent was a great showcase for what’s out there, both locally and elsewhere in the UK. The players tore it up and rocked the house. My recommendation is to catch all or any of the above if they’re playing at a venue near you, while you still can.

Mad King Ludwig & The Mojo Co will launch their EP + Digital releases at The Joiners, Southampton on Friday 13th January 2017  – A curated evening of madness and delirium guaranteed!