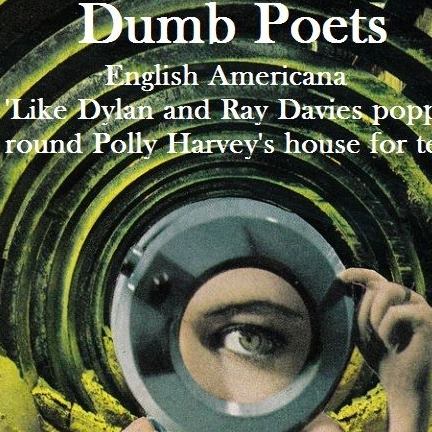 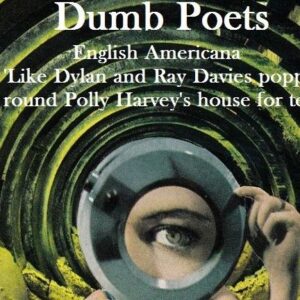 A new band from Bournemouth who describe themselves somewhat strangely as “English Americana”.

Many years ago there was a band who caused quite a stir in their hometown of Bournemouth called The Spoons. They were a decent indie-guitar, pre-Brit-Pop band who I seem to remember included in their number Steve Lillywhites brother. (This might be wrong…but it doesn’t matter because he’s not in this new band..) When they played Southampton venue the Joiners when it was still a pub called the Joiners Arms in the early 80’s I found them a bit too poppy and mellow for my-then tastes and I mentally filed them away under ‘a bit like Squeeze’. I probably meant it dismissively, but in retrospect. with the wisdom of my years, it could also be complimentary.

Dumb Poets main man is Lance Riley, a former-member of the Spoons and Dumb Poets are nothing like Squeeze. They are more like an English version of the laidback REM post-Out of Time, only on a smaller budget obviously.  The feel of Ray Davies is there too in Dumb Poets songs and it has that same kind of natural,  effortless songwriting where the songs are new but sound familiar. (Not in a heavy-handed, light-fingered Oasis way though).

Have a listen to the lead track, Blessings in Disguise and tell me this isn’t a classic songwriters song.

Intriguing lyrics. A distinctive voice and some great harmonies.  It is the ever-so-slightly Losing My Religion guitar which is the hook that I fell for initially.

The other two tracks on the EP ‘Blind’ (..leading the blind) and Arthur’s War are equally affecting though a little more downbeat. Of Arthur’s War, Lance had this to say on Facebook;

I wrote this about a year ago during the 100 years commemoration of the outbreak of the Great War. It’s about a feeling more than anything. My Grandfather was a batman for a rich man at Blenheim Palace (he also was a great violinist and musician) he was sent to France as a man servant for a man who was killed almost immediately and he was ‘lost in France’ He became a stretcher bearer and an ambulance driver in the Somme. The story in the song is not strictly ‘true’ as he didn’t shoot himself as I am here to tell the tale.  I was also heavily influenced by a Radio 4 documentary aired at the time of old audio interviews from the sixties, where the one particular soldier’s memory from that terrible time moved me greatly when he spoke of going over the top as ‘like a daydream’.   I wasn’t sure whether to post this up in case we are misinterpreted. Its just another song. Peace and Love x

Dumb Poets aren’t young firebrands or revolutionary, but I do really like the gentle, chilled out music they make ( play me ten bands of the same ilk and I will ‘meh’ ’til the cows come home).  Sometimes subtle, insidious tunes and melody can top brashness and hullabaloo.

I have dipped my toe into Americana waters, but somehow it’s not me. What I do like about it though is the ethos that quieter, melodic music made by older musicians is treated with respect by the audience and press and fans.  Hence, Dumb Poets calling themselves ‘English Americana’ is wholly apposite.  I actually can’t wait to hear a full album by them.