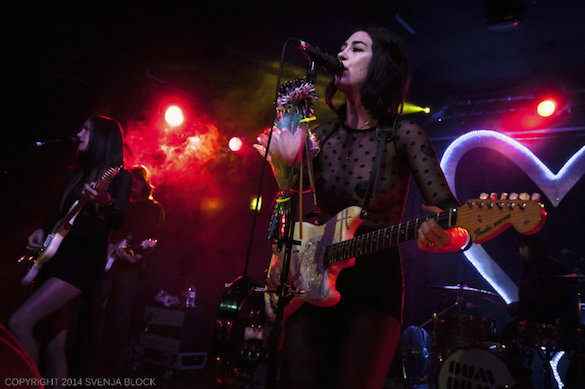 Dum Dum Girls make a welcome return to Dublin with another typically intense and dazzling performance. Ray Burke reviews. (Also accompanied with photos by Svenja Block in London at Scala on 1st May.)

Support tonight comes from San Diego outfit Crocodiles. Composed of Brandon Welch –  former Dum Dum Girls member and husband of front woman Dee Dee Penny – and Charles Rowell.  They are a fusion of New York punky guitars, a mash up of the expressively shambolic quality of New York Dolls and methodical droning of Sonic Youth. Exemplified by their bleary, distorted and inventively layered guitars and a programmed rhythm section. They are occasionally great, but there is an air of familiarity on several tracks. However, they perform with a certain stylistic panache that ensures it never becomes completely regressive, facilitated by much explosive instrumentation and energetic swinging of guitars. 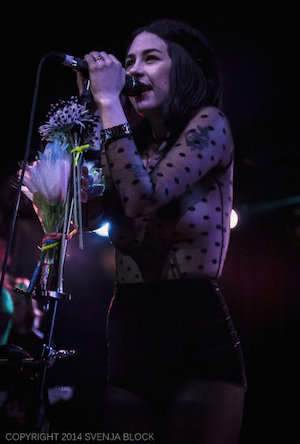 Investment in a touring live rhythm section might be what the band needs to elevate them further.  When Rowell lets loose he looks strangely isolated on stage, not being surrounded by other band members. There are more involved in the production of albums, so maybe it was budget constraints that contributed to them touring as a duo. Highlights include the addition of a third guitarist who has travelled with them, she can later be viewed at the sound desk during the Dum Dum’s set. Dee Dee herself arrives on stage for the final number I Wanna Kill from the Crocodiles album Summer of Hate.  It’s a highlight and really whets the appetite for the upcoming collaborative Haunted Hearts (Dee Dee/Brandon) album and follow up to 2012 single Something That Feels Bad is Something That Feels Good.

Dum Dum Girls  take to the stage shortly after. The large love heart background that hung through the support is now cast with an atmospheric blue hue. The seemingly sparsely populated Button Factory looks pretty full now, and when they open with a glorious Bedroom Eyes from Only in Dreams there is a slight surge towards the floor. The first part of the set relies on earlier material and they run through their own brand of garage rock, a mix of hazy sonic noise, dream pop and loud guitars with precision.  Sixth song Too True To Be Good is the first from this year’s critically lauded Too True.  It’s followed by Are You Ok? from the same album, which is one of several highlights . The bands tendency to deliver goosebump moments are littered throughout. The finishing harmonies on It Only Takes One Night  sound immaculate and Under These Hands is impeccable. The perfect example of how all the parts and influences of the band can align to create a perfect slice of garage influenced dream pop.

Rimbaud Eyes takes it up a notch, it’s a heavier more energetic number and is another highlight. The pockets of the audience that have been swaying and dancing have now infected the remainder of the static crowd. That momentum persists to the end. Crowd interaction from Dee Dee is at a total minimum; there is an air of studied cool about the band that is maintained until the final number. Dee Dee thanks the crowd acknowledging someone specific, her face lights up as she smiles and waves, after an evening of feeling a distance between crowd and band, it feels enchanting to see the cool façade fall away and for a softer side to appear.  The methodical stage presence never detracts from the lyrically haunting and expertly crafted numbers. Theirs is a visually arresting aesthetic and the studied approach ensures a tight performance.  Joining Dee Dee, Jules and Malia, and touring member and guitarist Andy is a male drummer replacing Sandra “Sandy Beaches” Vu. (Sandy had been playing earlier on this tour, and with no formal announcement of her departure, it’s fair to assume her replacement is temporary). Whether grasping her guitar or tambourine, Dee Dee stays perfectly still in front of the mic.  The expressiveness and emotion in her voice always in conflict with the premeditated poise. The set comes to an end with another highlight, an excellent energetic jangly guitar version of the Pale Saint’s Sight of You. Another demonstration of perfect harmonising from the girls.

The on-stage frostiness has a strange effect on the crowd. When the band leave the stage there isn’t the usual cry for more. It’s clear we do want more, but maybe we’re just trying to be as measuredly cool as them. Anyway, there is no delay before they return to the stage, and the dark Lost Boys and Girls Club from this year’s mostly brilliant Too True is the first of a two song encore, but it’s the final encore, Coming Down, that is the absolute highlight, the ethereal quality of Dee Dee’s voice is both captivating and mesmerising , from the beginning “I take as much as I can get, I don’t take any regret.”, through to the chorus of “I feel like I’m coming down…”, it’s heartbreaking and  vivid.  The Velvet Underground musical ruminations that vibrate through the hall create the effect of time having drawn to a standstill. The Button Factory could fall down around us and we’d still be there, transfixed. It’s a complete contradiction to  how they are often described, no one is gazing at their shoes. When the band leave the stage, that’s where we stay. In a sort of rapturous reverie.  An excellent end, to a spellbinding performance.

They are on Tour now until August. Check for local dates.

Too True is out on Sub Pop now.

All photos and by Svenja Block. You can find more of Svenja’s photos at her Flickr or on Facebook.