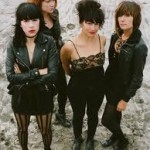 Although we’ve already had one review of LA noise pop band Dum Dum Girls on Louder Than War this year we haven’t had one from Bilbao yet. Until now.

When I was asked by my mate Rob if I wanted to go to Bilbao at Easter weekend back in the Autumn, I hardly put up a huge act of resistance. I’d never been to the Basque Country before, and it was a few years since I’d been to Spain. About a month before the gig, a quick visit to last.fm showed that the rather fantastic Dum Dum Girls were playing, the night I arrived. Tickets were quickly acquired, and first night holiday entertainment sorted.

Kafe Antozkia surprised me when I arrived. Half expecting the place to be something resembling Manchester’s Night and Day CafÃƒÂ©, (it’s website offers Daily menu’s, corporate lunches and buffets), the venue itself is reminiscent of lots of town hall venues, albeit on a smaller scale. The venue itself could easily hold over six hundred when full, although on this night I would estimate there were about four hundred in attendance. One of the most notable things about the venue was the total lack of security. I didnt see any in the venue itself, and only one person at the door. The stairs leading up to the stage itself were also strange. Combined with the total lack of meaningful security, it was almost politely inviting people to launch a stage invasion.

When I asked one of the venues staff who the support band was, I wasn’t exactly helpfully told “some girls from Barcelona.”Â Although I didn’t find out their name until after they had played, Arponera were an excellent support act. Three girls from Barcelona, Fani on Guitar, Keyboard and lead vocals, Sara on bass and Elena on drums. Aponera play English post punk music with Spanish lyrics. Sara on bass wearing a Bauhaus t shirt with a playing bass lines with clear influences from the usual Post punk suspects. Fani moving between guitar and keyboards like Gillian Gilbert in early New Order gigs. It sounds like something which shouldn’t work, but does. Short, sharp songs, consisting of a multitude of influences. The highlights of the set were a great song called “Hepatitis”Â, which had a robotic like, almost Kraftwerk style to it, and storming set closer “El Bosque”Â, a fast paced punk song, emphasising everything that is good about this band.

I first discovered Dum Dum Girls last year when I was made aware of a storming version of “There is a Light That Never Goes Out.”Â Further investigation has led to the discovery of two rather fine albums, with the debut I Will Be especially outstanding. With influences ranging from The Cure, The Jesus and Mary Chain, Mazzy Star and the Ramones (check out the bassline on “It Only Takes One Night”Â- Dum Dum Girls stole it before The Vaccines even formed).

With fantastic stage presence, Dee Dee on vocals and lead guitar giving off the presence of a legitimate star, befitting on a much larger stage than this one, and a super tight band consisting of Malia on Bass, Jules on Guitar and Sandy on bass, it would be hard to go wrong in a venue such as this. Despite this, Dee Dee seemed particularly agitated at the sound mix, with her vocals being especially quiet. The band however played on, at quite a speed, never stopping to say anything to the audience, who if not entirely captivated by the gig, were certainly polite and respectful. Considering the fact that there were four attractive girls playing on stage, and three earlier in the night, it was quite a nice surprise to NOT to hear disrespectful/offensive cat calling from the audience at any point in during the gig.

Despite a somewhat lacklustre audience, and the minor issues with the sound, which were rectified, midway through, Dum Dum Girls played a blinding set. First album favourite I Will Be was an early highlight with Dee Dee screaming the chorus in a manner not dissimilar to Siouxsie , although the highlight was the double header “Bhang Bhang,”Â with its almost joyous and playful chorus of “Bhang Bhang”Â followed by “are you dead?”Â, and the resignation of “Jail La La”Â with its lyrics of “don’t tell my father, don’t tell my mother, they’d die to claim me, way too fun was their daughter.”Â The only lowlight of the set was “Hold Your Hand”Â which was far to slow paced and sounded like a Bangles reject. After going off for the most pointless encore (seriously, they walked off and walked back on about twenty seconds later), Dum Dum Girls played a stunning cover version of Pale Saints “Sight of You.”Â This was a fantastic set, and it was quite sad to realise it would be a while before I had a chance to see them again. Hopefully, it wont be too long though before I get to see this underrated and underappreciated band again.