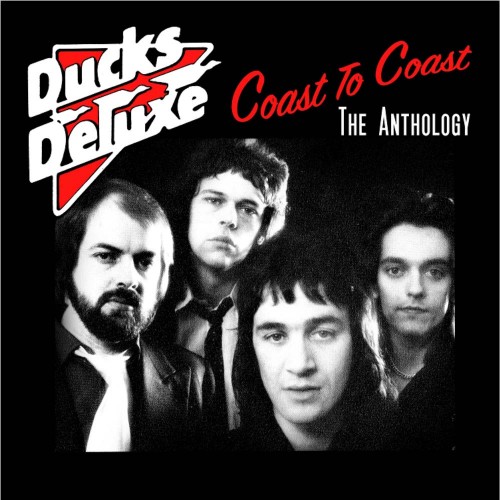 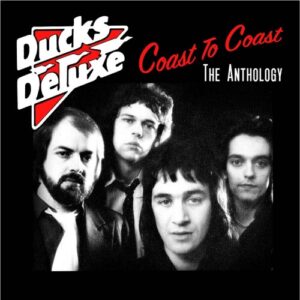 If the Tyla Gang was completely Tyla’s creature, Ducks Deluxe was a much more democratic outfit. Formed by Tyla after his short tenure in Help Yourself, the band soon settled on the line-up of Martin Belmont (lead guitar), Nick Garvey (bass and vocals), Tim Roper (drums) and of course Sean Tyla (vocals and rhythm guitar). The band living and rehearsing in a squatted house in Camden Town hit the ground running and soon began a bi-weekly residency at the Tally Ho pub in Kentish Town, following the footsteps of Eggs Over Easy, the american trio who can be considered the primal pub rock band.

The band’s reputation as a rather fiery live act (see the video at the bottom of the page for a perfect example) was a bit of a double edged sword when it came to recording their first LP but “Ducks Deluxe” is a great debut. Wisely starting with the frantic “Coast To Coast”, the record bursts with energy. Garvey takes the lead vocals on a rambunctious cover of Eddie Cochran’s “Nervous Breakdown” and brings a pleasingly merseybeat ditty to the table with “Please, Please, Please”. Tyla on the other hand excels at churning out excellent rockers (“Don’t Mind Rockin’ Tonite”) and wears his influences on his sleeve (“Fireball” displaying a clear Lou Reed feel and chord progression). Having been a songwriter for hire in the early seventies might explain his eagerness at trying multiple musical styles on this LP as proven by the soulful sheen of “Falling For That Woman” and “Too Hot To Handle”. “Hearts On My Sleeve” and “West Texas Trucking Board” show a country influence that was found in all the early bands of the Pub Rock scene (“Eggs Over Easy”, “Brinsley Schwarz”…). As per tradition in this kind of anthological ventures, the original album is expanded with a flurry of bonus tracks with some surprisingly well sounding demos (“Freeway”, “I’m Your Lover”, “The Duck”) and a great version of “I Fought The Law”.

The Duck’ss second album “Taxi To The Terminal Zone” marked the recording debut of keyboard player Andy McMaster who had been playing with them live for a little while. Produced by Dave Edmunds, it is a more polished effort but some of the songs retain the energy of “Ducks Deluxe” especially rockers such as “It Don’t Matter Tonite” and “My My Music” (where McMaster’s rollicking keyboard works wonders). The thing that strikes the most is the increased presence of vocal harmonies on most of the tracks compared to its predecessor, maybe something Edmunds suggested as he was quite well known for laying layer after layer of vocals on his own records. The catchy “Love’s Melody” is probably the band’s most commercial track. However cracks were showing at that point and Garvey and McMaster decided they wanted to quit the band shortly after. The band soldiered on for another year with a line-up including ex-members of Brinsley Schwarz and even released an EP and a single, all of them featured here as Bonus tracks but decided to call it a day with a final gig at the 100 Club in July 1975.

However Tyla after several years away from the music business decided to reform Ducks Deluxe in 2009 with Martin Belmont. The reunion worked well and they entered the studio to record a mini-album titled “Box Of Shorts” produced by former Chilli Willi and the Red Hot Peppers bass player Paul Riley. The band has slowed the pace a little but Tyla is still in great voice and Belmont’s Stratocaster twangs delightfully on a cover of Bob Dylan’s “Absolutely Sweet Marie”. The rambunctious rocker “Diesel Heart” could have easily fitted on their debut released more than thirty years before. The rest of the tracks come from a compilation titled “Side Tracks and Smokers that was released in 2010 and from the live album “Rockin At The Moon” recorded at The Half Moon in Putney in 2012 where the band fires on all cylinders and more (particularly during the sequence featuring “I Don’t Mind Rockin’ Tonight”, “It’s All Over Now” and “Coast To Coast”).

For further info on Sean Tyla you can check his official website: www.seantyla.com. He’s also on Facebook.