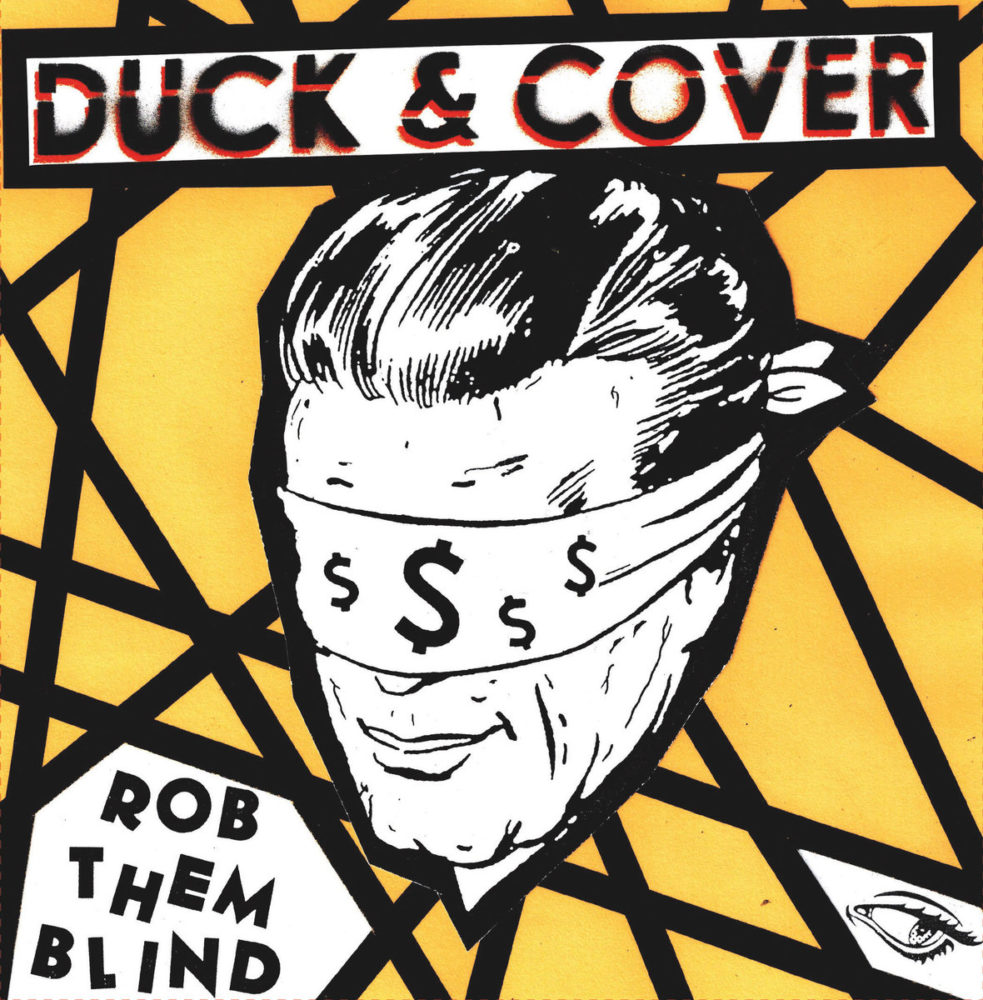 Boston quartet Duck & Cover release their new mini-album, Rob Them Blind, pulling in a cornucopia of styles from the last 40 years of rock and wrapping them up in a hook-filled, arena-aspiring modern rock record.

Like a kid in a candy store that wants to lunge for the cookies while his hand’s still in the liquorice jar, devouring and salivating over all the options, Boston’s Duck & Cover are rock music’s equivalent. Pulling in punk, glam, garage, powerpop, and hair metal stadium wizardry, they plunge themselves shamelessly into each song’s chosen style and come out at the same time with a mini-album that, pulled together as one, almost makes perfect sense.

They kick off the record with Live It Up and pin their aspirations to their sleeves from the off with a Cheap-Trick-meets-Joan-Jett stomper of a tune replete with crunching guitars under a pure and unadulterated pop-rock melody and flying hooks and riffs. It sucks you straight into the record and sets you up for the rolling and rollicking Borrowed Time. Vacancy has a more new-wave feel to it, especially in the way the verse melodies roll out in an almost Elvis Costello manner, although the double-tracked vocals are always aiming for that powerpunk sound. Wasted calls to mind The Replacements and is one of the clear highlights on the album, the track where everything they’re aiming for seems to drop perfectly into place. The band sign off the record with the most forceful of the eight songs, Touch And Go. It skirts closer to a more metal driving sound and drops in a pure hair metal solo, which is pulled off fantastically. While the song is quite strong, it’s a slightly jarring finale as the band step away from the feeling that is created by the preceding seven songs.

On Rob Them Blind, Duck & Cover show that magpie robbery is a game that they want to excel at. Most of the time they pull off the collection of rock genres well and combine them with style. The songs are stronger when they’re hitting more on powerpop melodies, as the majority of the record does, but they should maybe keep an eye out to not step too far from where their north lies.

Listen to Wasted from Duck & Cover’s mini-album, Rob The Blind, below: