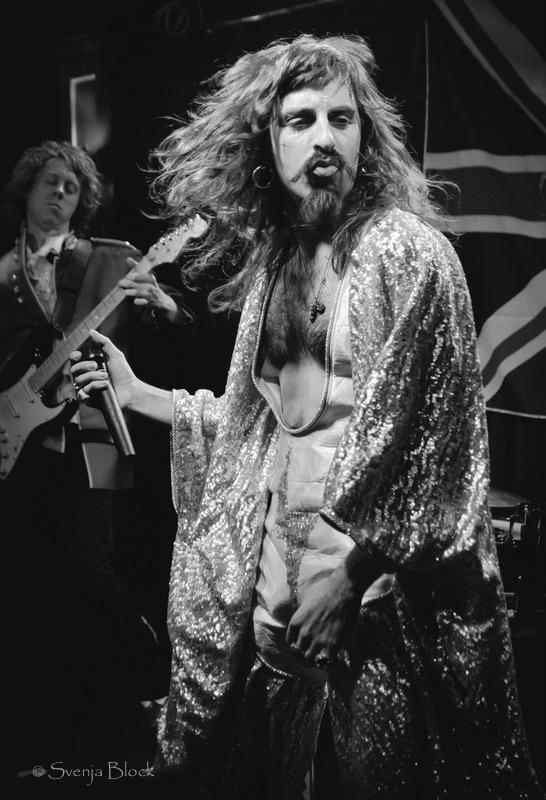 One of London’s most exuberant bands play at one of Camden’s best music venues. Photos by Svenja Block and words by Craig Chaligne.

Duchess are a band that have been playing all over London since 2013 and are definitely one of the most flamboyant combos you can catch in the capital. Lead by the charismatic Sir Freddy Vintage, the band thanks to constant rehearsals and gigging has become a fantastic live act. The current line up including bass player Jack Walsh has been together for two years and are able to hold down a solid groove that enables their charismatic frontman to pretty much do anything that crosses his mind (whether that’s parading on the bar counter or sharing some love with audience members, preferably female :)). The band are dressed for the part with the rhythm section sporting some seventies attire that certainly must have kept them warm on stage (drummer Felipe dropped his sleeveless zebra jacket after a few numbers). I didn’t keep up with Freddy’s costume changes but they certainly were numerous and extravagant.

Duchess are a good time band, they want you to have fun with them and the whole show and the way they carry themselves prove that. Most of their tunes have a glam-rock stomp that settles straight away for maximum efficiency. The first number of the night “Are You Tuned ?” rocked like a classic from the seventies. Johann riffed and soloed displaying a clear influence from Jimi Hendrix in his playing while Jack’s bass grooves anchored the whole thing. Felipe had some difficulties with his snare drum stand but kept the beat going regardless. Far from being a one trick poney, they threw in an excellent slower track entitled “Modern Times” plus a few new tracks written over the past couple of months.

Duchess will be playing at Camden Rocks Festival on the 4th of June.

All words by Craig Chaligne. More from Craig can be found at his Author Archive. He tweets at @ChaligneCraig. Photo taken from Sid Griffin’s official website.