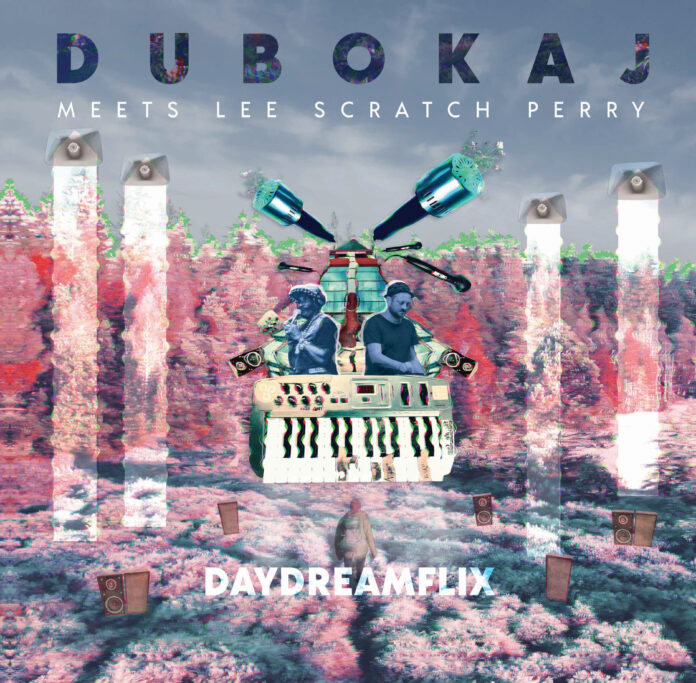 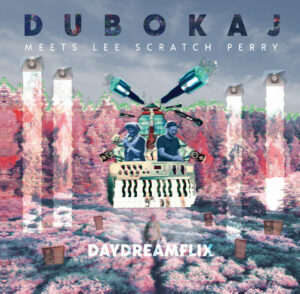 Imagine heaven resides in the Swiss Alps. Or, at least it’s a musical match made in heaven: Dubokaj Meets Lee Scratch Perry, the Daydreamflix LP. This is Alpine Dub with some L$P Alpine Love: environmental music for all generations after the quarantines of the pandemic. The Daydreamflix multimedia project offers an escape from the madness into pure dub art insanity.

Just like Salvador Dali and Louis Bunuel working on Le Chien Andalou, but instead of razors and ants, Dubokaj and Lee Scratch Perry use outboard gear, synths, environmental recordings and magical dub poetry to create their own x-ray of songs craft and the production process. It was a jamming melting pot that got had them flying on the wings of Alpine Dub like two dervish dancers.

This may sound sinister, but this sounds like a self-portrait epitaph which was painted five years ago. 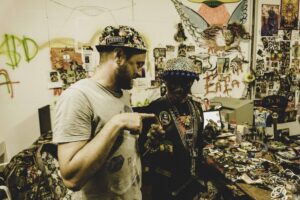 On Dub Breeze, Dubokaj is in full dance-floor modus: a steady pulse of a kick drum, almost motorik like. While L$P whispers autotuned, drowning in the mix, leading us like a shaman. The use of reverb and delays, plus feedback, are pure bliss: transporting us into another dimension where people are fish, dancing together in an ocean of swirling colors.

In The Moon Yeah is on the other hand is a continuation of the riddim state of mind, with arpeggios coalescing into a riff and ripping along like a runaway train, creating sweet staccato sounds. This is a massage for our ears; we are the passengers. The mighty Upsetter is just the ticket controller, briefly popping in to ask us for the tickets and making sure we know our destination is Earth’s satellite: ze Mun.

Mountainwater begins with a shoutout to the record label Dubokaj co-founded and where he released his previous albums. You can almost sense the storm outside of the house where Dubokaj was clashing with Lee Scratch Perry – the field recordings clearly capture a sound picture of a door slamming. The concept of the album is one of the disruptive attention span and the journey from virtual realm into reality and then back again. The synth riffs almost act like doorways: they soundtrack the way we turn our computers and laptops on and off, but the latent feeling is that we are actually commuting between nature, the Swiss mountains and an in door space. Maybe we are in front of a screen watching something on Daydreamflix, your favourite Dubokaj & L$D surrealist broadcasting channel. This is the last episode of Black Mirror. Perry is, of course, a much better version of Hannah Montana!

The song Hahn Solo is a field recording lover’s wet dream. You get to hear birds, water flowing, wide open spaces and splashes of synths over a basic riddim. It sounds like an electronic interpretation of nyabinghi music. This is the deepest ambient healing session you could possibly imagine!

Rotterdambi follows suit with an ambient dub feel and an exorcised techno riff. Who sedated the techno star? This feels like walking outside of the boundaries of dream, with a perfect soundtrack, what you see is what you get, and Dubokaj loves to paint a picture with his music. No wonder he has a few film scores in his portfolio already!

With Dubmarine Hanna you get a dizzy pulsating dub synth groove and cut and paste vocals: “I’m not a devil, I’m not a rebel”. Hypnotic repetition would be the phrase to describe dub and this song is IT. 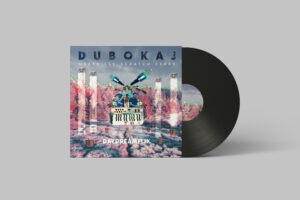 Working Man is ambient dancehall riddim starts you start to hear birds chanting in synch with the beat. Such a in-depth attention to detail shows Dubokaj’s tendency to be a mixologist poet, if not a sound collage master. Dancehall with birds, now that’s a contemporary music concept right there. The synth stabs on the outro remind me of Blade Runner and that is the proper way to end a bird riddim collab: with a touch of Vangelis.

Planiemore Collage completely reworks the intro song into a syncopated wall of ambient delay. I enjoy the loose space and the air this song offers, there is enough room here to breath for the whole Terracota Army of Qin Shi Huang. Perry invites us to go to the Moon with him, and the delayed synths really accentuate his subtle „realistic” invitation.

Piranha has literally crickets creating the riddim for L$P and is one of my favorite songs on this LP. It certainly has the deepest, most eardrum shattering bass and the most gentle water surface echoing dubby arpeggios. Rainwater in it’s purest form sank into this song:

Titanic Eight is a synth line driven tune. Like a very natural landscape crescendo, you can just imagine an uptempo bike through the mountains: the hills and valleys just unfold for your ears and eyes to consume. L$P is a distant guide, almost whispering directions, like holographic projections on stones and cliffs.

Daydreamflix is, on the other hand, a proper dub collage, with piano stabs, heavy reverberating echoes and more dub poetry from Perry. The man paints a vivid pictures of the biggest joys one can face living in the Swiss Alps: sunshine, green grass, the wind, sounds of animals and birds… tranquility.

The next song Dubmarine is about musical genesis, while Lee invokes Jamaican Reggae, Dubokaj hints at it with his own sonic arsenal referencing the music of this special Caribbean island. The song has the feel of a riddim, almost a stepper, but a chill ambient stepper, with splashes of synths almost like a duppy horns section. The sonar echoes drop deep under the Alpine Imaginary Sea, and boy what images comes to life: devils are closing in and the deep ocean darkness envelops. 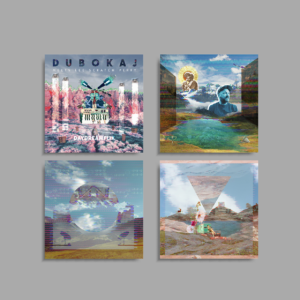 Drangsville Drowns is a broken beat with synths, once again, jamming along like trumpets, trombones and saxophones. If someone were tp pull the tempo way down and low on a rocking Skatalites song, this might be the result. Just imagine, and Dubokaj surely can, the Skatalies and Don Drummond + Tommy McCook + Rico Rodriguez going full ambient. It works like magic!

Sunshine really brings tears to my eyes. It shows Lee Scratch Perry’s love for soul music. The Temptations I Wish It Would Rain tune is almost a lullaby for the Upsetter and I can imagine him singing this for his children to sleep, three decades ago. His love for African American music was evident in the sixties and seventies and most producers working with him tried to emulate his innovative dub sound, sometimes getting too far away from his heart and soul. Dubokaj tweaked this and layered it with a bedrock of chill synths with great results.

Cover Me once again shows dub techno riddim master Dubokaj at work, effortlessly pulling out beats, synths and saxophone stabs, while Lee Scratch Perry is in a singing happy mood, even though the images are a collage of street symbols, blue covers, red wine stealers, killers with firing guns next to the situation in Israel. Was L$P a political artist until the end? It seems so and Dubokaj offers the perfect soundtrack to his magical madness!