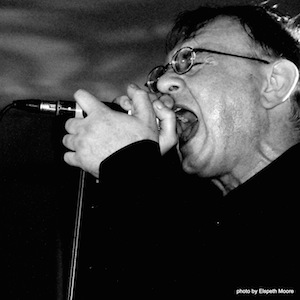 Photo of Dub Sex above by Elspeth Moore

Middle age suits some bands- for a boy band it must be living hell but for those kind of groups that make the grit and grime of reality their stock in trade creeping age is a plus- it adds a further darkness to their already uncomfortable noise and a certain maturity to their discipline.

Dub Sex re-emegence after two decades is like everything and yet nothing has ever changed. It’s like they blinked and the centuries turned and they came back and sounded like the same glowering, glowing, fierce juggernaut of apocalyptic noise. Tonight was proof of the timelessness of this sound – this attractive hurricane of danger from the industrious industrial guitar to the throbbing bass and the of kilter rhythms.

Dub Sex are one of the great lost Manchester bands- a more feral and darker undertow of outfits who operated in the hinterland between post punk and Madchester. A time of Hulme squats and post industrial malaise when being dark and disturbing was quite a thing.

Obviously loved by John Peel they made an unsettling, yet hypnotic grinding music with these great loping bass lines and were fronted by the charismatically awkward Mark Hoyle whose twitching presence and unique hollering and impassioned vocal style defined the band.

After a flurry of releases they imploded and returned briefly as Dumb before maintaining a radio silence for the endless years before this sporadic return with a couple of singles coming out on Tim Burgess’s O Genesis label and some festival slots promised and a chance to revisit the sound track to manchester’s Hulme estate when it was concrete craziness and 48 hour party people and the sun never shone – you know – all the good stuff.

More of Elspeth’s photos from this gig below or go to her Louder Than War archive for even more of her work.