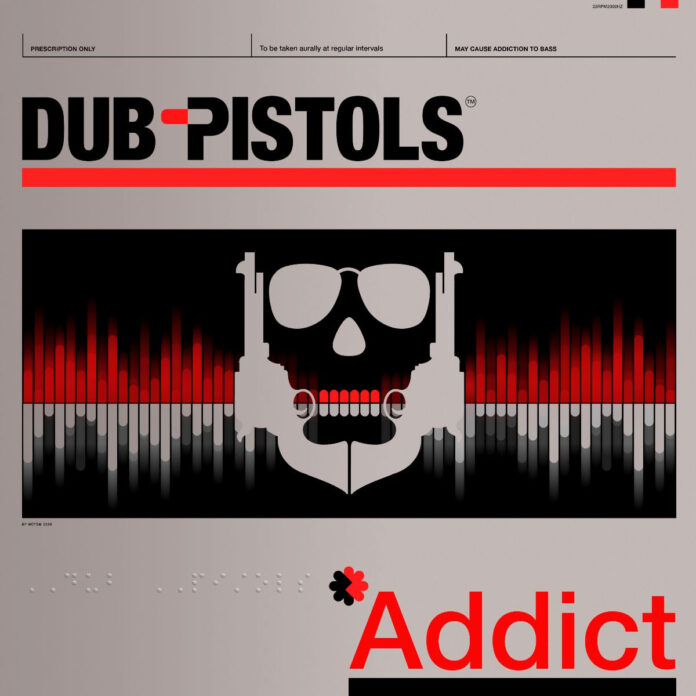 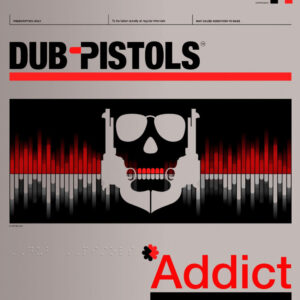 Dub Pistols are back with album number nine and hark back to the days of their debut Point Blank in many ways, with a full on rush of jungle / dub bass whoppers to get us on our feet. Wayne AF Carey turns up the dial…

What a refreshing change to a year of mostly angry music, rallying against the fuck ups that run the world, who keep us guessing at what they’re going to do next to make us keep in line. This is where the party starts right? Not exactly, yet when you hear this you’ll be craving for an illegal rave (socially distanced of course)… Please read responsibly.. As Fuck…

Dub Pistols mastermind Barry Ashworth says: “I recorded over 3 albums worth of music to get to the finished version of Addict  “Every time I finished a song, I would come up with another idea for a track and an artist I wanted to work with. It’s been incredible to collaborate with all the legends that I have on this record, but it’s also the new emerging talent such as Natty Campbell and Gardna that have really given me new enthusiasm.  The album has taken two years to record but has been 25 years in the making.”

It bangs straight in with Addict featuring Cheshire Cat, a hard as fuck jungle drum n bass stormer that has me yearning for the drum n bass nights back in the mid nineties, in the underground darkness of The Music Box on Oxford Road, shady characters in corners, junglists going mental on the tiny dancefloor, the breakbeats trembling down your wonky legs. “Addicted to the bassline” Fuckin’ right! Dark Days slows down the pace with a message from stalwart MC Navigator and regular DP guy Seanie T, about getting through these heady times, sounding funky as fuck in the meantime. Manchester collective The Moods are good at this type of thing as you can hear in their last sing The Rise And Fall Of America. Dark and uplifting.

Old Skool is a dub reggae celebration with some great toasting by Horseman. A proper head nodder full of joy and whoo haa’s, boomshakalacks aplenty. A nostalgic romp and a tip towards the old skool (like it says in the title). Stand Together is pure Two Tone, especially when you have Rhoda Dakar from The Bodysnatchers as guest vocalist, telling us about the battles against racism and how we’ve come far but have a long way to go. She’s still got it and this shines like a bright star on an album full of little gems.

Chalice featuring General Jah Mikey kicks you in the face with the junglist sound again. An ode to smoking the ‘erb if you’ve ever heard one. It’s a rollercoaster of a ganja filled journey. “Pass me the chalice in a circle”?? You’d fuckin’ drop it at this pace! A classic example of jungle at it’s best. Natty Campbell is introduced on this album as a force to be reckoned with, a young MC with a great toasting style on Wicked & Wild and a great addition to the Dub Pistols sound. Dub Reggae at it’s best showing that true Jamaican style.

Lindy Layton makes a top as fuck appearance on the chilled out dub of Cool Out. For the geeks out there she’s one of the founding members of Beats International and has that great vocal that soars and makes you smile. Two Generals ups the pace again with The Ragga Twins stamping their authority all over this mental drum n bass shit kicker of a tune. A highlight that makes you dance like a fucker. It’s like jungle has never been away. Shit, I nearly crashed me car listening to this! A proper dance floor dropper and builder. Mental.

Sound Sweet keeps that pace going from the kick off, then slows down for some more Natty Campbell toasting before flying off into jungle cyberspace again, with some awesome bass wobblings making shapes in your face. Boneshaking headfucking soouunnddss!! And it’s about weed. Talking of weed, next track needs no explanation if you’ve seen Withnail & I. If you haven’t then you’re a disgrace. A class clip of dialogue from Danny the dealer building the now infamous spliff of mindblowing proportions, the Camberwell Carrot that fucks up the posh boys. A proper skanking tune that goes up and down in scales from dub reggae to bass laden junglism in one swoop.

Cheshire Cat ends the album with a classic lesson in toasting on the excellent Soundboy. A tutorial in toasting to show the young ones an A level piece of skill.

A brilliant return to form for Barry Ashworth and his crew of sprawling talent, this is probably the best album since Point Blank and it’s a shame we can’t see this being toured in all it’s glory at the moment. A healing refreshing album full of bouncing tunes that make you happy and crave for our much missed live scene more than any release this year.

Fuck the government and fuck the Tories…

“ ‘Stand Together’ was written about how far we’ve come, but how much further we still have to go when it comes to the fight against racism.  We used footage from civil rights movements as the basis of the video and now to watch what is going on over in America and how racism is still so seismic in our society is devastating.  We need to stand together, learn from history, and move forward –  united.” – Barry Ashworth

“If you reflect the world you see in your lyrics, events will always catch up to you. Sometimes that happens sooner than you expect. #StandTogether” – Rhoda Dakar