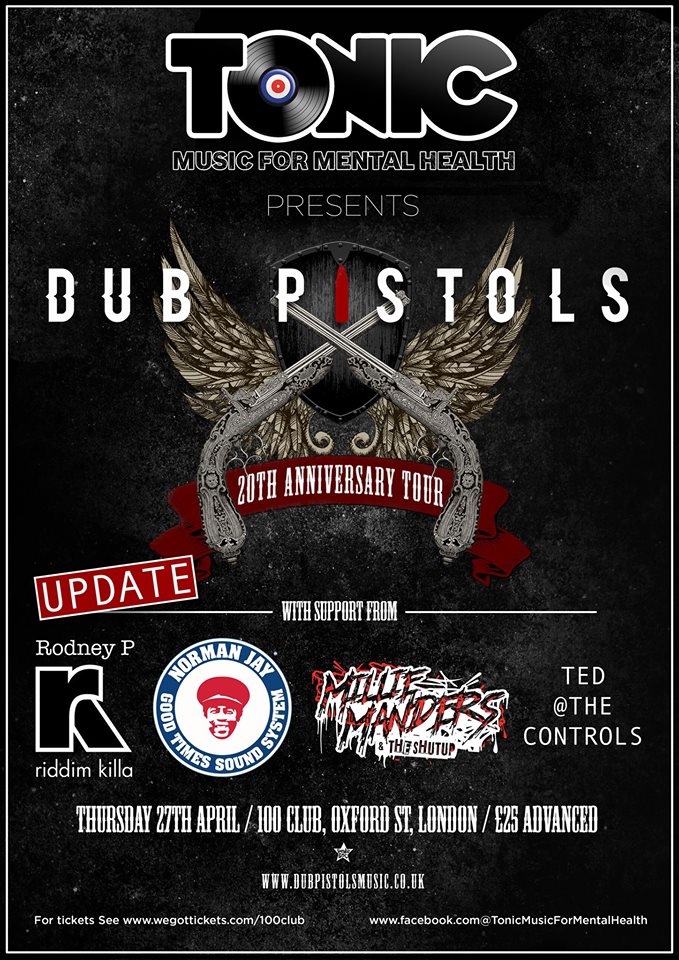 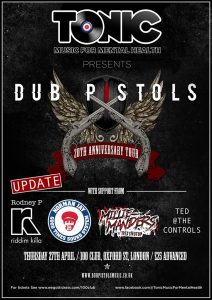 Dub Pistols…As they gear up to celebrate 20 years of riotous marauding, the Dub Pistols are prepping their seventh as-yet-untitled album in 2017 and there’ll be a documentary about the band dropping at some point in the year, too. And they’ll be out on the road, as usual, of course — the hardest working band in showbiz.

A kinda 21st century equivalent of 2-Tone acts The Specials or The Beat, the Dub Pistols are the quintessential festival band. Coming over a bit like if King Tubby and The Skatalites bumped into Terry Hall at a Goldie gig, the Dubs have reached their two decade milestone with a lot of ups and downs along the way.

The rhythm section of Jack (drums) and Dave (bass) are granite-solid, and guitarist Andreas (or sometimes the rock & roll stand-in, Johnny Rockstar) provides all sorts of licks and skanking chords to nice up the dance. The brass section is on fire, and rapper Seanie Tee brings the mic skills to complement main man Barry Ashworth perfectly. They’re a proper gang of outlaws, rebels with a cause, renegade outsiders who know how to bring the good times. If you haven’t seen the Pistols yet…

Leaping about like a salmon, stage-diving into the crowd, getting sweaty with the throng and then standing for selfies with fans afterwards, Barry is a talismanic frontman — his exuberant presence at the heart of the band is the glue that ties it all together. On a level with the crowd, he’s blossomed into one of the music scene’s great characters. He may be somewhat calmer these days — why, he’s even taking flying lessons at the moment, for chrissakes — but still likes to cut loose at opportune moments.

Barry might be the heart, face and mouth of the Dubs, but they are still very much a band — as tight as fuck, and yet able to cut loose to rock venues to the core. Tracks like epic drum & bass cut ‘Gunshot’, ska ditty ’Problem Is’, early beat-freak single ‘Cyclone’ and singalong anthem ‘Mucky Weekend’ have become firm fan favourites, and onstage see the band getting deep, down and dirty.

Long may the Pistols continue to mash up the place!

Rodney P, also known as Riddim Killa, is widely regarded as the Godfather of British hip hop and has inspired a whole generation of British MCs and producers. He started out in the 80’s as a member of the highly influential hip hop group London Posse who were invited by Don Letts and Mick Jones of The Clash to support their new band Big Audio Dynamite on tour.

Norman Jay MBE is an internationally acclaimed DJ and is highly respected as co-founder of the legendary Good Times Sound System (playing funk, soul and disco at Notting Hill Carnival), co-founder and prime selecter of London’s dance music station KISS FM and, alongside Giles Peterson, founder of the Talkin’ Loud record label which has heavily influenced the Acid Jazz scene. Norman continues to work as a broadcaster and remains at the forefront of club culture, championing new sounds whilst never forgetting his musical roots.

Millie Manders & The ShutUp…Millie creates cross-genre punk that is hard to ignore. With lyricism that pokes fun, draws you in or leaves you questioning social norms teamed with incredible vocal dexterity, grinding guitars, irresistible horn hooks and a pumping rhythm section, the Millie Manders Music Machine churns out more raw punk fusion than you can shake a stick at, with a huge amount of Pop appeal.

Ted @ The Controls…This young selecta will be bringing you the sweet sounds of Jamaica!

Tonic is a not-for-profit organisation established in 2012. They are honoured to have both Terry Hall and Kevin Cummins as patrons. Tonic raises awareness and challenges the stigma often associated with mental illness through music and art based events, gigs, workshops and support.

All profits from the gig will be used to host a free all day music workshops at the 100 Club.

(Full disclosure – pretty much all of the above is taken from the press release and not written by me, Ged Babey, but every word is the truth baby, I have met the ladies from Tonic and they work hard for cause and the Dub Pistols are a great band, who will be explosive in the confines of the intimate and legendary 100 Club. )