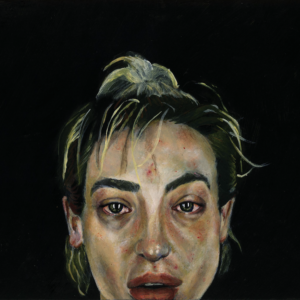 ‘Lung Bread for Daddy’ is a wacky and wonderful record, filled with both moody and outrageously fun songs. Du Blonde has created an album unlike most that are released these days, and she remains unafraid of going to vastly unexpected places throughout its runtime.

Opening track ‘Coffee Machine’ flows smoothly on from it’s very first wavy guitar chord. As a listener you begin to think you’ve grasped an idea of what this record is going to sound like, until you witness Du Blonde boasting her ambitious musicality. She does so by intensifying the song for a rowdy finish, backed with screaming vocals and heavy, distorted guitars. This is one of the great strengths of the album; you never quite know where it’s going to go next.

‘Baby Talk’ comes packed with a robust guitar riff, featuring some seriously gorgeous tone. This blends together brilliantly with Du Blonde’s vocals, which always sound unique. Her delivery is moody and the her songwriting embraces that completely, giving each track a darker tone than your average crystal-clear pop vocal ever could.

Previously released songs ‘Holiday Resort’ and ‘Buddy’ fit into the tracklisting perfectly. Though the album never fears to jump around stylistically, the off-the-wall lyrics and grunge-licked guitar style that show up on most songs, keep it from getting too far off it’s leash. Nevertheless, the two previously mentioned tracks certainly don’t shy away from leading the record to new places.

Many songs on the album leap from a calm sound to a brasher, more outrageous section and it’s often impactful. But, ‘RBY’ tees up it’s electrifying power even more effectively, with the most tender of touches. The vocals sound beautiful and when they take a pause, they do so to unleash a classic-rock sounding guitar, that buzzes its way to the songs glorious finale.

‘Heaven Knows’ is epic in both it’s sound and production, allowing Du Blonde show off her great vocal range. The higher notes she howls out while singing the words, “Baby can’t you see you’re killing me” sound haunting and doused in emotion.

Du Blonde creates all kinds of eccentric imagery with her lyrics throughout ‘Lung Bread for Daddy’. Not a single track passes by without spinning out some quite crazy lyrical ideas but, it ends up working almost every time. It doesn’t fall into the trap of being obnoxiously artsy or taking itself far too seriously and instead, fully commits to its creativity and delivers it with flair.

Du Blonde has revealed herself as an ambitious songwriter, with a record that’s anything but stale or predictable. ‘Lung Bread for Daddy’ is as outrageous as it’s title suggests. That outrageousness ends up being its biggest strength and moulds together beautifully moody vocals, wildly distorted guitars and skilful production to create something that feels like a breath of fresh air.

All words written by Jared Musson, you can find him on Twitter and see more of his work here.