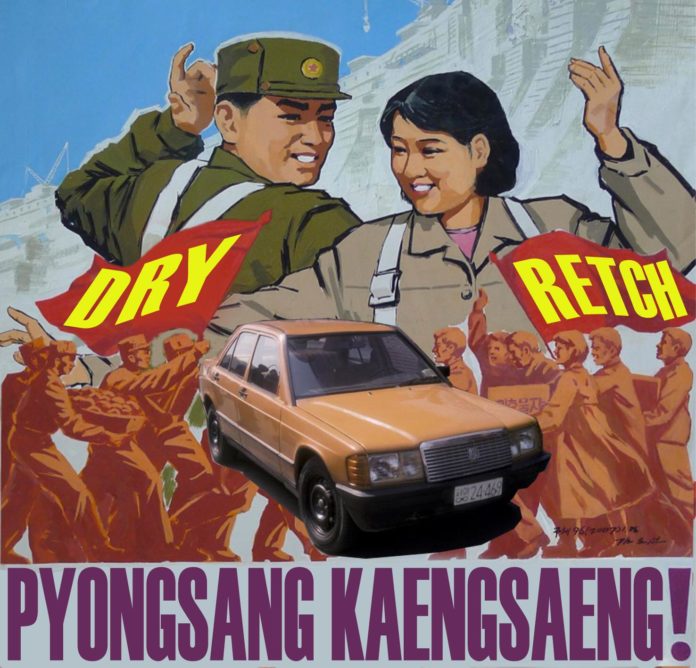 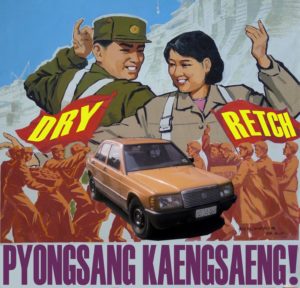 The artwork for this release from the Liverpool/Australian garage punk outfit sees them turn a collective cynical eye away from Stalinist totalitarianism to the North Korean ‘Juche’ theory of centralisation.

The six track EP celebrates the pinnacle of the theory, the less than reliable Kaengsaeng! A vehicle never to be featured on an episode of Top Gear which was manufactured by the Pyongsang Auto Works; essentially it’s a truly crap, dirt cheap poorly made copy of a Mercedes 190E that was only ever available to members of the Kim family… but what does the EP sound like?

Quite simply, this is bloody good!

The entire EP is built around a simple rock n’ roll base – chugging rhythm, simple yet brutally effective slashes of guitar and loose half-arsed sneering vocals, the delivery reminded me of the late great Jeffrey Lee Pierce, it’s a bold comparison but The Dry Retch have a real ‘Sex Beat’ about them; tracks like “Hate The Young”, and “Pray For Rain” trawl the murky highways of rock n’ roll’s past with scuzzy, dirty throbbing bass lines, and vats of echo dipped, reverb laden guitar.

“Insect-O-Cutor (Locked On You)” is a bug eyed, wired, urgent rocker that burns direct into your cerebral cortex, there is a real fire in the vocal delivery ahead of the slower, sludgy “You’re The Reason” which evolves into a pounding, relentless powerhouse.

“Road Rage Suite” with its five separate tracks initially made me think of terrible 70’s prog concept albums; thankfully this is The Dry Retch who continue to ratchet up the garage ante – “Hey Rover” is a blistering high octane scorcher, similarly “Don’t Stop” which rages against people slowing down at green traffic lights, whilst parents parked up outside school gates get a scuzzy kicking during “Make Them All Walk”, then the perennial target – BMW drivers who are accosted during “Die Beamer, Die”.

The EP closes with a cover of the Pere Ubu classic “Final Solution” – an obvious choice for The Dry Retch, a band that have previously paid homage to The Stooges; Pere Ubu themselves being inspired by Iggy and his boys.

The Dry Retch on the evidence here are becoming one of the bands to watch; grab the CD whilst stocks last.