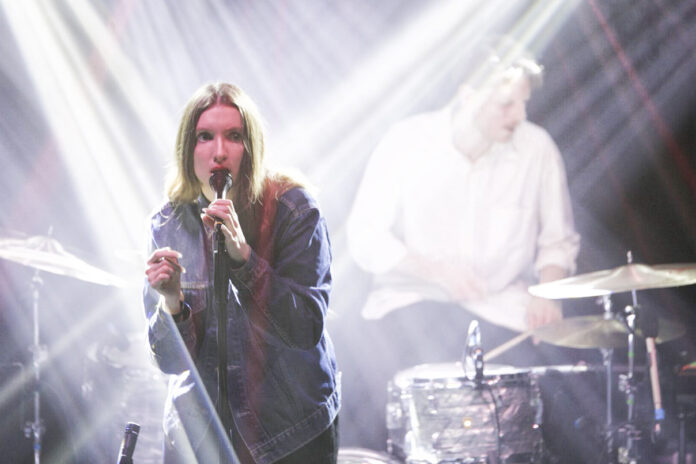 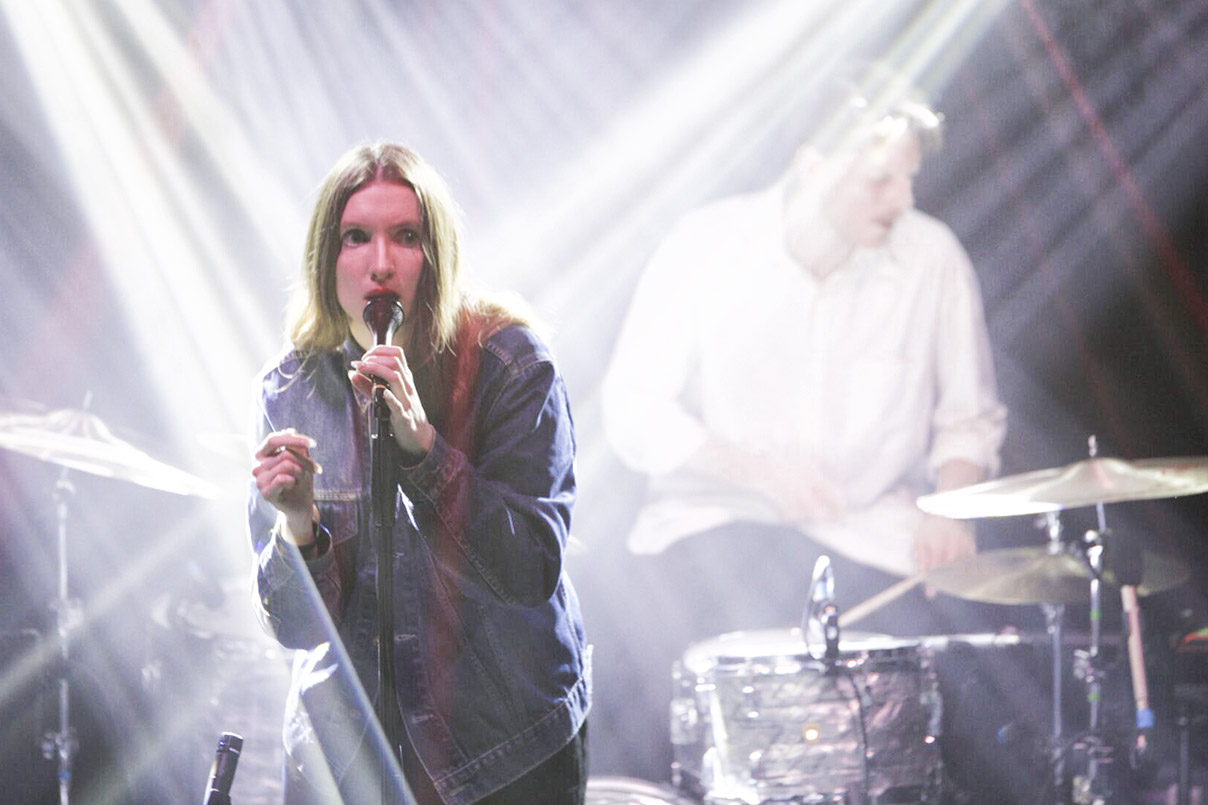 Art-rockers Dry Cleaning offered a beguiling mix of stream of consciousness vocals and occasional wig-outs in what might well be their last gig in a venue this size.

It’s a long way from a slot on Stephen Colbert’s mega-popular chat show on US network TV, to this venerable West Yorkshire venue, but Dry Cleaning’s very particular and beguiling sound works wherever they perform.

Whilst there is no doubt that Florence Shaw’s spoken-word vocals are what makes them distinctive in what has been a bumper year for new bands, it would be a big mistake to see them as a one-woman show. The former visual artist fronted up a very good band as guitarist Tom Dowse flailed away stage left, Lewis Maynard kept it solid with his melodic bass playing and drummer Nick Buxton occasionally went off on a jazz tip as he kept everything in order. 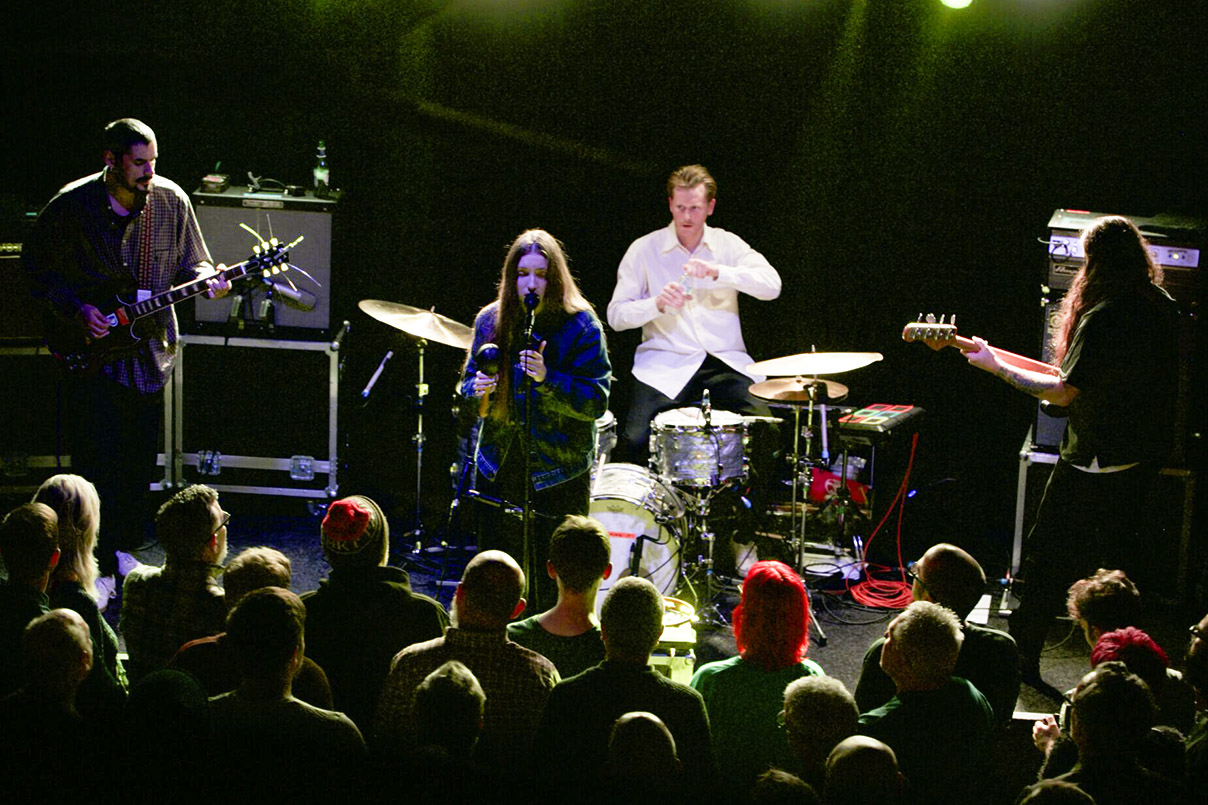 Dry Cleaning didn’t offer much in the way of a stage show here. Shaw did very little apart from some interesting hand gestures, but she was strangely compelling as she drolly intoned her stream of consciousness words, which stretched the concept of lyrics, and might have sprung out of Allan Ginsberg’s gob in another era. Her stage persona was like watching someone who had wandered on stage and suddenly been asked to perform. The often bemused look on her face, as if she’d suddenly thought of the words, was priceless as she raised her eyebrows in consternation and fluttered her hands.

There was a hum in the air, as if the sell-out crowd couldn’t quite believe their luck that they were watching such a hot band in a small venue, and were immediately up for it as the foursome opened up with Sit Down Meal from their Boundary Road Snacks and Drinks EP. It was classic Dry Cleaning, as Shaw pondered a breakup, through spoken trite snippets from greeting cards, as the band pound away from behind her.

It was straight into the punchy, defiant Unsmart Lady as Dowse really opened up. Shaw observed they were due to play here a while ago, so it is to their credit that they honoured that commitment, which will have been appreciated by the venue’s management who managed to survive the pandemic, unlike other venues. 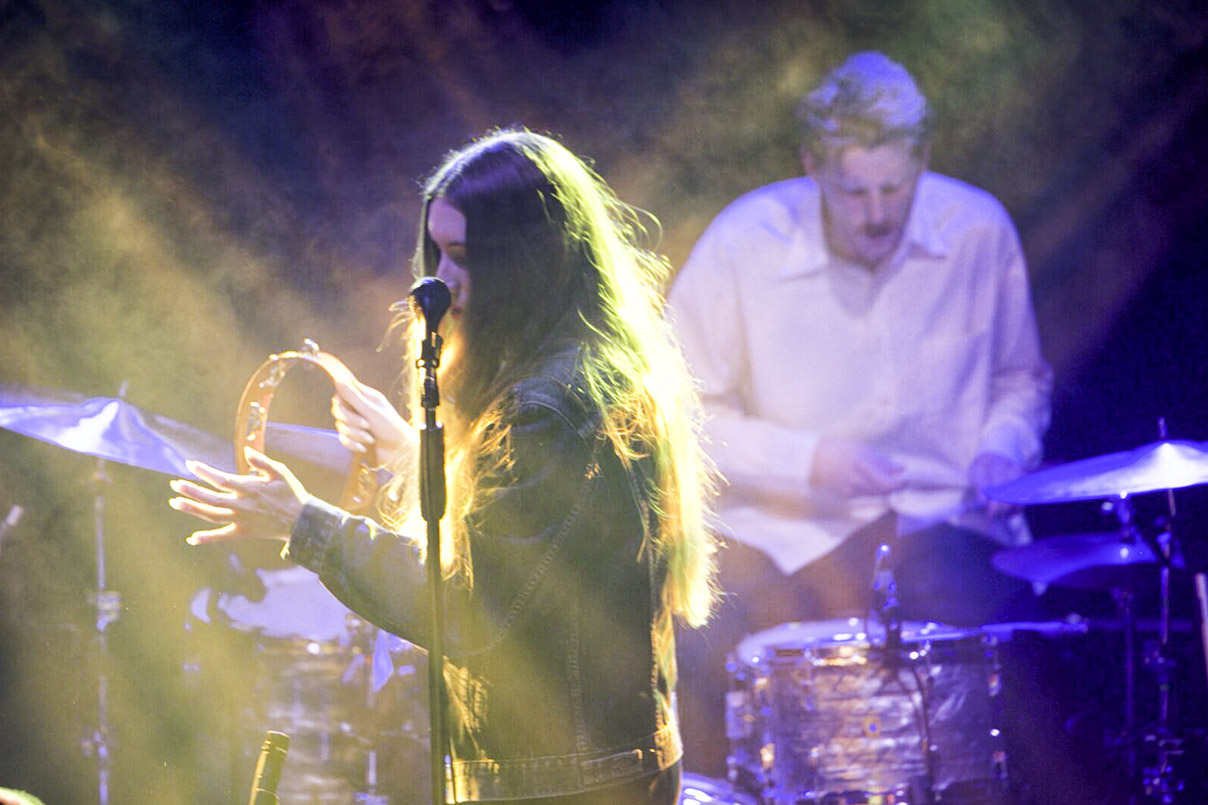 Shaw noted that early single Viking Hair remains one of their favourites, illustrating both the roots of their sound, but also how much they have progressed over the last year or so.

Another early single, Magic of Meghan, was dangerously close to being a pop song, as Shaw mused on the price of fame for the Duchess of Sussex. More Big Birds offers a more mellow version of their sound, and is probably the nearest Shaw got to actually singing, with a lovely Dowse solo thrown in for good measure.

Like Wet Leg in recent days, Dry Cleaning got hot very quickly with a hugely popular single, Scratchcard Lanyard which, as well as making their name, is a template for their sound. To the end, Shaw spoke the words culled from her notes and diaries, which appear to be nonsense but are actually beautiful and droll, as Dowse belted out the catchy riff, Maynard pinned it down and Buxton worked around the rhythm. It was utterly magical and a reminder that doing something unusual can also be hugely popular.

Naturally, this was a set heavy on their debut 4AD album, New Long Leg, but there was enough in a short, sharp but always intelligent set to suggest that album number two will be another belter. The crowd left basking in being in such an intimate space as the next time they see Dry Cleaning it will be in a much larger venue.

Words and photos by Paul Clarke, you can see his author profile here.