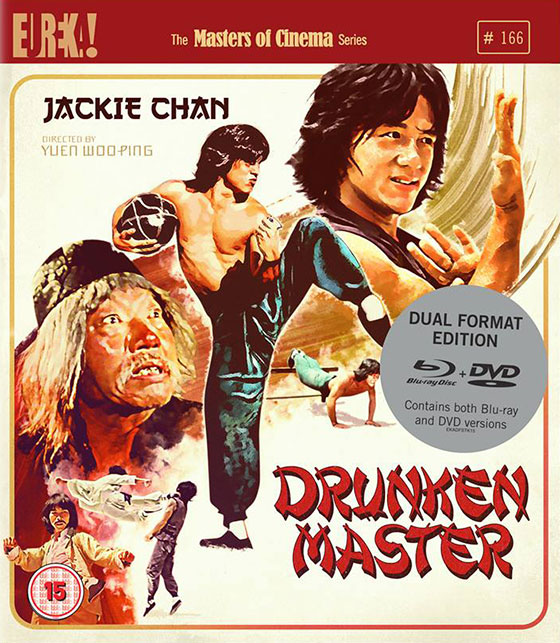 Like many films in a similar vein, Drunken Master focuses on the relationship between an apprentice and master albeit with a twist, the master being a straw haired and red nosed senior citizen who is far too fond of Chinese wine.

The apprentice Wong Fei-hong, aka Naughty Panther, is played by Jackie Chan. He’s a talented fighter though one who requires far stricter self discipline if he is ever to achieve his potential. A prankster who drifts through life never far from mischief, Wong is though highly likeable and has a good heart, for example, when he discovers that a local man has been ripped off by an arrogant businessman he promptly beats up the swindler, whose father then complains to Wong’s own father, Wong Kei-ying (Lam Kau).

This influences Wong Senior’s decision to send his son off to study with Beggar So (Yuen Siu-tien) a man renowned equally for the extremity of his training techniques and his love of liquor.

Little old wine drinking So is a difficult taskmaster and several times a desperately unhappy Wong attempts to escape his clutches. Eventually succeeding, the outside world, though, proves far crueller and the young man suffers humiliation when pitted in a fight against a killer for hire known as Thunderleg (Hwang Jang Lee).

‘You could study all your life and still never beat me,’ Thunderleg taunts him, before making him crawl through his legs and disappear. ‘Killing a nobody like you would only sully my reputation.’

This acts as a catalyst though for Wong to fully devote himself to perfecting his kung fu prowess with the help of Beggar So – which is fortunate as Thunderleg will soon be hired to kill Wong’s father.

Luckily it’s not long before Beggar So teaches the younger man the secrets of the Eight Drunken Gods, a martial arts technique that involves some degree of intoxication. To fight in this way requires equal parts boozed up stagger and martial arts swagger and makes it almost impossible for an opponent to anticipate what is coming next – and usually involves imbibing some alcohol during the course of the rumble.

Yes the plot is predictable and about as substantial as a prawn cracker and the humour is broad (trouser splitting and very bad comedy teeth for starters) but the choreography is truly spectacular and all achieved without the aid of wires or CGI.

While watching Chan, you might one minute think of Buster Keaton, the next of ballet or the golden age of Hollywood musicals – only with kung fu clashes rather than elaborate song and dance routines.

It may not be the greatest martial arts film ever made but it is very possibly the most enjoyable.

The Masters of Cinema Series presents the film on Blu-ray for the first time in the UK in a new Dual-Format edition.

Extras include an audio commentary by Hong Kong film experts Ric Meyers and Jeff Yang, a video interview with Jackie Chan and a special edition booklet featuring new writing on the film and archival imagery.