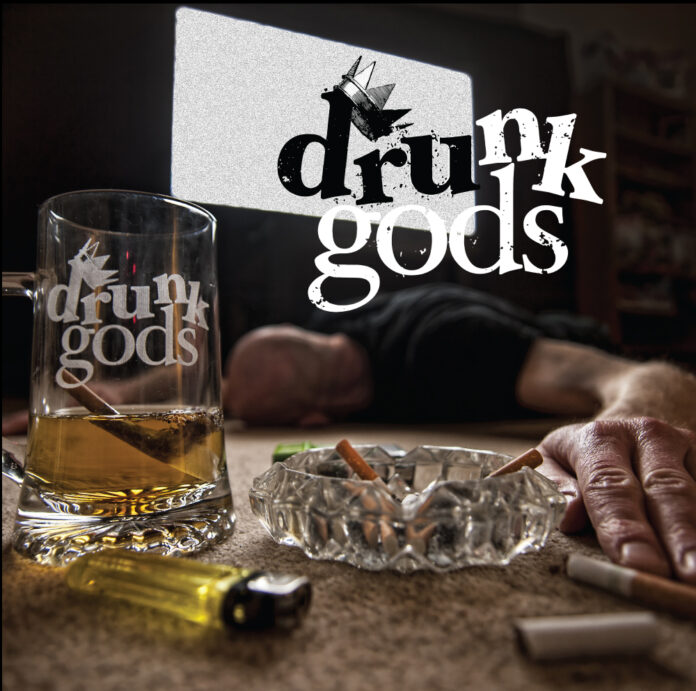 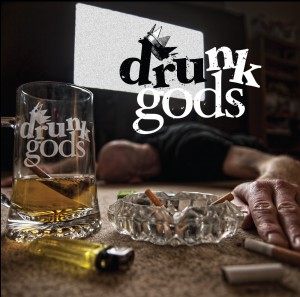 “Gimme back my royal blood and the stars above…what’s ma motivation?”

Drunk Gods is the eponymous debut album from a new Lanarkshire band that formed from the ashes of long-standing Wishaw punk berserker outfit, Gobstopper.  When the rhythm section was rendered missing in action due to work and family commitments, frontman Ewan McGhee forged ahead with his new project, writing, recording and playing all the instruments on this spectacular cluster-bomb of an album.

Clearly a man on a mission, McGhee showcases his considerable song-writing skills on an intense, unrelenting album that eschews trends or any kind of middle ground in favour of an acutely melodic blitzkrieg of dissonant post-industrial punk rock. “Post-Industrial” is a doubly apposite description of Drunk Gods as it reflects not only the Killing Joke, Ministry and Godflesh nuances, but also the topographical and cultural landscape of North Lanarkshire that inspires McGhee’s apparently bleak worldview.

The album was mixed and mastered by Sandy Jones, at Foundry Music Lab in Craigneuk, Lanarkshire. The studio no doubt takes its name from the iconic Ravenscraig steelworks, the loss of which inflicted deep, long-lasting economic and psychological scars on the area. Jones has established himself as a world class engineer/producer on a wide range of releases by local bands, including the astonishing run of albums by the re-activated garage rock legends, The Primevals. His work on Drunk Gods continues to impress, presenting McGhee’s twisted missives with clarity and resonance.

Opening song ‘What’s Ma Motivation’ sets out the stall, abrasive and explosive guitar riffs driving  dark musings on loss of a sense of self, which echo Lou Reed’s blunt post-Electro-Convulsive Therapy statement, “I have no personality”. Halfway through, the song unexpectedly twists into a breakdown/build-up section of Sonic Youth psycho-swirl tremolo-riffing, demonstrating a sure command of dynamics and dropping a hint as to the musical complexities and sophistication which are revealed over the course of this compelling album.

The strongly melodic aspect of McGhee’s songwriting is unveiled on second track ‘Turn Up The Laughter Track’, an epic tune reminiscent of Bob Mould’s Husker Du material. Despite the appealing melodies, this album writhes with frustration, anger and disgust at the human condition and the state of the world.

‘Fuck Buddy (The Heart is Just a Muscle)’ is the centrepiece track, a reductio ad absurdum of the titular concept of sex eviscerated of any romantic component.  Over a lascivious riff worthy of the late, visionary Stooges’ guitarist Ron Asheton, McGhee morphs into a post-punk Alex Harvey, delivering his salty tale with all the bawdy relish of Chaucer’s Miller. The song culminates in a near locked groove of hypno-surrealism, McGhee having extrapolated the subject to its conclusion with no moral judgement proffered or implied. A darkly hilarious track which would make a perfect swan song cover for Iggy Pop; there can be little doubt that the Detroit fire spirit would love this song’s louche swing and provocative subject matter.

One of the joys of Drunk Gods is the free-flowing, earthy poetry of the lyrics, bringing to mind fellow drunk god Charles Bukowski. Atmospherically, it recalls the blasted heaths of Van Graaf Generator circa ‘Godbluff’. ‘Wage Slave’, for example, boasts a rich, almost folky melody and a baritone croon from McGhee, who delivers lines such as “the earth’s already halfway claimed me” with obvious heart-felt sincerity. To characterise the album’s architect as a nihilist, though, would be a gross misrepresentation; its creator is clearly motivated by a deep-rooted desire for something better.

A case in point is ‘People Make Ma Head Hurt’, McGhee’s snappy spin on Jean-Paul Sartre’s famous aphorism, “Hell is other people”. “They hurt my gills, they hurt my fins”, the singer exclaims, neatly conflating Captain Beefheart with Gulliver’s anthropophobic unravelling in the Country of the Houyhnhnms in the final, harrowing quarter of Jonathan Swift’s widely-misunderstood satire on human nature. The fact that the song is catchy enough to be used in a mobile phone advert raises the seemingly improbable but nonetheless tantalising prospect of the Drunk Gods impacting on the mainstream.

Elsewhere, ‘Repossession’ immediately hooks the listener in with a Steve Severin-style bass line as compelling as anything on the mighty ‘Juju’ album by Siouxsie and the Banshees. McGhee sings in his natural Scottish accent, bringing to mind not only the afore-mentioned Alex Harvey, but also Chris Connelly, the exiled Scot who injected an invigorating dose of intelligence and artistry into Ministry’s lyrics circa ‘The Mind Is A Terrible Thing To Taste’. Another intriguing twist appears in the form of a brief Morricone influenced interlude, another example of McGhee’s creative approach to dynamics and structure.

‘The Surfer’ is another potential single, a sly and witty barnstormer which rattles along like the Pixies covering The Beach Boys while McGhee clinically dissects the dehumanising effects of TV news stories. The song also contains the telling line, “there’s a depth to me, more than I’ll let you see”, a clue pointing to the moral heart which beats strongly under the surface layers of ennui and disillusionment.

A subtle Beach Boys’ reference returns on closing track ‘Dirty Honey’, in the form of an almost doo-wop harmony guitar line on the chorus of this dark, brooding ballad with all the menace and prowling bass of The Stranglers at their prime. It’s a lyrically complex song which acknowledges the existential dilemmas driving human behaviour in relationships. McGhee doesn’t offer any solutions, but seeks to get to the heart of the matter.

There’s a galaxy of bands within the contemporary punk/industrial genre striving to master the elusive alchemy which McGhee has perfected with bold aplomb on these 10 tracks. These cannily crafted and well-structured songs bristle with hooks and melodies, suggesting  considerable potential for cross-over to a wider audience. On the basis of this highly impressive debut, the cult of the Drunk Gods looks certain to win new converts. Now is the time to imbibe the holy spirits and evangalise.

Buy the album on Amazon here or on iTunes here.

Drunk Gods now have a rhythm section in place, but need an additional guitarist for gigs, in the West of Scotland initially. If you’re interested, contact Ewan directly through the Drunk Gods Facebook page (above) or by email at drunkgods@outlook.com.