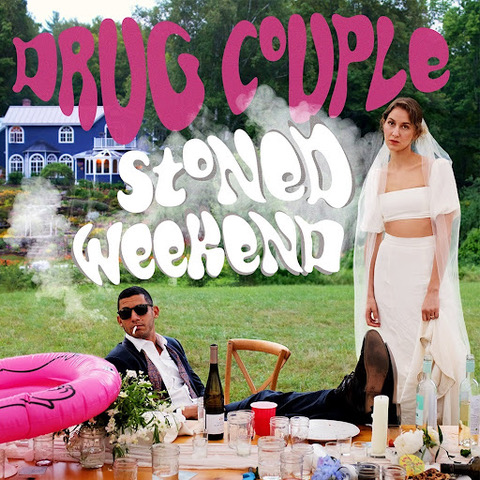 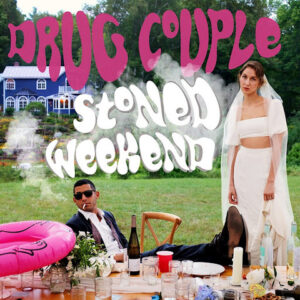 Drug Couple emerge from the hazy, lazy pastures of Vermont with their debut album Stoned Weekend. Ian Corbridge reviews for Louder Than War and finds an album positively dripping and tripping in dreamy laid-back psychedelic grooves, infused with alternative rock and country vibes.

I have always believed that life is what you make of it and that very much depends on the opportunities that arise and how you make things happen. In the case of Miles and Becca Robinson, they had already released one EP, Little Hits, as a band from Brooklyn which had a crazy mix of alternative rock and country and the kind of sound we might have heard if Paul Westerberg had taken over the reins of Sgt. Peppers Lonely Hearts Club Band and given it an alternative country twist. But big city life clearly does not suit us all and this is most certainly the case for this particular Drug Couple.

One day in March 2020, Miles and Becca literally upped sticks to plan their wedding, headed right up to the hills of Vermont, and soon vowed never to return as they quickly found that they were not missing city life at all. So what do you do when you suddenly find yourselves unemployed, in the middle of the woods and with a load of time on your hands? Being based in a two hundred year old barn they decided to build a studio which they called Freelandia, grow some marijuana, draw on their love for country and American indie rock and record themselves a debut album, Stoned Weekend.

With a strong focus on love and hash fuelling an unbridled creative spirit, the creation of this album quickly gathered pace. And whilst their developing sound lends more than a passing nod to the likes of Dinosaur Jr and The Lemonheads, there is much more to get your head around before you reach that inevitable transcendental state.

The first single that emerged from the album, Lemon Trees, really sets the laid back and languid tone of this fine collection of songs, with Miles and Becca trading vocal duties as well as producing some beautiful harmonies as they declare “we don’t have to live around here no more”. With a gently strumming guitar interspersed with a dream-laden pedal-steel it immediately takes you to a land of freedom and no regrets, weaving warm textures and thoughts of hazy, lazy days in the sunshine.

Lemon Trees was written as the Drug Couple were getting serious about leaving the city and starting a whole new chapter in their lives. As they themselves explain “This is a song about the possibility of moving somewhere you can breathe and grow plants on the earth. And maybe you don’t know what you are doing, and maybe those things you try to grow will die, but you can still try. And that by hanging around the city not to miss anything, maybe you’re actually missing out on, like, a whole life”. And this is what underpins the whole narrative and feel of the album, alongside of course some locally sourced refreshment for the mind and soul.

The album opens with the title track which portrays exactly what it says on the tin, with a slow psychedelic beat conveying an overwhelmingly reflective and meditative mood as they “hope this weekend never ends”. The pedal-steel guitar does just enough to keep you in a state of consciousness. In fact, this song is reprised in the closing song Still Stoned which opens with choruses of laughter which tell you all you need to know about the whole recording process and the fact that there is barely a mood shift as the album progresses.

Having said all that, Missed Our Chance ups the tempo slightly but still with a strong hint of Paul Westerberg about it whilst Little Do I Know returns to a slower melancholy feel, driven by the bass and drums before a distorted guitar breaks free. Ben & Bongo is just pure Americana in the finest tradition.

Linda’s Tripp is in nothing less than rock anthem territory, appearing almost like an out of body experience in the midst of the calm surroundings as the fuzzed-up guitar takes centre stage alongside distorted vocals. Our December also rocks out like The Strokes on heat with more distorted guitars before zoning out again in the freaked-out spaces of Wyld Chyld.

As for Blue Water, well just imagine yourself in the midst of the late 60’s at a seedy loft party in Warhol’s downtown New York with the Velvet Underground testing out their latest psych riddled epic on an unsuspecting audience and you won’t be far away from what I’m hearing right now. 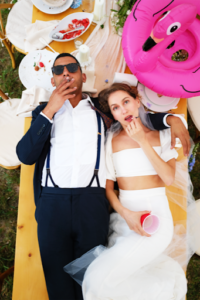 Whilst the majority of the vocals and instrumentation are down to both Miles and Becca, they were also joined by Pastor Greg Faison on drums throughout, together with Danny Meyer on saxophone and piano and Travis Rosenberg on pedal steel. All of this was put together in the Freelandia studio in the wilds of Vermont.

In Stoned Weekend, Drug Couple have totally absorbed the DIY punk ethic and created a unique blend of alternative rock and country with a big slice of psychedelia that is guaranteed to chill the very fabric of your soul until you are horizontal and in a state of dream-like haze. If you need something to take you away from the stresses and strains of everyday life, then look no further.