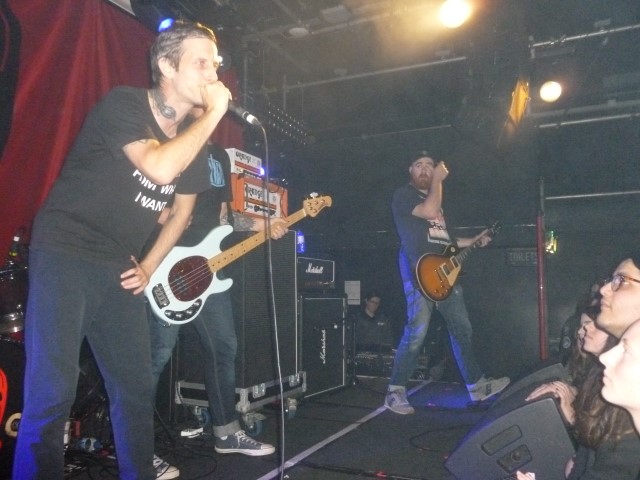 In the rush to genuflect at the altar of Idles and their exhilarating invasion of Holland this week it’s worth remembering the bands that have been making the caustic cathartic for years. With Albany, New York’s Drug Church the splendid moniker more redolent of a Jim Jones school of rock than Bristol’s finest messianic zeal and is the sort of malevolent force that doesn’t foresee things turning out well. See 2013’s ‘Paul Walker’ cover encapsulation of a little boy’s horror at what lies in store.

The boys in the band describe the live experience as something ‘you can pushpit and stagedive to so you can forget for a moment that you have eczema and work at Pizza Hut’. So Pizza is off and the smell of moisturising cream hangs in the air like the Singing Detective on a Saturday night out. Except that playing between Microwave and Wallflower on a value for money bill that is headlined by Boston Manor means they stick out like a particularly sore thumb.

Having to crack on with it for one of those gigs that finishes at ten so they can pack another load in for a club night maybe contributing to them playing faster and sacrificing some of the power. Nevertheless recent single Weed Pin ignites the crowd with the sort of hardcore Nirvana dynamic that Kurt Cobain might have been happier with. That vocalist Patrick Kindlon lyrics are “made to order” in the studio is mighty impressive with the entirely logical scatological breakdown of “Pay shit rates get shit labour” prompting crowd participation and “I should have started a chemical fire” making me wonder who was turning the ovens off tomorrow night.

By now you may have noticed that picking over the bones of a life left over from the meat grinder of work in tragi-comic detail is something of a theme. Kindlon’s sandpaper like rasp perfectly suited to the experience of revealing a disingenuous modesty about the bands true worth. Tonight his wiry frame exploding with an agitation and an impressive fleet of foot as he negotiates his way across the narrow strip of available space on the front of the stage.

Pledging to cut your hands off to avoid work would have played havoc with his Marcel Marceau on speed presentation of a blistering Work-Shy. A pre gig commitment to stage diving if this one was played giving way to some rather pathetic mirroring gestures on my part. Even with the ‘Take Marx and Engels, they aren’t the sort of people who can sell me an ethos’ lines being delivered just around the corner from where they hung out adding an extra layer of spice.

He is also blessed with what we might call the gift of the gab as knowingly calling us ‘Guvnor’ before enquiring about local colloquialisms meant being rewarded by getting told its ‘Wanker’ in Manchester. Throughout the show a smirk which conveys a certain bemusement with the human race makes me imagine he appreciates us being here but somehow suggests he doesn’t really want to be friends and start a group therapy session after the show. None of which is exactly new but seems more invigorating in an age of responsible rock with a redemptive twist. 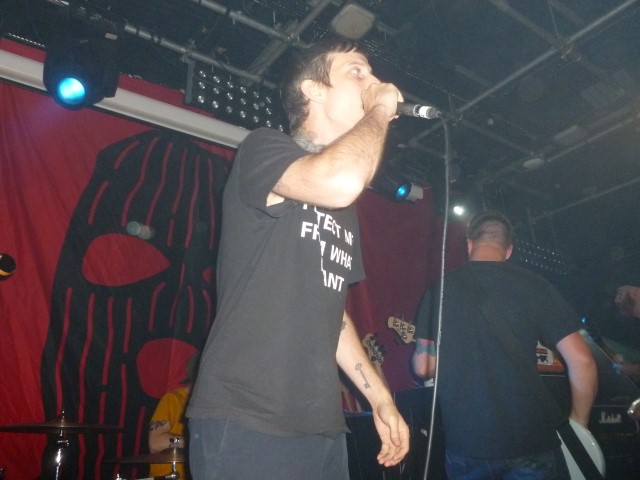 During But Does It Work? the only thing that does is the song. A list of relationship permutations and failures unravelling as the song uncoils itself into a chorus of some magnitude. Some of the songs follow a similar trajectory but when the crunch of a riff feels like being run over it is worth putting on repeat. Particularly when a Nick Cogan Pixies style guitar line cuts through to have the whole thing ride in on a wave of melody to illustrate that classic alternative rock influence again.

The band might have no goals but while tunes from the forthcoming album like Strong References might not make them the next big thing it should at least get them further up the line-up. Even Avoidarama which seemed to be about suicide came sporting enough accessibility and backing vocals to sing in the bath.

A particular favourite from the criminally overlooked debut album is the Attending a Cousin’s Birthday Party and its ‘List of places I’d rather be’ kiss off that that should mentally soundtrack your next family function and beyond. So abandon all hope, ye who enter here? Quite the opposite as for a short period tonight there was nowhere better to be as they more than delivered on their scabrous mission statement and November’s Cheer seems all set to do Dante with less letters. That my friends is punk rock and you should welcome Drug Church into your life.