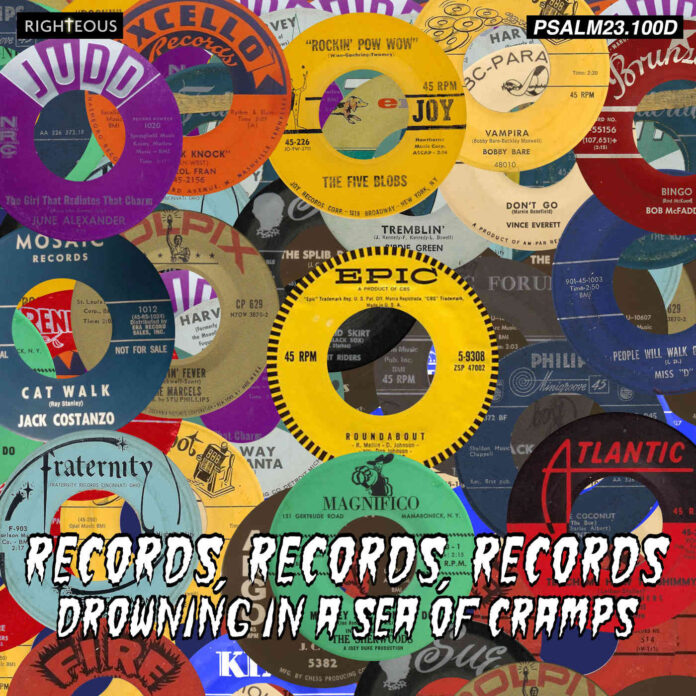 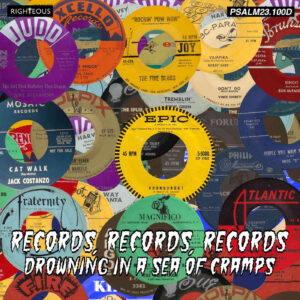 Following the release of The Cramps second single ‘Human Fly / Domino’ in 1978, frontman Lux Interior was quoted as stating “I think it would be great if we were considered the band that made people pay attention to the past again“.

Now some 11 years following Lux’s untimely passing, it is clear that his aim has partially become his legacy. An entire industry has sprung up loosely linked to the legendary record collection curated over 40 years by both Lux and life partner Poison Ivy; from the ‘Born Bad’ vinyl compilations, the ‘Songs The Cramps Taught Us’ variants, through to the ‘Beat From Badsville’ collections on the Stag-O-Lee label, to an array of similar releases courtesy of Cherry Red Records imprint Righteous Psalms. The Cramps have been responsible for shining a light on some of the most obscure 45’s, introducing people to weirdest of novelty singles, wild dance crazes, spoken word craziness colliding with hot rod madness, and some truly warped instrumentals.

“Records, Records, Records” presents another 52 of such gems; spread across 2 CD’s housed in a jewel case with sleeve notes written by Dave Henderson (MOJO), the entire collection being remastered from the original sound source.

Opening with the sax torched sleaze of Johnny Moore & His New Blazers ‘Bullfrog’ originally the B-side of their 1959 take on ‘San Antonio Rose’ (a decent copy of would set you back around £50) which The Texas Playboys first released some 6 years earlier, sticking with nature theme we get ‘Wooden Bird Twist’ from the Buddy Vincent Orchestra, a frenetic sax heavy instrumental complete with warped cuckoo noises that came out via United Artists (USA) – no-one seems to know the date of release, such care on behalf of the label may explain why it was Mr Vincent’s sole release. 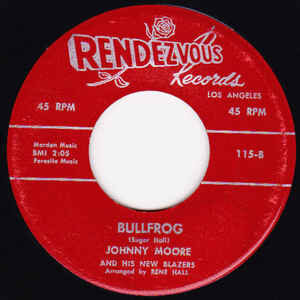 Another artist with just a sole release to their (wonderful) name is Steve King & The Echelons here with ‘Satan Is Her Name’ the flip of ‘Long Lonely Road’ – as odd as it sounds this actually reminds me of Space ‘Female Of The Species’ albeit with the breathy “ahh lover” from the temptress in question.

Jack Hammer (born Earl Solomon Burroughs) doesn’t live up to the potential of his non de plume, instead delivering a smoky jazz ‘Concrete Desert’ – that said he co-wrote ‘Great Balls Of Fire’ so he can be forgiven for pretty much anything! Don Sargent And The Buddies brought the bongo’s along to the 1959 recording of ‘Voodoo Kiss’ complete with Don’s pleading vocal courtesy of the equally obscure Hollywood based Catalina Records which was owned by former one-stop shop owner turned writer and label bass Dan Shea, together with co-author and co-owner Jack Bowman.

The Vibes ‘Pretty Baby (I Saw You Last Night)’ is an incendiary gem, originally released on the Perspective Sound label in 1958, fronted by Ronnie Franklin (AKA David Gates who later formed Bread), the production is dire, but his one hammers along, no doubt assisted by the chugga chugga loco percussion.

And then we come to Dr. Horse with his ‘Jack, That Cat Was Clean’ a doped down blues infused semi spoken word corker that glorifies a ‘cat’ about town complete with “silk slacks that cost him seven bills” – though this pales in comparison to the demented novelty of Bob McFadden’s ‘Bingo’ where he calls the numbers on the B-side of ‘Shake, Rattle And Roll’ which you look to shell out around £40 to get an original Brunswick label copy of. The Sherwoods ‘Monkey See, Monkey Do’ is a distortion heavy belter complete with (perhaps) a kazoo.

No self-respecting Cramps themed compilation would be without a couple of dance novelty tracks; we get The Marcels ‘Twistin’ Fever’ followed by The Isley Brothers 1961 Ohio region hit ‘Teach Me How To Shimmy’ which gets all sensual yet still retains the brothers gospel roots. It’s good to hear Donna Dee ‘Nobody’s Gonna Hurt You’, the flipside of her 1961 Counsel Records ‘Television’ single; written by Eddie Cooley who passed away in April 2020 this one has a real ‘Fever’ vibe to it, from the pace and instrumentation. Dee had a great voice that sadly wasn’t captured often enough.

Glen Goza’ ‘Goshamody Whatabody’ should be familiar to anyone interested in the collection, it’s been featured on both the ‘Desperate Rock N Roll!’, and ‘Rockabilly Rarities’ series. Glen fronted the Damangos, though confusingly they were also fronted by Rohny Lofton; either way this is pure rockabilly belter, complete with hiccupped vocals, pitched yelps all over a rollicking utterly non-PC tale of romance, or at least desire, but as Lux regularly reminded us; the best rock n’ roll was about sex!

Glen continued to record into the 80’s – have a lookout for ‘Heaven Needed a Champion’ a bizarre tribute from 1984 to David Von Erich, a Texas wrestler on the verge of the big time who died whilst on tour in Japan.

Another rockabilly gem is ‎’Hot Rod Boogie’ courtesy of Jack Kitchen & The Rock-A-Billies – this one came out via DJT Music though the release date wasn’t listed on the single and has been lost in history; structurally similar to ‘Johnny B Goode’ and dramatically different to Disc 1 closer ‘Valley Of Tears’ from Bobby Rebel who despite the great name only managed this one release which was coupled with ‘Teardrops From My Eyes’ – maybe it was the one trick pony theme that failed to make this heart wrenching sizzler a breakout hit.

Skip Cole & His Hi-Spots open Disc 2 with the instructive ‘Do The Whip’ as Suave Records attempted to bring yet another new dance craze to market, before we veer off into a slew of instrumentals including the guitar picking of The Jaguars ‘Roundabout’ complete with some sultry sax honking, the whole piece gaining dark tension vibe, whilst Les Elgart gets suitably steamy with ‘Voodoo Drums’ though seeing images of Les clutching his trumpet it’s hard to believe he could of dreamt up such exotica!

We then return to novelty trash, this time it’s the regular examination of the primate kingdom as we get The Go-Rillas ‘(I Go) ‘King Kong’ which was actually comedian Soupy Sales in disguise. Sales real name being Milton Supman, he recorded from 1950 and took on Christmas, Frankenstein, Elves and even covered ‘Speedy Gonzales’ in the mid-60’s, however he took on a doo-wop angle for this slow burner with some neat backing vocals, ahead of a selection of ape like noises.

Big Daddy And His Boys (care required if searching for him on Google!) offer a faithful cover of Andre Williams 1956 hit ‘Bacon Fat’ – which as you will be aware was a regular in The Cramps live set right up to the late 80’s. They never formally recorded and released the track, a live version taking up the B-side on the ‘You’ll Never Change Me’ 7” bootleg crept out of Sweden in 2014 having been recorded live at The Peppermint Lounge some 12+ months on from the ‘Smell Of Female’ live set.

El Pauling And The Royalton offer some impassioned marital advice over a solid soul tinged R & B during ‘Now Baby Don’t Do It’ which came courtesy of the Ohio based Federal label in 1960. Philadelphia was the home of Sunnybrook Records who in 1962 put of The Four Sportsmen’ second release and provided this compilation with its title; it’s a well-produced doo wop ride, strapped to a solid rock n’ roll beat, also worth digging out is their ‘Jelly Roll Brown’ – surely the title of which has a link to ‘Jelly Roll Rock’ which was released some 3 years earlier; this again being faithfully covered by The Cramps. 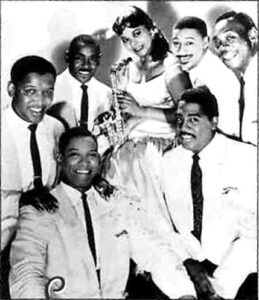 ‘Pretty Plaid Skirt (And Long Black Sox)’ by The Night Riders is the source of The Cramps ‘Cornfed Dames’ and will be familiar to anyone with a copy of ‘Born Bad. Volume 6’, originally released via Sue Records in 1959 – a decent original copy of which will set you back a minimum of £150!

Johnny Gentle ‘Milk From The Coconut’ was a Phillips Records attempt at cashing in on the teen dream-boy pop in 1959, Gentle AKA both John Askew, and Darren Young was a handsome lad who hailed from Liverpool and at one point toured Scotland with The Silver Beetles. Gentle later moved to Jersey, where he worked as a joiner, before settling in Kent, and has made appearances at Beatles fan conventions. In 1998 he co-wrote a book, ‘Johnny Gentle & the Beatles: First Ever Tour’

The unfortunately named The Five Blobs offer up ‘Rockin Pow Wow’, this was the B-Side to ‘From The Top Of Your Guggle (To The Bottom Of Your Zooch’ – I’m not kidding, that was the title of this studio band, the lead vocals being over dubbed during a different recording session; it’s a bizarre vocal harmony novelty record that I guess looked to sound in some way like a (as then described) Red Indian camp fire.

Max Falcon was a Canadian rockabilly singer, his debut 7” ‘Money Back Guarantee’ providing a hit for Barry Records in 1962, this resulting in Falcon joining the house band at The Peppermint Lounge, same title but sadly not the same location as The Cramps regularly played at.

The vocal delivery from Bob Lee on the deranged ‘Wanted For Questioning’ is worth the admission fee alone, sadly this seems to be Bob’s sole release having been released by Dot Records in 1957, gravelled vocals over a three note stabbing piano, and brushed skins – that said to get hold of an original would like many others here cost you upwards of £60.
Stand by for ‘Hot Rod Queen’ from Roy Tann which starts off all softened rock n’ roll, and then is rudely interrupted by the sound of dragsters revving , screeching rubber and what sounds like the engineer arsing about with an elastic band – did Roy ever get to hear the final mix ahead of release, listening to this I’d hazard not.

And then we come to Mad Man Jones ‘Snake Charmer’ – a genuinely unsettling car crash of rumba beats, some sort of attempt at African rhythms and an off-kilter vocal that was someone’s idea of sounding like a python.

We finish with another novelty release from Dot Records, this one featured Walter Brennan introducing us to ‘Space Mice’ (of course he is!!) courtesy of a lisped vocal over the soundtrack to a crap version of The Jetsons, bizarrely Brennan went onto release at least a dozen albums, and appeared in such films as My Darling Clementine (1946), Red River (1948), Rio Bravo (1959), and How the West Was Won (1962). He won the Academy Award for Best Supporting Actor for his performances in Come and Get It (1936), Kentucky (1938), and The Westerner (1940), making him one of only three male actors to win three Academy Awards. He didn’t win any awards for his musical efforts!

Another excellent collection of truly insane recordings, that can only leave you wondering quite what the artists and labels were actually smoking!