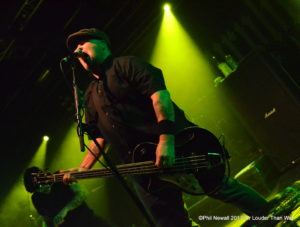 A mere five UK dates including an appearance on The Other Stage at Glastonbury ensured that this tour to promote the current ‘11 Short Stories of Pain and Glory’ album was going to busy; Liverpool stepped up to the mark – no doubt keen to hear Boston’s finest covering the LFC adopted anthem ‘You’ll Never Walk Alone’ in its rightful home…

By the time the lights dip and the familiar entrance theme of ‘The Foggy Dew’ rings out the temperature in the Academy has redlined; there is sweat rolling down the building walls yet the packed front rows are already forming circle pits, roared on by the gravelled hollers of “Let’s Go Murphys”…the stage is washed in blue light, from the right the band bound out and immediately launch into ‘The Lonesome Boatman’ the opening track from ’11 Short Stories…’ – the venue ignites, bodies slamming into one and other, arms raised punching the molten air…Ken Casey pauses long enough to tell us to ‘Hang ‘Em High’ before an (as ever) capped Al Barr pinballs the stage; within moments he has clambered from the stage and is stood on the barriers, face to face with a seething mass, behind him James Lynch soundtracks the American Revolution, thankfully the paces dips momentarily for ‘Blood’ – the stage, appropriately swathed in deep red light, the track again from the current album which I considered to be a triumph, a genuine resurgence; live however ‘Blood’ takes on a life of its own, this is where Dropkick Murphys excel, they connect with their audience, despite the continental divide they identify with their audience who respond in turn, Ken Casey can barely hear himself above the massed voices before him

‘I Had A Hat’ demonstrates that despite many of the bands more anguished lyrics they really know how to party; Casey and Barr’s duelling vocals, Tim Brennan on guitar propels the entire sound, Matt Kelly anchors things perfectly; everything else just seems to fall into place; the sound is energetic yet tight; we get ‘Prisoners Song’ and ‘The Boys Are Back’ from the 2013 ‘Signed & Sealed in Blood’ album, by now the whirlwind of stripped to the waist crowd surfers heading over the barrier has caused the security staff to call for back up – the band did little to quell the excitement blasting through ‘Going Out In Style’ the jaunty ‘Rose Tattoo’ and then leading us into their spine tingling rendition of ‘The Fields of Athenry’, the set effortlessly mapped the bands 21yr career; at one point Ken Casey paused and reflected on those earliest of days, lamenting how they just don’t get the chance to play tracks from ‘Do Or Die’ and ‘The Gangs All Here’ – he instantly rectified this by launching into a medley of ‘Never Alone’, ‘Boys On The Dock’ and the aforementioned ‘Do Or Die’ during which Al Barr encouraged the audience into a maelstrom circle pit. 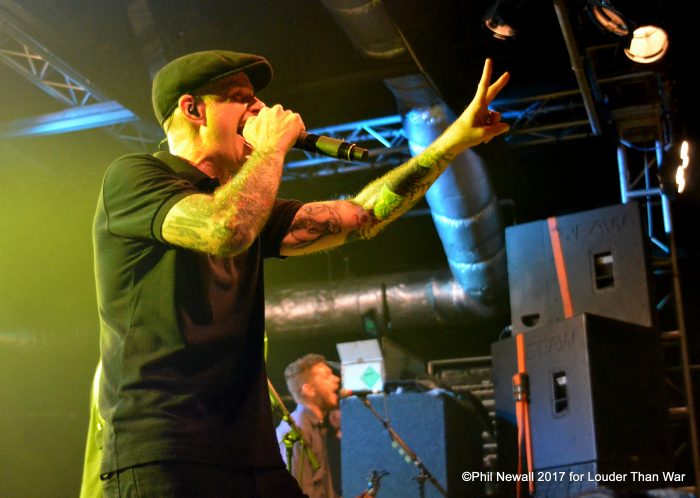 ‘You’ll Never Walk Alone’ is perhaps my least favourite track of all time; I am from Liverpool, I still live here – maybe it’s over exposure, you can’t shop in town without hearing some addled busker in his efforts to hijack a Japanese tourist out of 50p…but somehow Dropkick Murphys have made it not just palatable, but their own; the key is their motivation, they have understood and identified with the lyric, similarly as they time hopped back to 2003’s ‘Blackout’ album for a roustabout ‘Workers Song’

As the energy continued to build we got a cover of Sham 69’s ‘The Kids Are United’ which concluded with the crowd chanting the lyric back drowning out the familiar banjo refrain of the defining ‘Shipping Up To Boston’ as the tracks explodes huge segments of the crowd are mounting the barriers, hauling themselves on stage, this is the Dropkick Murphys party and all are invited; it got a tad cheesy with closer ‘Until The Next Time’ – arms around the shoulders sing-a-long, but when a set has been this good, you can forgive fiends!