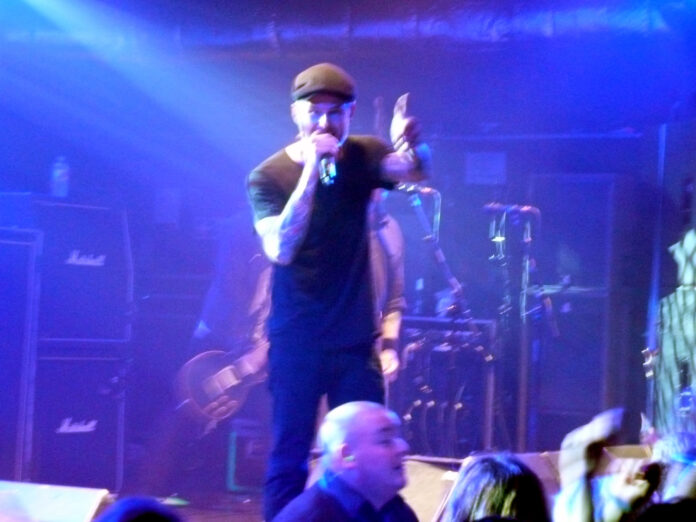 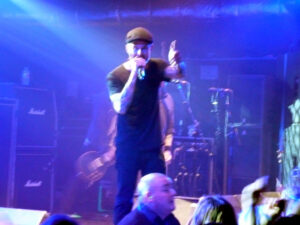 Boston’s Dropkick Murphys rolled into a Liverpool gripped by an icy wind, a wind rolling in from the Western Ocean, the ocean that the bands forefathers travelled across a few generations back. Like Boston, Liverpool has a large Irish community a fact not lost on Ken Casey, who then pointed out the cities further links; Boston’s ice hockey team The Bruins and Liverpool FC are owned by the same family ”â€œ a link not particularly welcomed by the sell-out Academy crowd, but that’s another issue”Â¦

The Dropkick Murphys have over the years very successfully forged a career that now sees them travel the globe playing their particular blend of Celtic tinged street punk to sell out crowds ”â€œ Liverpool was no different; the crowd fuelled by the outrageously expensive lager encouraging the band to the stage with repeated chants of “Lets go Murphys”Â
As the lights dimmed and the bands somewhat haunting entrance music began, the expectant crowd had already whipped themselves into a frenzy ”â€œ people were already crowd-surfing!! The band, bar Casey and front-man Al Barr stepped out onto the stage to be greeted by an almighty roar as Scruffy Wallace answered the call with the opening peel of the pipes; the crowd literally exploded, immediately stage front a huge mosh pit materialised and the space above ”â€œ well it looked like rain such was the quantity of liquid thrown skywards, as the first crack of the drum landed in sequence with a burst of white light the full expanse of the stage was exposed as a curtain disappeared to reveal drummer Matt Kelly flanked by Barr and Casey.

Al Barr moves like a middle weight bare knuckle fighter, literally pouncing around the stage, Casey with guitar strapped his foil ”â€œ the remainder pinball about, pausing stage front to encourage the masses arms held high. Its loud, its proud ”â€œ the Murphy’s sing of social injustice, the rights of the working man, and mixed amongst this they include historical reference points; as such the seething cauldron beneath them instantly connect.

As a visual spectacle they are without challenge, in the past they have been criticised; certainly in the live arena for producing an amplified noise ”â€œ however tonight they are quite simply faultless, every instrument from the meekest tin whistle, delicate banjo, mandolin and through to Casey’s bottom scraping bass can be heard clearly, which demonstrates that behind the noise, when you strip away the energy there are well constructed songs at the core of this band. The Murphy’s are without doubt one of the tightest outfits around, multi instrumentalist Jeff DaRosa juggling with a selection of strings, harmonica yet never once pausing for breath, the almost call / response vocal dexterity of Barr and Casey, quite simply ”â€œ stunning.

Thankfully they (briefly) slowed things down; four stools being brought on stage to allow for a selection of acoustic tracks played Irish pub style, including ”ËœBoys On The Docks’ which Casey dedicated to his grandfather ”â€œ before once more launching themselves into the firestorm they had started. I did try to make notes, to record the set list ”â€œ my paper literally disintegrated due to a blend of the volcanic heat, and the liquid flying through the air ”â€œ by now the walls were quite literally running. The set was a blend of the old, drawing from (pre-Al Barr) ”ËœDo Or Die’ to ”ËœGoing Out in Style’ visiting all points in-between including rabble rousing anthems ”ËœWorkers Song’ ”ËœThe State Of Massachusetts’, ”ËœJohnny, I Hardly Knew Ya’ – had everyone wailing “Har-oo, Har-oo!”, ”ËœCitizen CIA’, ”ËœTessie’ and my own favourites the magnificent, and seldom played live ”ËœFields Of Athenry’ which Casey dedicated to the people of Liverpool, promising to visit here more often which was followed by ‘Broken Hymns’ a brooding lament to the dead of the American Civil War. 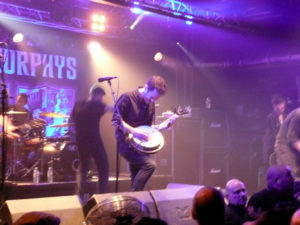 The bouncers ”â€œ all credit to them; no doubt one of their physically most challenging gigs as volley after volley of crowd-surfer were carried over the stage barrier ”â€œ remained in good spirit throughout, but were no doubt delighted when after a full hour and a half the band left the stage.

Fools! Minutes later after another chorus of “Lets go Murphys”Â we were treated to ”ËœKiss Me I’m Shitfaced’ when the band were joined on stage by at least 40 weary and bedraggled ladies, we closed with ”ËœSkinhead on the MBTA’ the energy ramped to boiling point”â€œ the Murphy’s ready to continue their journey, but still referencing the past.

Completely compelling ”â€œ one of the most energetic, enthusiastic, and down-right entertaining gigs I have seen in a long while ”â€œ a glorious, noisy adrenalin fuelled chaos, but a chaos that includes every person present, there is no division between band and audience, all striving for the same euphoric moment, and that’s the key to The Dropkick Murphy’s success.