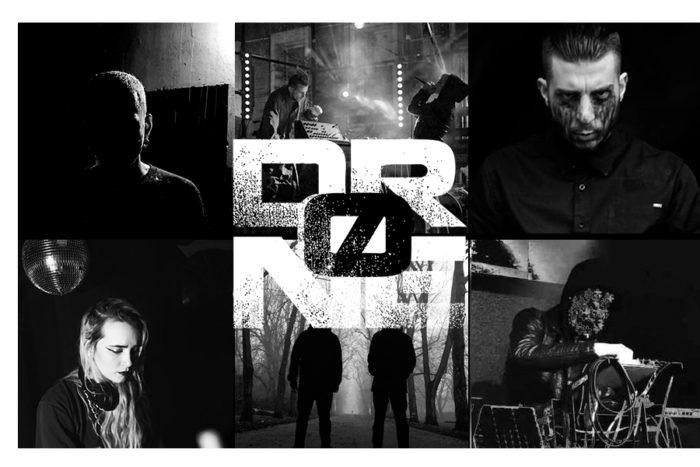 I’m often unfamiliar with many of the artists that perform at Drøne nights but always leave with a handful of darkwave dirge to delve into. The last Drøne night at The White Hotel introduced me to both Test Dept and Imperial Black Unit, so there is always some knowledge to bring back.

I arrive just after 23:00 to an almost bare but smoky room. On the stage is Glaswegian Pull Rank, wearing a mask made up of two-bar crosses. The set had its moments, with many of the EBM instrumentals sounding great, but there are times when the vocal felt awkward. However, after listening to his late-2018 EP, Relic, he did recreate the sound fairly well, so I can’t fault the talent of the artist.

Next up at around 23:45, taking us into the early hours of Saturday morning, we have Synthicide’s, Andi Harriman. Synthicide is a regular dance party from New York, who specialises in all forms of electronic music. Harriman’s set was phenomenal, from start to finish. She played an eclectic set filled with dark techno, industrial and an occasional flirt of Italo-disco. As the night got later, the crowd got bigger and Harriman had everyone dancing.

By the time we hit 02:00 a.m., we are only just hitting the mid-point of the night. At this point, the smoke machine is still pumping with regularity and it’s almost impossible to see the stage, even from a few feet away. However, the head of a bass guitar creeps it’s way into my eyesight as non-stop noise fills the room. This is Verset Zero. The Frenchman’s Manchester debut still rings in my ears the morning after. The set moves from harsh noise to dark ambient with occasional EBM rhythm breaks its way into the atmosphere keeping the flow of the moving.

Up next is German duo, Operant. The group is made up of Instruments of Discipline founder Luna Vassarotti and August Skipper. Instruments of Discipline is the Berlin-based record label, which focuses more on the curated aesthetic rather than genre. Vassarotti is forward thinking, and her group Operant very much relies on a powerful performance. Their set is made up of distorted vocals, power tools and pieces of metal, creating a true industrial sound for the true industrial landscape.

After Operant’s performance, my body can take no more, and so I end up missing the final DJ sets by Inhalt Der Nacht and Manchester-based duo, Kander. Drøne offers a night like no other. A gothic nightmare. A bad trip. A redemptive and sleep-deprived hangover.

Pull Rank can be found on Facebook and Bandcamp.

Andi Harriman can be found on Facebook and on Bandcamp as Synthicide.

Verset Zero can be found on Facebook and Bandcamp.

Image courtesy of Drøne. More Drøne events can be found on Facebook.