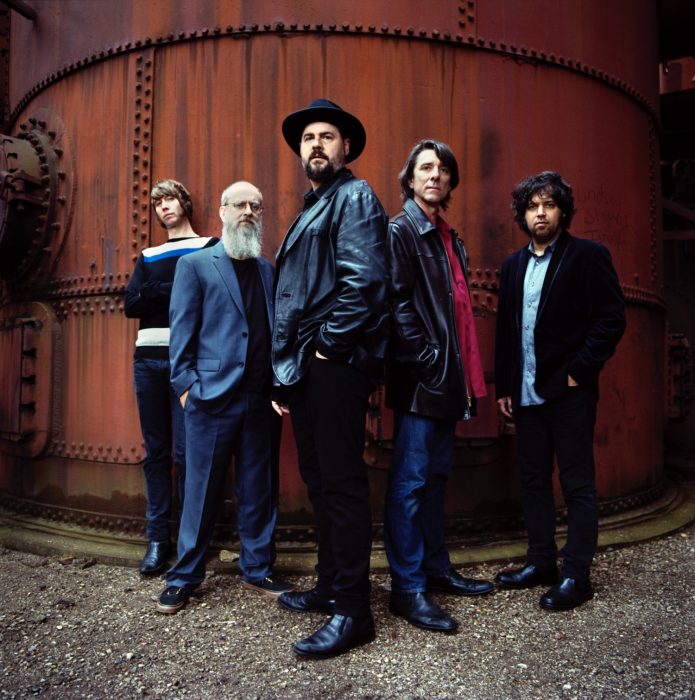 2016 marks the 20th year of Drive-By Truckers’ existence, and the emergence of a career-defining new record, American Band. Lyrically fiery, it arrives at a time when, to say the very least, the world needs artists who are aware of and engaged with the political climate. Tom Clayton finds Patterson Hood in fine form and ready – as ever – to take on the establishment. It’s a Southern thing…

Many UK-based Drive-By Truckers fans will be able to pinpoint the first time they heard a song by them. In 2004, a well-known music magazine included ‘Goddamn Lonely Love’ on their monthly free CD. The song, from DBT’s fifth album The Dirty South, marked the emergence into the mainstream of a band that sounded both like they came from another time, but had also arrived at exactly the right time to get swept along with the alt-country movement that was still going strong (DBT were never properly ‘alt-country’, but that’s another debate for another time).

That song sent new fans scurrying back through the band’s discography – and what treats lay in store there. In particular 2001’s Southern Rock Opera, now deemed so influential it is listed in Robert Dimery’s book 1000 Albums You Must Hear Before You Die, was a concept album about Southern Rock in all of its sprawling glory. It presented a unique, endlessly complex vision of the South, intended to bust open people’s perceptions of the region. Also it kicked all kinds of ass, which helped.

Since then, led by the irascible Patterson Hood, DBT have pulled off the rare trick of attracting both critical acclaim for each new record, and building a genuine connection with fans from around the world – largely thanks to their titanic touring schedule. When I ask Hood for his advice to bands starting out, he in fact sums up his own band’s ethic: “Be strong, steadfast and true to your own beliefs and mission. Show up on time and play every show like it’s your last. Don’t screw up but don’t be afraid to take chances.”

2016 marks the 20th year of Drive-By Truckers’ existence, and the emergence of a career-defining new record, American Band. Lyrically fiery and direct, it arrives at a time when, to say the very least, the world needs artists who are aware of and engaged with the political climate. In an era of ‘post-truth’ politics, and in the run-up to a potentially world-changing US election, do the band feel a more acute need to convey their message? Hood says, “We’ve always identified with those marginalised in our society… We are living in historic times – there is a lot riding on the outcome [of the election] and we feel compelled to play the songs we’ve written about it all. We write what we feel, always have, and we feel very strongly about what we are saying.”

However, American Band also provides glimpse of the more personal, wounded side to Hood’s songwriting – a seam he has often returned to, but one which always produces compelling results. Album closer ‘Baggage’ was written in the wake of Robin Williams’ death in 2014. “It was very sad – it prompted me to reflect on some of my own battles with depression.” Did the writing of ‘Baggage’ provide any solace? “The writing does help… it always has, I guess that’s why I started in the first place.”

The band are on a typically mammoth tour which takes them through until nearly the end of 2016. I ask Hood which venues he is most looking forward to playing. Unsurprisingly, it’s an iconic venue that tops the list. “We always love playing The Fillmore in San Francisco. I’m also very excited to be playing two nights in my new adopted hometown Portland Oregon on the night of our new album’s release.”

One gets the feeling that even if Drive-By Truckers weren’t playing packed houses every night, they would still be playing somewhere, dutifully chronicling the other America that is increasingly being forgotten, blown away by the bluster of anti-immigrant, anti-conversation rhetoric.

American Band arrivees with the following message from Hood, which serves as a fine summation of their standpoint: “America is and always has been a land of immigrants and ideals. Ideals that we have often fallen short of achieving, but it’s the striving that has given us whatever claims to greatness we have had. That’s what America means to us. And we’re an American band.”

Hood and his compatriots aren’t trying to make America great again, at least not ‘great’ in the way that Trump and his skewed vision would like. They know that America’s grand ideals are only achievable through community, co-operation, and bloody hard work. And they won’t be stopping any time soon.

All words by Tom Clayton | @TomClayton3