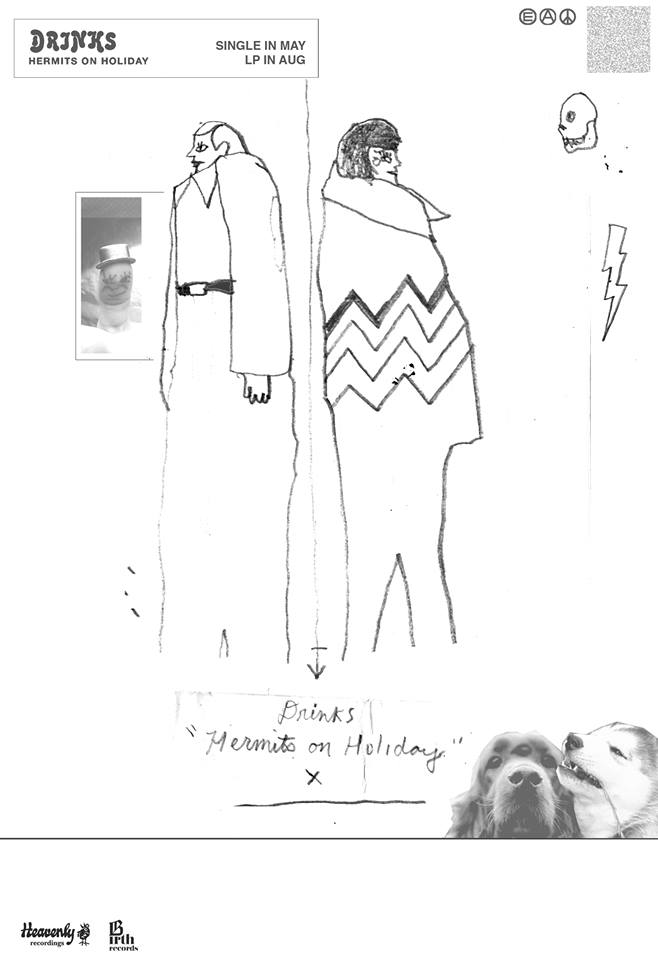 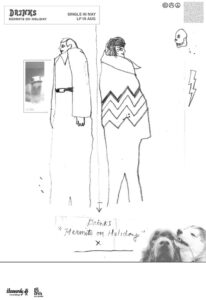 Louder Than War’s Clive K Hammond takes a look at the twisted outcome of a Cate Le Bon and Tim Presley collaboration entitled Drinks. The debut ‘Hermits On Holiday’ is as bizarre as expected.

Drinks – the self-confessed ‘solo’ project from maverick marvels Cate Le Bon and Tim Presley – are madcap; something so unconventionally idiosyncratic it’s unsurprising it was daydreamt by the pair. Adopting a non-conformist realm of brazen sounds, Drinks easily become a beacon of obscurity in an otherwise idyllic location; a location that charters every musical episode partaken through Le Bon and Presley’s varied careers. Drinks’ debut ‘Hermits On Holiday’ dresses itself in candid messages against a brittle longing for individuality. Simply put it’s a scripture that intensifies common fetishes of musical form.

Given Le Bon’s roots within the bleak lands of West Wales and Presley’s Californian psychedelic rock heritage, the union of the two backgrounds is a consistent skeleton the contorted minds body. Opener ‘Laying Down the Rock’ – typically accentuated with nudging guitars that drive against the folk laced guitars, it carries an Erland and the Carnival anxiety through its dynamic 60s trundling rhythms – creates room for Presley’s abnormally strong Northern Brit-pop vocal to float upon.

Genre melding is Drinks’ sphere; ‘She Walks So Fast’ – a bare boned tribute to Led Zeppelin’s ‘Black Dog’, it presents the disillusionment of a scatterbrain through the obscure narratives, bursting grooves and quaking blues guitar patterns that refrain from etching itself upon the drum of the ear; ‘Cannon Mouth’ – the fusion of Stockholm eccentricities of reflective Le Bon murmurs and warped funfair organs that generate the makings of ‘Hermits On Holiday’s most single happy track; ‘Focus On the Street’ – a melting pot of Young Knives stripped ambiances, Test Icicles fury and the Long Blondes swagger, the live atmosphere caught cuts a disorganised wave of Libertinesque hooks that ultimately is alive with the nasally instinctive tones of Presley. The resolute adaptability shining is a constant source of intrigue under initial frameworks that suggest Drinks may be toying with pop.

Nice and secure, it changes.

‘Split the Beans’ explodes into a psychedelic wave of uncompromising misperception that wilts only to reveal the hypnotic allure of Le Bon’s towering melody; one moment she’s hesitant, another enraged. It’s a whir of striking jazz that flutters out of the piano that opposes the disorientating blues guitar solo. The confusion of chaos almost becomes lost by the pummelling end and it becomes a source of oddity that the remainder of this inaugural release follows.

‘Tim. Do I Like That Dog’ is disruptive; the rhythm section’s continual refusal to fully commit something of a now natural trait at the nub of Drinks. Harsh, mechanical; a melodic masterpiece that counters the queer nature of the songs main story. It’s fair to say Le Bon really loves that pooch. ‘Cheerio’ contains a 90s organ that is so in touch with The Inspiral Carpets, the remainder of the track despises it. ‘Time Between’ is the only reprieve at the end on a track only Soft Hearted Scientists could perhaps create; it’s the perfect antidote to conclude the ear-battering weirdness of before.

The album’s title track is perhaps its finest. A simple, playful track that truly embraces Le Bon’s youthful, challenging range. The simplicity of it; the ease of the groove; the full embodiment of infant sounds – everything commonly expected when this – hopefully long – relationship was announced. For all the moments of maddening challenges that is faced throughout ‘Hermits On Holiday’, Le Bon and Presley still retain the ability to shock.