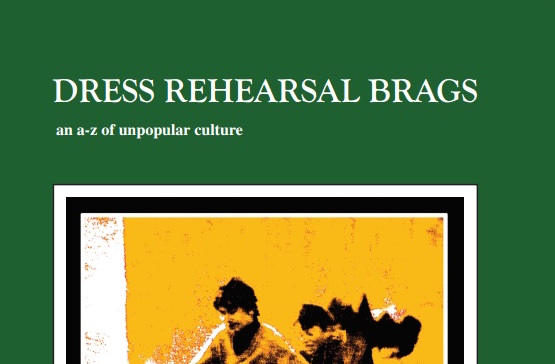 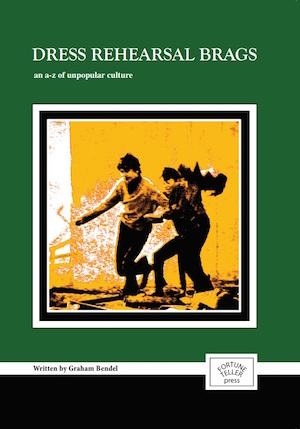 Some books promise to make you laugh endlessly and fail to even raise a smirk. Graham Bendel’s second novel (his first was ‘A Nasty Piece of Work’) comes with no such guarantees but had me, quite literally, in stitches. But this is far from a comedy book, the subject matter covered ensures that. Maybe more accurately it can be described as a ‘coming of age tale’ that has some very funny passages, but inevitably touches on much darker issues. Intriguingly, the book is written in an A-Z format that adds to the impact of the stories but never detracts from a superb narrative.

If that is not enough, it also features a cover design by original Killing Joke artist and Malicious Damage label founder Mike Coles.

Graham Bendel has completed independent documentaries about ‘Billy Childish’ and the punk-era band ‘Subway Sect’ (soon to be released). He has written for magazines, papers and various websites. In 2013, Stewart Lee included him in a surreal piece for The Guardian on John Cage – referring to Bendel as a “punk filmmaker”. Bendel has Dj’ed regularly at The Brixton Fridge, Jazz Café, The Wag and even played at an after-show for Prince.

Ahead of publication, Graham Bendel spoke to Louder Than War about the book and his film making.

Louder Than War: Graham, can you tell us a little about yourself – background as a writer and film maker etc?

Graham Bendel: I used to write for magazines like the New Statesman and Big Issue; and after that wrote a novel called Nasty Piece of Work, which was going to be made into a film had I signed the contract.

I’ve made two music documentaries. One on Billy Childish and the other is about the legendary Subway Sect and Vic Godard.

Have you been kicking around the idea of Dress Rehearsal Brags for a long time or is it a more recent idea?

Dress Rehearsal Brags was an idea I had a few years ago and was something that was completely mapped out in my head. I’d pitched to the usual ‘literary estate agents’ and got the same sort of response – How can you write about what appears to be your life when you’re not Paul Morley? I mean it’s not my fault that my parents had me instead of Paul Morley!? In any case, the whole point of this particular book was that it was NOT written by a well-known social or cultural commentator with great access to bands and celebrities. There are a hundred books like that! This is totally the opposite of all that: an everyman’s story, a kind of Diary of A Nobody.

Someone said to me “it’s like Catcher in the Rye had the lead character been into Killing Joke and had accidentally dry-humped Tanita Tikaram at a Desmond Dekker gig”. But it is more serious than that sounds, and deals with a lot of difficult issues like Depression, shyness and getting your haircut. It’s probably not going to win the Pullitzer Prize but hopefully it’ll make you smile often, and feel moved occasionally.

The A-Z approach is inspired. It sets the book apart from the conventional novel / memoir approach and seems to heighten the impact of the individual stories. How did you get that idea?

I hadn’t heard of anyone doing this and did a few internet searches and couldn’t see much evidence of a book like this. To be honest, I was set on doing my novel like this whether it’d been done or not.
Luckily, it worked really well constructing the book as an A-Z. Some people have declared that it isn’t really a novel at all but Richard Flanagan (the man Booker Prize Winner) remarked that ‘Novels are life, or they are nothing.’ So I guess I did something right, because despite the unconventional structure…this novel is exactly that: LIFE, from before birth to after death. It’s very silly, trivial, highly embarrassing, sometimes crude, and in the great scheme of things: quite ordinary. Just like most people’s lives. Except there are those rare moments of beauty and understanding, and some stuff about Sir John Gielgud, Menswear, Nancy Spungen and Your Cat Magazine.

Despite the above approach (which I’m guessing could have gone horribly wrong), a clear narrative does emerge, that must take some planning?

‘Clear narrative emerging’ is definitely music to my ears. Originally, I was being lazy and wanted to do a ‘dip in, dip out’ book so you could go through the entries randomly but then I realised that patterns were forming, with character traits, staggered punchlines and a narrative was establishing itself …so that meant more work. So another year and a half went by as it got more ‘logistical’ than was initially planned.

There are some hilarious passages throughout the book and as examples I would cite the Penelope Keith / Draughtsman’s Contract / Skinhead sketch, then J is for Jaz Coleman nearly finished me off before W is Wilko Johnson gig at Koko actually did. Am I allowed to ask the burning question … are these scenarios wholly fictional, based on some truth or absolute gospel?

I don’t want to spoil the magic by saying what’s true and what’s not. Some people expected nothing less than me chronically baring my soul to a humiliating degree and for much of this, I probably did exactly that. Though on saying that, much of it is artistic licence or just plain storytelling.

Glad you liked the Wilko Johnson story. A proper and decent writer would have focused on the emotion, pathos and huge significance attached to what was going to be Wilko’s last gig (due to his illness) – but I instead wrote about the Men’s Toilets. In reality, although I didn’t know him, I spent much of that gig sobbing into my beer at the thought it might be his last. Maybe I should have said that instead.

Despite the very funny elements to the book, there is a pretty serious undertone to the story as well. Did you find approaching the issues like depression and the Sophy obsession difficult? Is Sophy real?

Oh God. I lose sleep over this kind of thing. I didn’t want to include this entry in particular as it was very much based on something real and God knows what this poor lady would think if she ever read it. The depression aspect was certainly real and it does remind me of some very sad and uncomfortable times. But then again, I thought it was a unique way to discuss the soundtrack to those bad times, which was: Todd Terry, Frankie Knuckles, Robert Owens, Marshall Jefferson and a load of great House records which kept my head above water.

In addition to the imminent release of Dress Rehearsal Brags, you have made a documentary on Vic Godard and the Subway Sect. Can you give us a quick heads up on how that is going?

Subway Sect were a band I’ve been obsessed with for years and not so many people know them. Everyone knows Wire and The Fall. But Subway Sect are much more interesting, under discussed, have a cool back story and were extremely influential to many  – notably The Jesus and Mary Chain and Orange Juice. Plus they are the only other band I wanted to make a film about.

How did I make it?

Like I do everything: on my lonesome with very little help, no funding and with a massive sense of enthusiasm and a not giving a toss about having all the right qualifications. It’s the same deal with the writing: I just get on with it. It’s got a similar aesthetic to my previous one on Billy Childish and probably a bit of an affront to anyone who went to film school. So none of the usual visual grammar and no voice overs.

And why has it taken so long?

It got pulled from some planned screenings a few years back. Vic’s camp thought I was making something defamatory and negative (when it was quite the opposite, really), and it all got a bit stressful. But things are back on track. And, hopefully once the paperwork is sorted out, people should be able to see the documentary in September or thereabouts.

Dress Rehearsal Brags is released by Fortune Teller Press in May. For more information, please visit their website.

The book, priced £7.99, is due out 1st May 2015. It’ll be available from the website, Rough Trade and selected shops before this date.

All words by Dave Jennings, find his Louder Than War archive here. He is also on Twitter as @blackfoxwrexham.