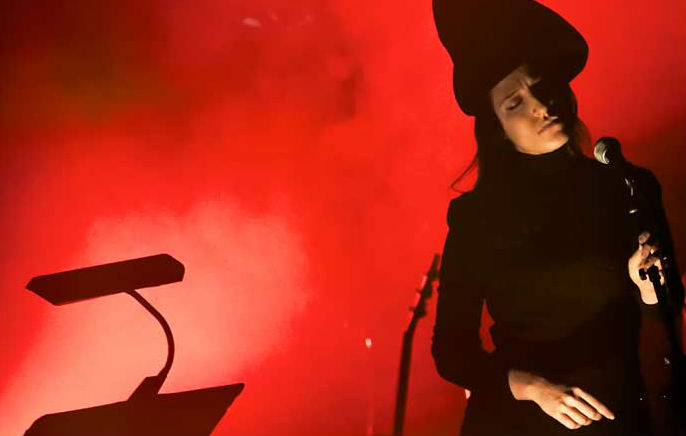 David Lynch’s wonderfully weird and beautifully unique films have confounded, terrified and inspired in equal measure. From his black & white beginnings with Eraserhead to the Noir colour of Mulholland Drive, each film offers a sensory experience as much for the ears as for the eyes. The soundtracks are more than mere accompaniment, they are a character speaking of feeling, flow and most importantly, internal insight. You only have to listen to the opening refrain of his 90’s TV series, ‘Twin Peaks’ to know how profound the collaboration between Lynch and composer, Angelo Badalamenti truly is. A match made in heaven.

A diverse cast of musical performers and technicians are brought together here, to bring to life a twisted, reinterpreted vision of sound with Musical director David Coulter looking to explore the boundaries in which the songs can exist. From the seemingly faithful to the outright bizarre, Coulter has produced a groundbreaking show that is as strange and magnificent as its inspiration.

In my haste and excitement at the thought of what the show was going to be like. I think I underestimated how effective it would ultimately be. From its seemingly innocuous opening ‘scene’ of a lumberjack (Coulter himself) sawing a log, the level of my discomfort grew as the tone shifted, turning the mundane into the terrifying, just with the use of it’s sound. Like a microscope that moves in closer and closer on a subject to reveal it’s hidden aspects, the sound of the sawing became magnified with reverb until it was a screeching din, like nails down a chalkboard. The very same saw is then used played with a bow throughout the evening as a haunting reminder but most affectingly as a solo instrument on the theme from The Elephant Man.

Each performer joined the house band on stage consisting of such legends as Terry Edwards on Saxophone, Pauline Haas on Harp and Seb Rochford on drums. Every performance brought something unique and enigmatic to the songs. Whether it was Sophia Brous’ acapella version of Roy Orbison’s ‘Crying’ or Connor O’Brian’s acoustic take on ‘Mysteries Of Love’, both from Blue Velvet. A consistent spookiness underpinned them thanks to the fantastic set design and lighting that created light and shadow which the imagination filled with trepidation.

My highlight of the night was Jehnny Beth from Savages singing on both, ‘Down In Flames’ from Wild At Heart and The Cocteau Twins’s ‘Song To The Siren’ which featured in Lost Highway. Her arresting vibrato and androgynous stature was utterly commanding. Lighter, more faithful moments came in the form of Conor O’Brian’s beautifully sung versions of ‘In Dreams’ and ‘Blue Velvet’. But the darkness was never far away, especially during Sophia Brous’ attempted version of ‘Blue Velvet’ where Kirin J Callinan’s violent guitar sonically beat her into submission, ending with her running off stage away from the violating guitar player wearing a pair of tights over his face. It did feel sprawling and at times awkward, especially during the encore song of the night, Chris Issac’s ‘Wicked Game’ where the whole ‘cast’ came back on stage. It was nonetheless playfully executed and consistently mesmerising to witness, just like a Lynch movie.