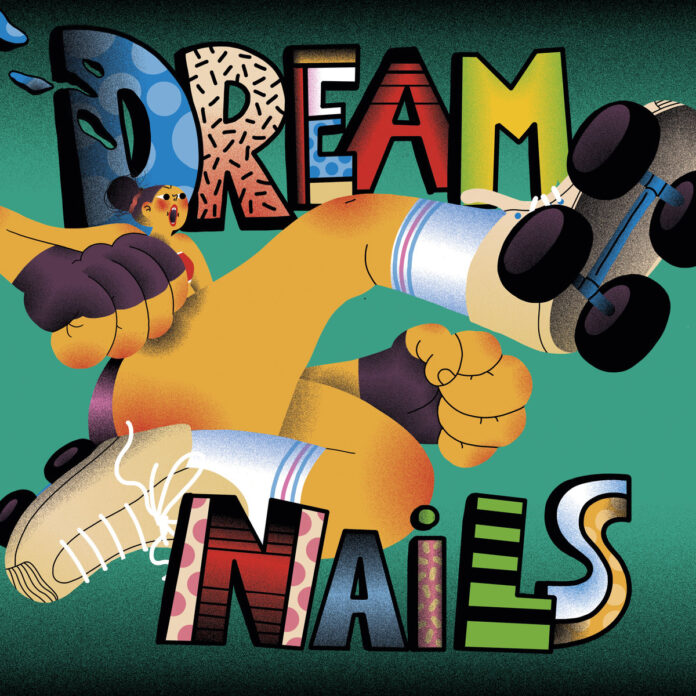 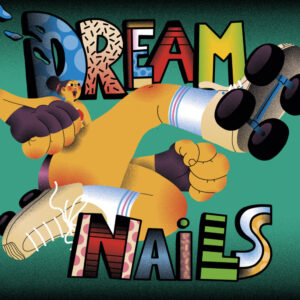 Andy Brown finds the punk ethos alive and well with London’s Dream Nails and reviews their incendiary debut album for Louder Than War.

I first heard self-described “feminist punk witches” Dream Nails back in 2017 when they supported the wild and wonderful Cherry Glazerr at the Brudenell Social Club. The kind of act that leave an indelible impression; the bands set tackled sexism and misogynistic politicians with passion, humour and a tonne of energy. “I can fix my bike up. Do it yourself! I can grow a salad. Do it yourself!” sang vocalist Janey Starling on DIY, “I can start a punk band. Do it yourself!” Introducing the band and their ethos in under 2 minutes. Positive, proactive and one hundred and ten percent punk.

The band’s debut album has been a long time coming; following on from a handful of singles, zines and a rather brilliant unplugged live album, Take Up Space! Building up a near-unstoppable momentum with their blistering live shows as they delivered their message to grassroots venues across the country. Garnering comparisons to riot grrrl forebearers like Bikini Kill and Huggy Bear. Then, as I’m sure you’ve all noticed by now, 2020 happened. Thankfully Dream Nails are here to provide some much needed punk positivity.

“I am ready” goes opening ‘skit’ Affirmations “I fear no one and nothing except the temptation to hold back”. Suffice to say, the band won’t be holding back. The first song, Jillian, is an utterly joyous tribute to celebrity fitness instructor Jillian Michaels and “coming out whilst working out”. An unapologetically ecstatic exorcism, “I feel the fear leaving my body”. This perhaps isn’t the angsty intro you’d expect on a punk debut album but Dream Nails aren’t your average punk band. While practising their best sneers in the bathroom mirror, some punk bands seem to forget to have fun. Dream Nails, on the other hand, effortlessly mix fun, anger, activism and energy.

Guitarist Anya Pearson manages to capture the raw spontaneity of early nineties riot grrrl acts with, to these ears, a dash of Graham Coxon on the ace Corporate Realness. “You are not your job/ work is not your life” screams Starling as the chorus explodes into life, “you are not what you must do in order to survive”. Before you’ve had a chance to catch your breath we’re straight into the immensely fun, Text Me Back (Chirpse Degree Burns). The band exploding like a ball of kinetic energy as they deliver a cheeky tune about the perils of a potentially unrequited crush.

Suddenly we’re thrust into the midst of a Dream Nails gig, “OK, women and non-binary people to the front”. A regular part of the band’s live performance and just one example of how Dream Nails are gleefully challenging the stagnant status quo. Starling expresses the bands support for their “Trans siblings” before the album launches into empowerment anthem, Vagina Police. When they released the song as a limited 7” a couple of years ago all the money raised went to the Abortion Support Network (ASN). If it wasn’t already crystal clear this is a band that actually wants to make a difference.

The frantic fun of DIY come’s next with drummer Lucy Katz and bassist Mimi Jasson making a bid to be punks fastest rhythm section. People Are Like Cities is a blistering and melodic gem that shows the bands innate knack for a great tune while Swimming Pool offers some bouncy and celebratory encouragement to someone on the verge of ‘coming out’. This Is The Summer keeps the energy levels high as Starling sings: “Fracking and flooding and land grabs/ Denial, money, white supremacy/ All dripping in oil”. Dream Nails are taking on the world and it sounds good. In fact, for a song about the imminent collapse of civilisation, it sounds utterly fantastic. This is a band out to inspire.

Next, we get the Rage Against the Machine meets Kathleen Hanna bounce of Payback. The Rage influence isn’t subtle but it fits the band perfectly. It’s a genuinely spine-tingling moment as they yell, “Hey! You! Mister! Get your hands off my sister!”. Kiss My Fist starts with an audio clip about the horrendous homophobic attack on two lesbians on a bus in London last year. The accompanying song is suitably incensed, “Do you want us on your screen? Do you want to hear us scream? Ask us to kiss again…KISS MY FIST!”

Dream Nails have poured all the energy and urgency of their live shows into the perfect punk rock debut album. The band’s music doesn’t try and reinvent the wheel, playing solid and energetic punk with buckets of sweat, love and enthusiasm. The fun is infectious, the anger palatable. For Dream Nails punk is simply the best outlet for their passion and activism, a suitably direct conduit. Angry, defiant and carrying a message of empowerment and hope. A band you can believe in.

You can buy the album (in various bundles) from Alcopop! Records here or from the band’s Bandcamp page here