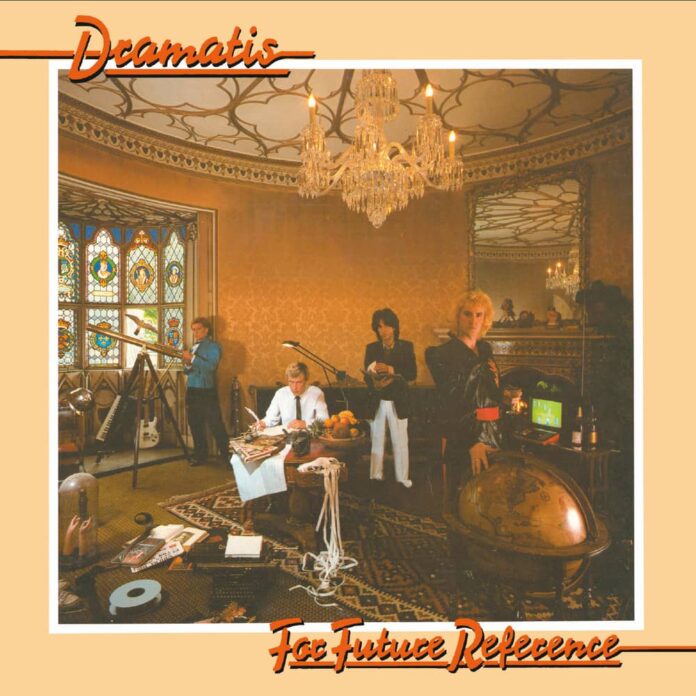 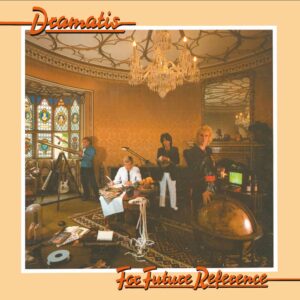 2CD reissue of the ex-Tubeway Army’s only album For Future Reference, plus single mixes and an eight song set taken from the BBC In Concert radio series, which was recorded back in 1982. Ian Canty bookmarks the link to look up later on…

When Gary Numan decided to retire from live performances in early 1981, it left his current backing outfit at something of a loose end. Most of this band were part of the final line up of Tubeway Army and also played on the first two Numan solo LPs The Pleasure Principle and Telekon. With bassist Paul Gardiner opting to go it alone, the remaining quartet of singer/keyboardist Chris Payne, drummer Cedric Sharpley, RRussell (his spelling) Bell on guitar and synth specialist Dennis Haines renamed themselves Dramatis and struck out on their own.

Of course it wouldn’t be too long until Gary stepped back into the live arena, but even so Dramatis made their first steps as a separate entity. The Numan connection meant they had a decent media profile and were soon signed up by Rocket Records, Elton John’s imprint.

The band quickly knocked a good set of songs, in fact the first Dramatis single Ex Luna Scientia emerged a mere month on from their final Numan shows in May 1981. Two more 45s in Oh! Twenty Twenty Five and No-One Lives Forever followed, before they released their debut LP in autumn of the same year.

This new collection commences with the nine tunes that made up the original For Future Reference album. Things kick off with Oh! 2025, the album version being spelt differently for some reason. The sparky single cut is featured on disc two of this set and the song’s lyric is a fairly chilling look at a future, something that seemed far away when it was written but is just around the corner from our perspective today. The doomy viewpoint is is allied to an attractive funk/electro pulse, which helps to lighten the finished product from its ultra-serious subject matter very agreeably. Another sci-fi nightmare vision Human Sacrifice follows, rendered with a harsher synth sound that still however retains some dancefloor appeal.

I Only Find Rewind has a low lead vocal playing it cool and downbeat with a clicking rhythm pattern and a slight Devo flavour to it, while No-One Lives following on sporting a slightly ridiculous but easy charm. Both show that Dramatis knew just how to make their dark machine takeover notions catchy.

In December 1981 they issued the Love Needs No Disguise 45, which was the next cut on For Future Reference. This was only UK Top 40 chart success and was recorded with their old pal Gary. Making the most of the connection, the record was credited to Gary Numan And Dramatis and released by his label Beggars Banquet. As the sleeve note alludes to, it was good the band made a breakthrough, but the negative side to this was it unfortunately seemed to underline the fact that they were always going to be associated as an off-shoot of the Numan brand rather than their own thing. The song itself has Gaz taking centre stage, but it is endowed with the kind of sparing touch that Dramatis excelled in.

Then comes Turn, which makes use of a strings intro, before the tune shuffles into earshot with a fuzzy buzz and a slice of progressive-style meandering. An angsty, piano-led meditation Take Me Home is in a Vienna-mould, but On Reflection ups the ante with a beat that reminded me of La Düsseldorf’s lighter works. The LP concludes with the album version of the debut single Ex Luna Scientia. It is probably is my ears, but I think this is a little like Pink Floyd’s Arnold Layne updated for the synthesised 1980s. The single version, which is appended to the second disc, represented a slightly mad but good opening gambit for the band.

To sum up, For Future Reference is an imaginative collection where the band escaped from the shadow of their mentor for a large part of the time (there’s no avoiding him on Love Needs No Disguise though). The rest of this disc is given over to single tracks and 12 inch mixes, with the first part of disc two of the set gathering the 7 inch cuts. The bounce of Lady D.J.’s longer cut is fun with some quite HM guitar soloing and Face On The Wall arguably deserved a better fate than its failure to register on the charts. It is both bright and memorable, one of the band’s best efforts in fact. By the time of heir post album 45s, Dramatis were slimmed down to a three piece with the departure of Haines to 60s legends The Hollies.

Instrumental flipside Pomp And Stompandstamp has meaty guitar weaving in and out of wobbly electronics and The Shame’s 12′ mix is a suitably epic, with a flowing dance rhythm. Final 45 I Can See Her Now made a brief UK chart showing at 57 and is given a long piano intro on 12″, before a primitive beatbox and sawing guitar line kick in. This is full of mystery and engaging. Perhaps it didn’t quite have a strong enough hook for the pop charts, but that is to take nothing away from what is a fine piece of music.

One Step Ahead is a spirited, speedy synthpop wonder in both 7″ and 12″ forms and an extended No-One Lives Forever impresses. The oddity in this section of the disc is the first track on the second disc For Future Reference, which has four album tracks Turn/Only Find Rewind/On Reflection/Human Sacrifice spliced together to provide a sampler.

The final part of disc two finds the band caught live at the Paris Theatre in London during May 1982 for a BBC In Concert appearance. Sand And Stone, not on the LP, swoops in with electric wave crashes and paranoid, mannered vocals. What emerges is similarly large-scale sound to Ultravox with Midge, but the vocals give a sense of their own identity. Dramatis present a solid sonic attack here, seeming thoroughly at home on stage on the edgy I Only Find Rewind and a confident go at Face On The Wall.

I Can See Her Now gets an injection of pure rock power and then one segues into a busy take of Turn. It is good to hear Love Needs No Disguise sans Numan, it works just as well with Chris Payne’s voice and The Shame provides a fitting finale to what is an entertaining live showing.

Just as Dramatis were looking towards a second album, Gary Numan asked them if they would come back as his band for live dates and in the studio. They had always stayed on good terms, so the offer was accepted and thoughts of a follow up LP were forgotten. However Bell and Payne have recently reunited under the Dramatis name (Cedric Sharpley sadly passed away in 2012) and released the A Torment Of Angels single in 2020.

Dramatis’ heavy involvement with Gary Numan initially helped them a great deal. But on the other side of the coin, the lack of clean break in the long run stymied their efforts to make a name on their own. A shame, as they had some interesting ideas which took in a wider range of influences than most electronic outfits of the time and this enabled them to explore some intriguing areas. This set comes with a new interview with RRussell Bell and helps give one an inside view of the band and especially the songs that made up For Future Reference. Fans of doom-laden but sometimes strikingly beautiful synthpop will find a good deal to love here.

Dramatis are on Bandcamp here