Home Music Dragster: interview with one of the best punk bands on the UK... 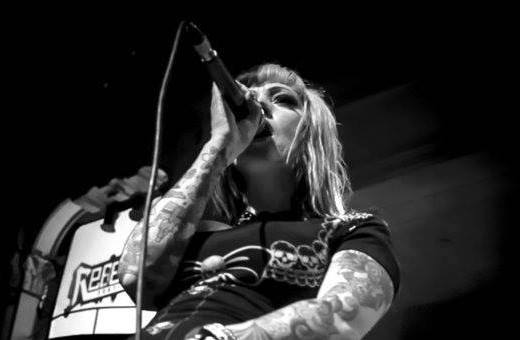 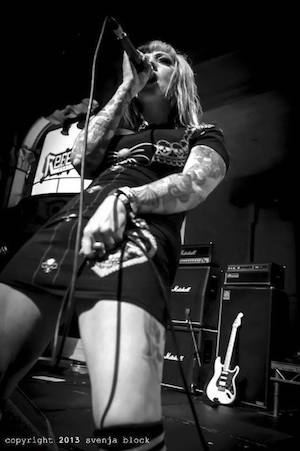 The UK punk scene is full of great bands who battle on despite the odds stacked against them.

Dragster are one of the best- a tight and fierce punk rock band with a switchblade intelligence and a deep love for the sex and danger of illicit rock n roll. In 2014 it seems strange to call this kind of music ‘outlaw music’ but with the mainstream media is even more saturated with mundane, polished, fake, alternative music and the mainstream press a talking shop for metropolitan luvvies.

Bands like Dragster are locked out of the world they should own. This is a shame as the band are at the top of their game now, their new album, Dead Punk, is their best yet, combining a filthy rock n roll with great tunes and an untamed Amazonian intelligence – this is a true alternative pop music- one that is raw and alive and full of the sex music.

Frontwoman of the band, Fi, is the most charismatic woman singer on the scene with an amazing, raging onstage presence and has a rock n roll heart full of belief- she is wild and opinionated but also has a beautiful soul- a committed vegan and old school believer in the good stuff but also full of explosive fun and adrenaline danger she should be a star but her band’s commitment to doing things the right way and the media and radio’s terror of guitar music has meant the grass roots way for the band that has seen them gain a firebrand and fervent underground following.

It won’t be for ever someone one day will feel this explosive ball of energy somewhere on the planet and Dragster will hopefully get the mass audience they deserve.

The same as it was back in 1977, to upset the establishment, make people think and to have a good time.  Unfortunately, the establishment have gotten wise to us and for a good while now the mainstream press and record labels have largely ignored punk music, unless of course you’re American or a media friendly watered-down version of punk.  Shaking up the system and speaking out for the down trodden is more important than ever with all the cuts, wars, racism fuelled by the media, dumbed down TV and music boiled down to a business formula. The establishment doesn’t want controversial lyrics, music that makes people think and question their reality.  Punk is still dangerous in that way so it is marginalised and treated as an historical event, rather than an on-going movement because to acknowledge us is to validate us.

What do Dragster bring to the table that is different ?

We don’t tie ourselves down to a formula, we’re open to experimenting with our sound and not sticking to what we’ve done in the past.  We write music we enjoy and try not to over think it in terms of ‘does that sound punk enough?’  Punk is an attitude as far as we’re concerned and that’s the most important element for us and hopefully that comes through in the music and the live performance.   Our new album ‘Dead Punk’ is definitely the most cohesive sound we’ve created as a band and has taken us in a slightly different direction, one we’re all excited about.  The lyrics are more blatantly political than in previous albums, there is less of a psycho-billy influence and more of a hard core undertone to the album, while still maintaining our hedonistic rock n roll roots.

Where are the girls?

My sisters!!  Heather ‘H-Bomb’ Mars had to return to the States, she is currently living in Austin, Texas and still writing and playing music.  Wendy X was raising a family at the time of her departure and the increased tour schedule was difficult, but she continued to make music with former dragSTER drummer Wippet and the late, great Gus Chambers (Squad/Grip Inc./Criminal Class) in Mantra Sect.  She is now writing, playing and touring with the fabulous Army of Skanks.  It was a unique time in dragSTER history and I do look back on it with a great fondness.

You are very stylish- is that a key part of the Dragster way?

Thanks!  I don’t know if it’s the ‘dragSTER way’ or, whether we’re just five very vain individuals??  Hahaha.  I think we all make an effort but, as a female I guess I make more of one.  I think it’s good to have a ‘look’ it helps people identify with what you’re about.  I have a love for old horror movies, the 50s, Bettie Page, Goth music and I think my look is a combination of all those things.

What does it take to make music in these harsh times?

Times are definitely hard and unless you have backing from somewhere it can be a long process.  We probably spent about a month or two in the studio but it was over a period of nearly two years, partly down to finances and partly down to not having a drummer for a while. It would probably be even longer if we didn’t have our label, STP supporting us. On the plus side it’s never been easier to be a DIY band, the internet provides many platforms to get your music out there, so you just need to exploit those avenues as much as possible.  On the downside, there are a lot of bands for people to wade through on the internet and that can make it difficult for a single band to get noticed without financial backing.  Major labels use these platforms to pay for their bands to be advertised and have priority, it’s difficult to compete with their budgets. I think you just have to be realistic about what you can achieve, be as good as you can possibly be and keep chipping away. 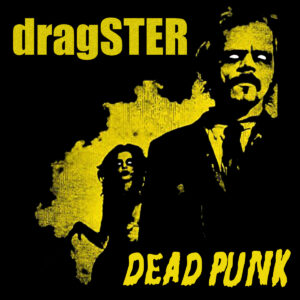 You are outspoken about being vegan etc does this come into the music?

I am very passionate about animals and the suffering they are put through for human wants, I don’t call them needs.  It hasn’t come through in the music as yet, as I would want to get the balance right with the lyrics.  I don’t want to be too subtle but, I also don’t want to be ranty and when writing lyrics of that nature I haven’t managed to find that balance, it’s too raw an emotion and ends up being a preachy, ranty mess of a song.  One of the songs on the new ‘Dead Punk’ album, ‘Cattle Prod’ started out from a bunch of words I had brain stormed about the meat and dairy industry and Diesel took it up but, was struggling with it and I just said ‘Why don’t you turn it into an analogy of how people are being treated as commodities/cattle’ and he flew with it from there.  I’m sure it will happen, I just need it to be right for people to understand my position and to not be turned off by animal rights issues.  There is no filter of my emotions on my Facebook page, or my Twitter, as they are my thoughts, feelings and beliefs, but as part of a band I need to respect other’s opinions and although I’m sure dragSTER (especially as two of them are vegan) would support such lyrics, it needs to be done right.

What was the record that changed your life?

There have been many records that have informed me, helped me through bad times, made me want to jump up and down but, in terms of truly believing I could front a band, I think that would have to be ‘Big Bad Baby Pig Squeal’ by Silverfish.  Hearing Leslie Rankine’s voice was an exciting moment for me, as although she can carry a tune she wasn’t exactly singing, she sounded strong and powerful and I knew that was the kind of vocalist I wanted to be. It has brought me to this period in my life where I’m loving what I’m doing, getting up on stage and performing, doing that in the UK and all over Europe, meeting some great people along the way, so that’s pretty life-changing.  Silverfish were a great band and I suggest anyone who hasn’t heard of them to seek them out.

Do you think rock n roll can still change the world or has that battle been won/lost?

I don’t know if it can change it but I think it can help alter it. I think that’s why punk is ignored and treated as a retro genre by the mainstream music press, labels and media.  Throughout my life other people’s lyrics have inspired me to make changes, and to challenge the way I perceive the world around me.  They have made me question the official story, look for the truth behind the hidden agenda and question authority.  Sometimes someone’s experiences made into a song are the only snippets of truth we get in a society where TV, education and news are tightly controlled and dumbed down