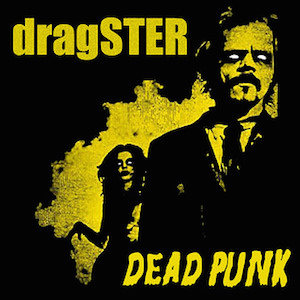 Long overdue second album from Coventry based Dragster, and the first material from the new line-up.

Opening with a burst of radio interference before ‘Gatecrasher Hostage’ instantly pummels you to the wall, this is a huge beast of a song that positively thunders along – from the machine gun drum refrain to a huge grinding riff its clear Dragster have not been idling their time since their ‘Here Come The Meat Robots’ debut, Fi’s vocals are clear and strident, the chorus on title track ‘Dead Punk’ is a joy to behold as Fi trashes the ‘punk -seen it all before’ shite spouted by the barely breathing UK music press…

Dragster don’t just confine themselves to basic four chord punk rock, they have evolved into a molten behemoth spitting out the dirtiest scuzzy rock ‘n’ roll, take ‘Drink You Pretty’ – a filthy off kilter riff topped with a massive mosh-pit rousing chorus, whilst ‘Cattle Prod’ takes a lyrical swipe at the current ‘state of the nation’…the self-mythologizing ‘Dragster’ is one mean muthafucker, a 3 minute assault on the senses that will you leave you sorely bloodied, by the time you’ve recovered and drawn breath ‘The Dead Are Out In Droves’ is already half way through – joylessly kicking the living shit out of everything in sight, however this merely serves as a teaser for the highlight of the album, the joyous ‘Terminal Loser’ which builds around cavernous bass and drums before Fi hollers skyward “Misfit, I Am A Misfit” as the song builds to an enormous rabble rousing chorus; at this point I am thankful for the CD pressing as a simple click puts this monster on endless repeat.

Fi steps aside for vocal duties on ‘Just Wanna Fuck’ an under 60 second speedball paean to carnal lust, but they’re far from finished with you…the swagger of ‘Liar Like That’ rips from the stereo, a relentless head rush that puts paid to Dragsters own claim that Fi merely ‘screams’

‘Meat Robots’ was good; ‘Dead Punk’ however is the album that will elevate Dragster above the other punk contenders out there, every track is rammed full of snotty aggression, though all the while built around simple yet effective song structures – Dragster understand that it’s not all about noise, making a racket is easy, the skill is making a meaningful racket and ‘Dead Punk’ effortlessly demonstrates Dragsters ability to do exactly that.