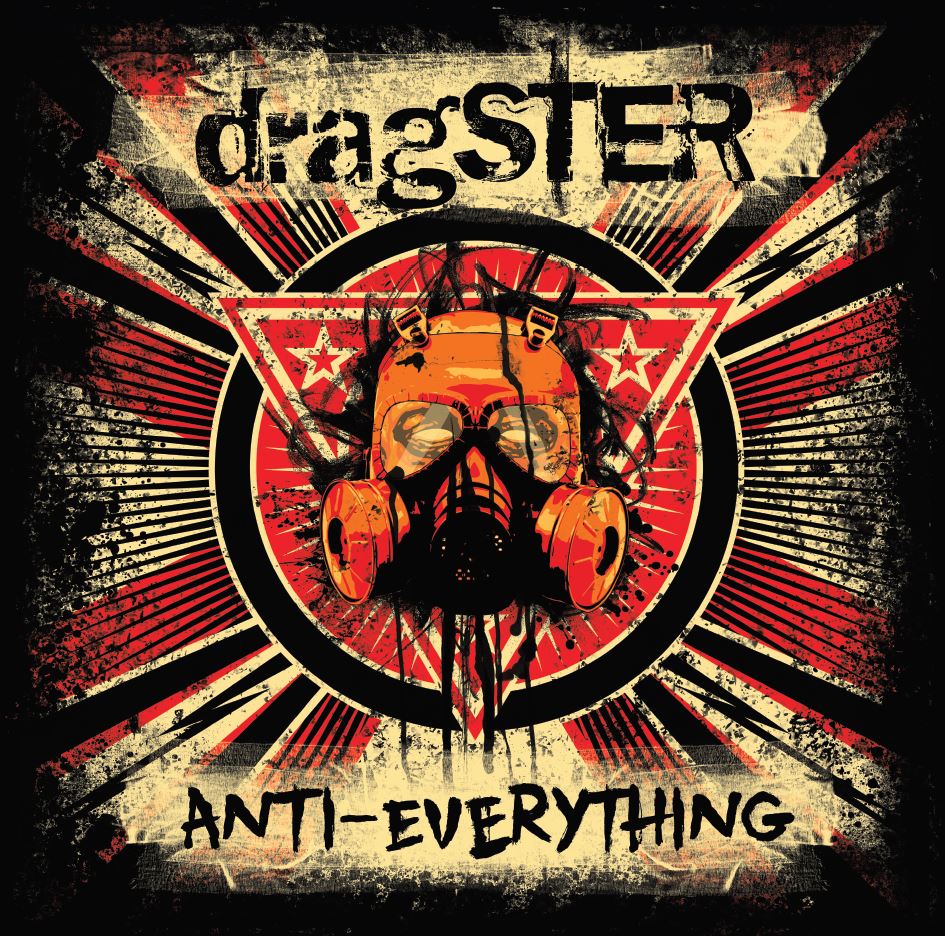 From the moment you are confronted by the paranoiac Orwellian album cover art of a face encased in a gas mask to protect you from a world gone insane, to the opening beats of Bad Cop, you know that you are in for a heavy journey through a modern world gone askew, controlled and distorted to such a degree that no-one knows the truth anymore, where an avalanche of data just leaves us knowing nothing. dragSTER’s reaction is to create an album called Anti-Everything which posits a nihilistic rejection of everything, yet, thankfully, they aren’t just an in your face angry band with no wit or ideas. This is hardcore with intelligence.

dragSTER are from Coventry, that once great motor city that withstood the blitz but whose industry fell to the Thatcherite dream of the 80s. The city that gave the world Two-Tone has always had a vibrant music scene, though it often requires digging to find the gems. Anti-Everything is dragSTER’s fourth album, and it comes on the back of a lot of hard gigging to create a loyal and growing following. Their image is one of B-Movie schlock and video nasty sensibilities and they play rock ‘n’ roll distilled to its rawest level, its most brutal. They are a Molotov cocktail with strings, drums and the melodic screaming of singer Fi.

Album opener, One Bad Cop, has a Dead Kennedys vibe to it that mixes up B-movie splatter punk with political attack.  The driving, raucous beat transforms into a great chorus that shows dragSTER aren’t short on killer melodies. The first track to be taken from the album, Damned, starts with a robotic, haunting sound with an Eastern European undercurrent. It is Goth tinged hardcore, like a dark cabaret of Grand Guignol terror, the heavy beat a dark paranoia clicking away at the base of the neck. It’s a damn good rocking song.

The album’s title track, Anti-everything, expresses a feeling many have in the UK at the moment: just being fed up with it all! The vocal fits in perfectly with the heavy beat, the bass and drum sublime, which anchors the beat for the guitar to rock out to. It has the sound of a crazy car race; imagine 50s drag cars racing down dead beat roads.

United Decay opens with a sound bite from The Prisoner: I am not a number! Staccato guitar then grinds in, sounding like the constant buzzing of a drone that watches our every move. There is an overwhelming sense of oppression and paranoia, but it still manages to have a great, chanting chorus. Spit It Out has a great rock riff and sounds like ’77 punk on speed, whilst Drone Pilots is hard core d-beat anger; it’s 50 seconds of hell in music. It’s followed by the military beat of Vultures Circle which has a middle eight that reminds me of The End played over Apocalypse Now.

Tokyo Joe has a great, strong melody which, lyrically at least, reminds me of Telegram Sam. Charmed To The Teeth has a great little riff that showcases dragSTERS ear for a great melody. Dark Roulette is another Dead Kennedys’ style song with a Klaus Flouride guitar riff and East Bay Ray bass line. And Enemies has a great opening that builds up into a powerhouse of a song.

The album is rounded off with Broken By Design, which has a more American Punk sound to it a la Ramones. The melody here is more to the fore than the anger that came before and has a melancholic edge to it. Here, the song is about knowing everything is broken and just wanting to get away from it all.

Anti-everything mixes up punk, hard-core, metal and seasons it with B-movie splatter gore and anger to create a mixed up metaphor of horror and real life terror at the state of things in the world today. What raises dragSTER above other hard core bands is their ear for a great tune beyond the heavy beat.

Anti-Everything serves as a cataclysmic soundtrack for a world gone awry.

To coincide with the album’s release dragSTER will be touring the UK & Ireland, confirmed dates being:

Further UK dates plus trips to West Coast USA and mainland Europe are currently being booked for later in the year.