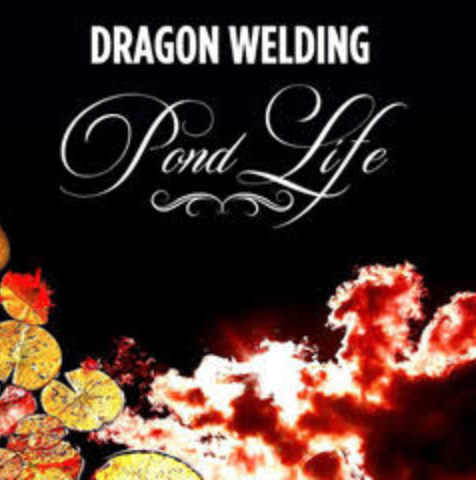 Andy Golding of The Wolfhounds has a new EP out on October 1 under his DRAGON WELDING alias. The EP is called POND LIFE but it’s not about some of our fellow inhabitants but more intriguingly the 4 tracks which are called FROG, NATTERJACK, NEWT and WATER BOATMEN concern the creatures of ponds.

It’s ambient-electronic instrumental fare, and probably some of his best work so far outside of The Wolfhounds with hints of Mouse On Mars and other electronic adventures far away from the clattering brilliance of his band.https://orcd.co/dragonweldingpondlife

Known primarily as the guitarist for song-based indie-rock outliers The Wolfhounds, Essex, UK native Andy Golding has quietly been crafting some extraordinary instrumental music in recent years under his anagrammatical Dragon Welding alias. His second album “Lights Behind The Eyes” was released earlier this year, a favourite of BBC 6Music’s Gideon Coe, and an atmospheric affair that Andy described as “Neil Young waltzing with Laurie Anderson at the Chigley Six O’Clock Whistle while The Durutti Column watches over Brian Eno as he turns the handle on the fairground organ”. By contrast, “Pond Life” is a more beats-driven electronic excursion, one that takes its inspiration from nature’s eco-systems, four intriguing vignettes that skitter and slide, that pulsate, observe and then hop out of sight like their namesakes.

Andy recounts a family trip…”We couldn’t understand why there were so many frogs and toads and spiders in a confined but secluded idyllic spot. There was no obvious pond in the immediate vicinity. Then the smell from the early morning and late night trundle of oversized lorries down narrow country lanes started to intrigue us. The leafy glade hid an industrial compound which turned out to be a facility for recycling fallen beasts, their unwanted flesh and bones deemed unsafe even for pet food. When decomposition of abandoned earthly forms is your business, your main by-product is flies. Lots of flies. Later in the summer we decamped to Norfolk in the hope of filming some newts, water boatmen and other surface tension wonders, but sadly even the frogs and toads couldn’t protect us from the invisible airborne enemy. Stay safe”.