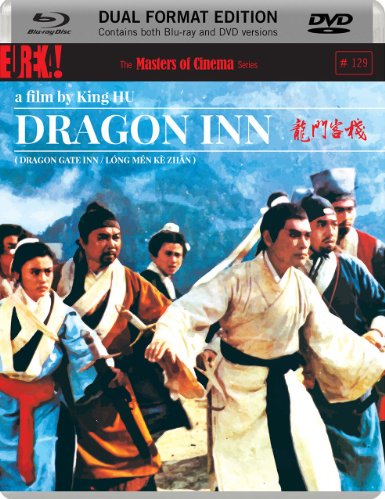 Jamie Havlin reviews one of the most influential martial arts films ever made. Welcome to the world of Wuxia.

Set in China in the middle of the Ming Dynasty and belonging in the category of wuxia, where the heroes resemble a cross between chivalrous knights and gunslinging cowboys, this was the first film that King Hu made after leaving the famous Shaw Brothers Studio.

With Dragon Inn (or Dragon Inn Gate as it is sometimes known) he helped kickstart the Taiwannese cinema industry and also laid the foundations for many of the genre’s archetypes that still exist today in martial arts movies, including the swordswoman and the children of a murdered relative hellbent on revenge. Additionally, it has also inspired some of the world’s greatest filmmakers, including Ang Lee (think Crouching Tiger, Hidden Dragon) and Quentin Tarantino (think Kill Bill) and the film itself has been remade twice, as New Dragon Gate Inn in 1992, and then again in 2011 as The Flying Swords of Dragon Gate.

Here the children of the assassinated Minister Yu have been exiled to a remote desert outpost but are being secretly hunted in an attempt to end their bloodline by an elite squad of killers known as the Black Arrow Troop, hired by Cao (Pai Ying), an ageing and asthmatic eunuch leader who likes to be carried aloft by his servants on a sedan chair.

The siblings, one male and one female, arrive at the titular Dragon Inn, where they meet Xiao Shaozi (Shi Jun), a supercool swordsman with a good heart. Xiao agrees to help them in their battle against Cao and his murderous troops and they’re joined in this very much against the odds task by innkeeper Wing Mu, a friend of Xiao and former ally of Yu.

Really though, the plot plays very much second fiddle to the action, in particular the sword fights and believe me there are a lot of those. In fact, Dragon Inn contains the sort of spectacularly high death count that would put the average spaghetti western to shame. To paraphrase some lyrics of an old seventies novelty hit: the characters fighting are usually as fast as lightning; perform with expert timing and for the bulk of the movie things are definitely more than just a little bit frightening.

Shot in a time before wirework, some of the highly choreographed action might strike modern viewers as a little old fashioned, particularly the jump cuts Hu employs at times but for a film that is almost fifty years old, Dragon Inn is surprisingly fresh and the swordplay scenes are always rhythmic and highly imaginative. And years before the aforementioned Tarantino gave the world the Bride, Polly Shang-kuan as Miss Chu was demonstrating her abilities as a kickass female fighter.

Dragon Inn was something of a blockbuster and broke box office records at the time in Taiwan, Korea and the Philippines and director King Hu later went on to direct A Touch of Zen in 1975, which won the Grand Prix at Cannes that year, one of the first Chinese language films to score such an impressive success on the international film festival circuit.

There is some stunning widescreen cinematography on display throughout and this restored version looks truly amazing but Dragon Inn won’t be for everyone. It is, though, the perfect introduction for any film buff wanting to learn more about the wuxia genre and while it veers on the ridiculous at times, I found it a fun watch and enjoyed it far more than I suspected I might.

You can watch the trailer here.

Extras include a highly entertaining and informative documentary by critic David Cairns and a 36 page booklet.