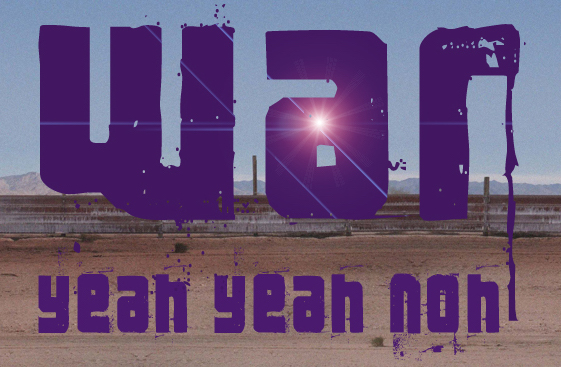 Quintessential Peel favourites Yeah Yeah Noh, the post-punk / jangle-pop band with an astute sense of mocking humour have a new single out today, with an album set to follow mid April. Grab a track off it above.

To celebrate the new album Yeah Yeah Noh’s people got in touch with Louder Than War and asked if they thought y’all might like a free download off said album. Naturally we said yes and that’s exactly what’s available above – just click on the little downward pointing arrow in the top right hand corner to grab the track, or just click here.

✓✓✗ (as their fans used to also refer to them) first announced they were returning to the fray of modern music back in 2012 with a John Robb interview on these very pages. Soon after that we ran a review of what was effectively their “comeback” gig in their hometown of Brum and which ended with a call to arms and the words “they’re fun” – a statement clearly signalling that the band were not only back but were playing as well as ever.

Famous fan Stewart Lee remembers the band fondly and upon hearing of their comeback he was quoted as saying:

“Yeah Yeah Noh were my favourite mix of sneery post-punk and swooshy psychedelia. And now they’re back.”

…and our John remembers them fondly too, of course, as they were one of the key “death to trad rock” bands whose charge to the fore of nation’s consciousness was led by his band the Membranes and their zine Rox – hence the interview referred to above.

The new album seems to blend both of their recognisable sounds – the discordant DIY clatter of the early years with lyrics as sharp as a pin and the later more psychedelic sounds, to result in collecting of songs the press release describes as continuing in “…the eclectic tradition of permanent revolution, drawing on diverse influences to create a chocolate box full of unique pop flavours.”

We will, of course, have a full review of the new album running some time soon, till then enjoy the track above, In A Loop In Time, and this video for the new, Cherry Red released single “Let’s Start A War” which, to quote from the Youtube page, is “available in all the usual places”.