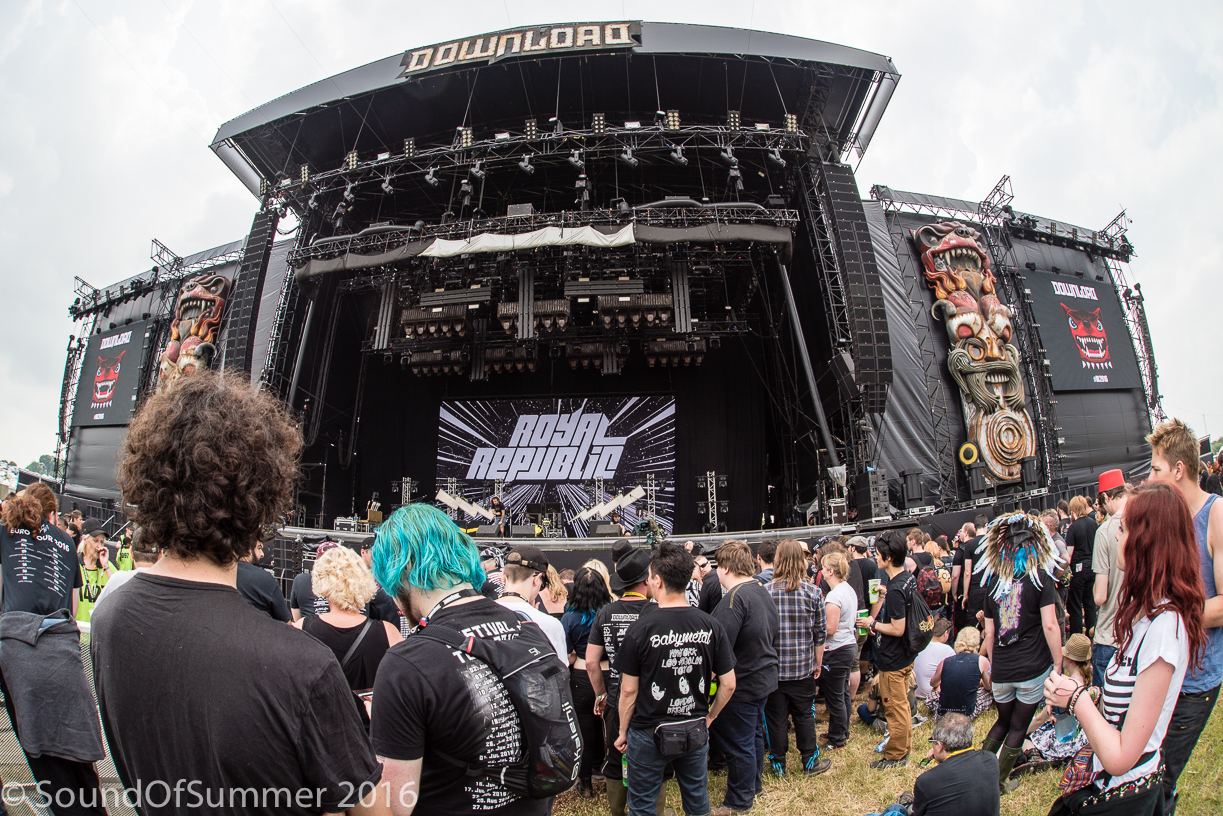 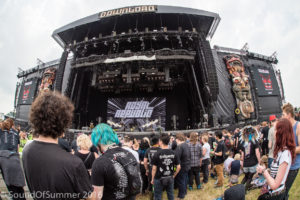 In the movie Field of Dreams Kevin Costner was told “if you build it, he will come,” build it they did and once again the fans flocked to Download Festival to pay homage to the worlds greatest rock festival.  Alan Ewart was among the thousands and reports on this years event.

Download festival has a way of sucking you in.  The main stage this year was dedicated to Motorhead legend Lemmy Kilmister and featured a lineup packed with the top names from the world of rock and metal.  Download also has a way of lulling you into a false sense of security when it comes to the weather.  As I entered the area on Friday I was greeted by the sight of numerous sunburnt bodies.  Those bodies belonged to the fans who had arrived at Download on Wednesday to get themselves “match fit” by drinking huge quantities of beer in the sun before the festival proper started on Friday. 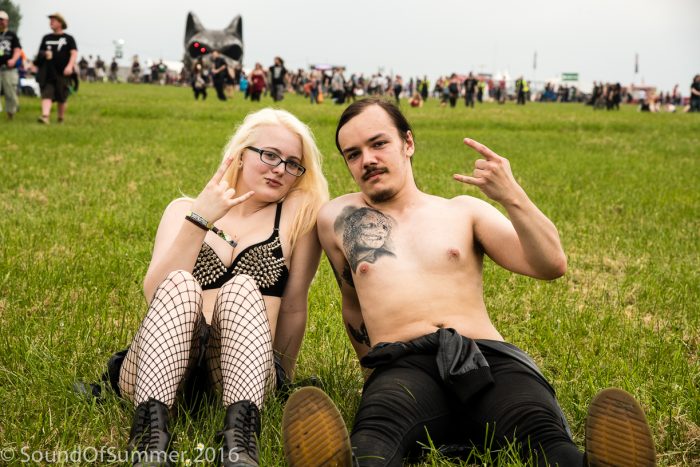 The sun continued to shine on Friday morning but you could feel the heaviness and humidity in the air and you knew that when it started to rain it would rain hard.  Rain it did and when it did it did so for most of the next three days.  I was reminded of an old postcard I once saw that said “I went on holiday for a week in Ireland.  It only rained twice, once for four days and once for three days.”

Of course this is Download and rain is not going to stop the dedicated rock fan from having the weekend of their lives.  It seemed to me that ticket sales had been better than last year as everywhere seemed to be busier.  All those additional feet meant that by the end of Friday an arena that began the weekend as a beautiful grassy meadow was turned into a swamp with about three inches of horrible stick sludgy mud everywhere.

Download fans come in two varieties when it comes to rain.  Some cover-up with coats, poncho’s and hats and try to stick it out.  Others strip off their shirts and shoes and ask “rain, what rain?” 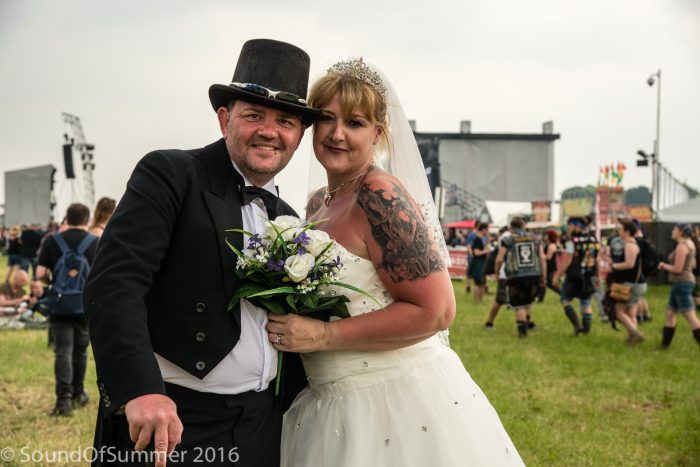 I’m not sure why it should be the case but I tend to take my musical pleasures away from the MainStage at Download.  It may be because I am more into the punk, hardcore and metalcore scene.  I fell out of love with rock when punk exploded in the late 1970’s and it’s only over the last five years or so that I have got back into it.  This means that a feel a greater affinity with newer bands than with the veteran rock bands who tend to feature high on the MainStage bill.  I also love discovering new bands on the smaller stages.

I did really enjoy what I saw of Royal Republic and Korn on the MainStage but it was Killswitch Engage who really grabbed my attention.  As you would expect the band showcased several tracks from the recently released “Incarnate” album but they played old favourites from right across their back catalogue.  The Download crowd loved it as Jesse Leach celebrated the rain with a host of comments that do not bear repeating here.  Killswitch Engage are rightly regarded as one of the most important bands on the Metalcore scene and they showed why with a dynamic and hard-hitting set that worked the crowd into a frenzy.

Away from the MainStage folk-rock outfit Skinny Lister turned in a blinding set.  They admitted that they were not sure how they would go down with the Download crowd.  They needn’t have worried, if Skinny Lister don’t get you moving you are probably dead.  They certainly won over the metalhead’s and had the entire tent bouncing and cheering along.  Havok, Counting Days and From Ashes To New also turned in excellent performances.  All are relative newcomers and they certainly hint at a very bright future. 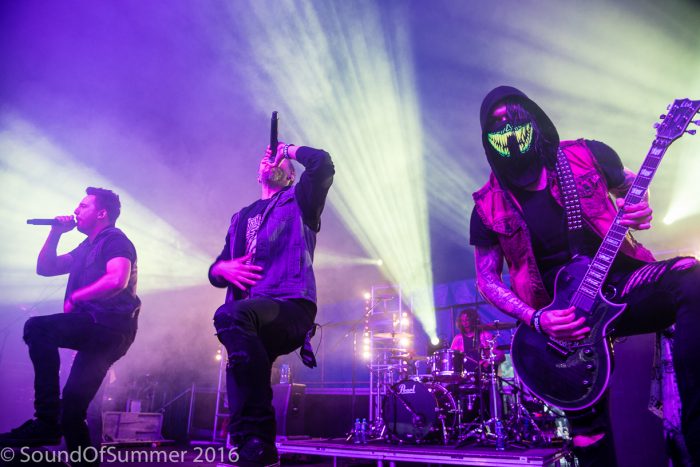 The Zippo Encore stage was the scene for the two performances I enjoyed most on the day.  Aussie Metalcore outfit The Amity Affliction were a revelation.  I have enjoyed the band for a number of years but oddly this was the first time I have caught them live.  It won’t be the last the power and aggression in their set was a real spine-tingling moment and the band have a great way of getting the crowd on their side.  With a new album set to drop in August we will be hearing a lot more from The Amity Affliction.

I saw American pop-punk outfit All Time Low supporting Green Day a couple of years back and was very impressed with them at the time.  Their Download performance was on a totally different level.  The crowd went crazy when guitarist Jack Baraka joined the crowd at the barrier.  With six albums under their belt it was a bit of a surprise to hear All Time Low cover Greens Day’s American Idiot but the Download fans loved it.  Security must have been thrilled when All Time Low invited half the audience to join them onstage. 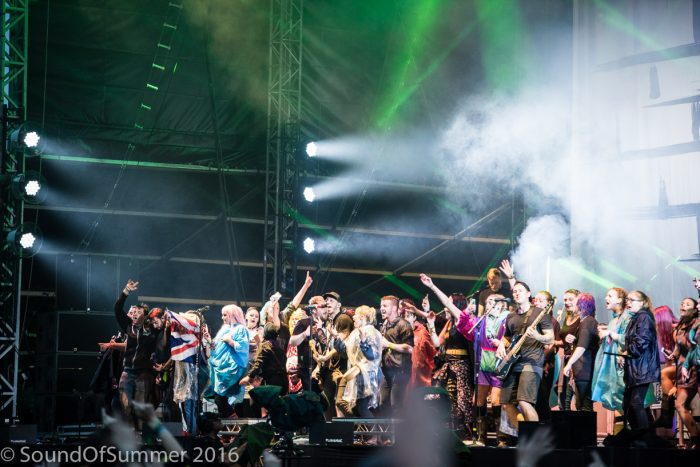 I rounded my day off with headliners Rammstein on the main stage.  The Industrial rock outfit are renowned for their stunning live performances, their use of pyrotechnics borders on legendary.  I confess I don’t really “get” Rammstein.  I freely accept that what they did was great and their stage show was very good.  The problem for me is that I connect with a band through the power of their lyrics.  Rammstein sing in German so I don’t understand a word and consequently I struggle to connect with the band.  Of course that is my issue, not theirs and most everyone I spoke to reply enjoyed their performance.

I ducked out of the arena a few minutes before Rammstein finished in a bid to wade my way through the quagmire before the rush.  Once again Download had managed to captivate me, even the mud couldn’t dampen my spirits as I trudged up the hill to my van.

Of course Friday was just the beginning and there were two days to come.  As I lay in bed, I said a little prayer to the rock gods asking for some dry weather for the rest of the weekend.  It seems that those prayers went unanswered as the rain continued, but it takes a lot to dampen the spirits of Download fans at what must surely be the worlds best festival.

Download Festival is on the internet here:  The festival is also on Facebook and Tweets as @DownloadFest