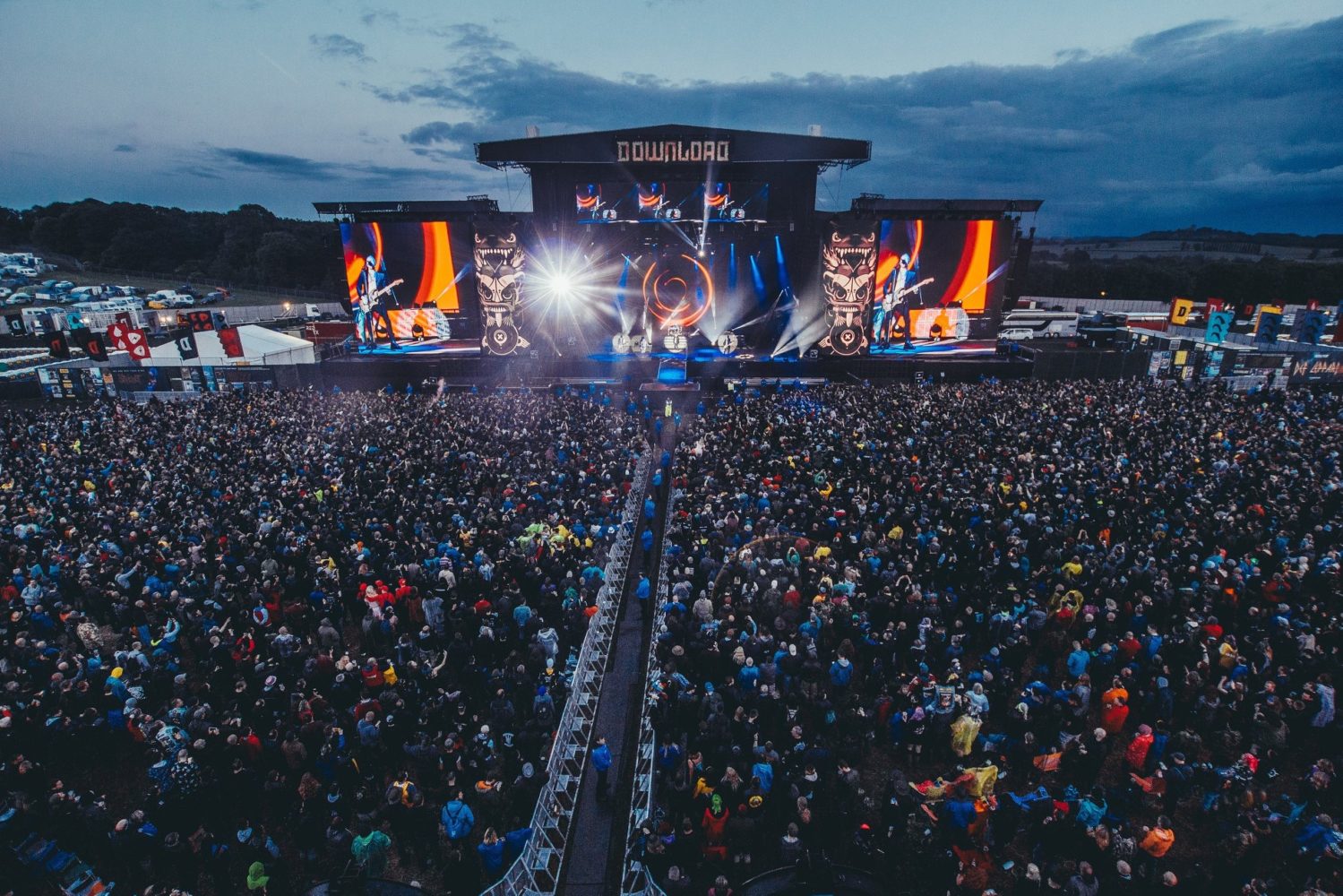 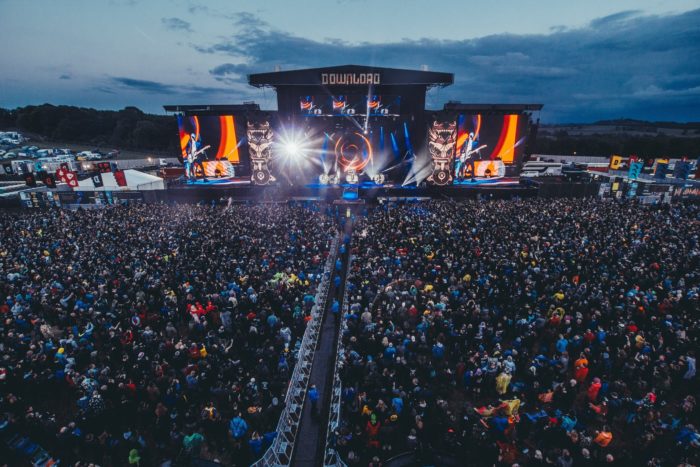 Download Festival – Castle Donington’s yearly heavy metal gathering woke up from its yearly slumber, awakening the locals to deafening effect. Matt Mead joined the thousands in attendance to review for Louder Than War.

Drownload, Mudload, Mudfest and many more nicknames have been afforded to this year’s festival due to record amounts of rain seen across the Derbyshire hills prior to the festival even starting. With wellies being the main clothing essential, I head to the festival with a thought ‘will I be able to make it out alive?’. Fortunately the festival is laid out perfectly, with the wet stuff not dampening any spirits among the masses.

I arrive on Friday to Whitesnake on the mainstage belting out their 80s soft rock classic Is This Love; lead singer David Coverdale, looking like Robert Plant’s twin brother, screeching out his vocals – encouraging the baying crowd to join in, going down into the crowds to forcefully encourage participation, particularly as the opening bars of Here I Go Again start up with a guitar duel going on stage. The perfect introduction to the festival has begun.

Other bands on the launch pad are Opeth,with their unique take on thrash metal. When Adam Ant introduced duel drummers in the 80s he started a revolution. Opeth however sound like they have a marching band on stage – the drum sound is the equivalent of having a million drummers on stage, all playing at 100 mph. Guns ‘n’ Roses guitarist Slash is up on the main stage next, ripping his way through his own tunes whilst wearing a ‘Hey Ho, Let’s Go’ Ramones T shirt. Vocalist Myles Kennedy sounds like a refreshed Axl Rose especially on Roses cover Night Train, getting excitable old timers up and at it in the crowd. 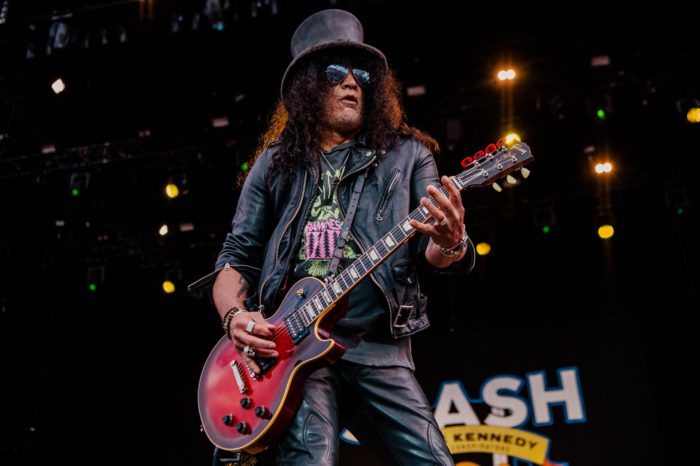 Friday night head liners are those masters of soft rock Def Leppard. Giant screens are lowered down to stage level with a ticking clock on show – counting down the time until lift off. When that time arrives, the band walk on stage to their cover of Depeche Mode’s Personal Jesus. The set is centred around them playing their classic album Hysteria – kicking off with album opener Women – bare chested guitarist Phil Collen slicing into the riffs with showmanship ease. The band glide their way through the rest of the album including well-known hits Rocket, Animal, Pour Some Sugar and the love torn title track with immaculate ease.

Midway through the set vocalist Joe Elliott leads the tributes to sadly departed guitarist Steve Clark – with the on-stage video screen introducing Steve playing a solo to a screaming 80s crowd – bassist Rick Savage standing in a classic rock pose to salute Steve. A poignant moment. One-armed drummer Rick Allen also gets well deserved plaudits from Joe with the crowd rippling loud and long applause. After Rick was caught in a horrendous car crash in 1985 where he lost his left arm the band’s first gig was playing the former Monsters Of Rock festival: thus Donington has a special place in the bands hearts. Rick also shows no sign of waning, looking like a cat whose lapped up its cream, smile abroad on his face throughout the show.

With an encore of another delicate ballad When Love And Hate Collide plus the well-known set closer Let’s Get Rocked, the band leave the stage with Joe echoing yet more praise on the crowd, also promising they will be back. 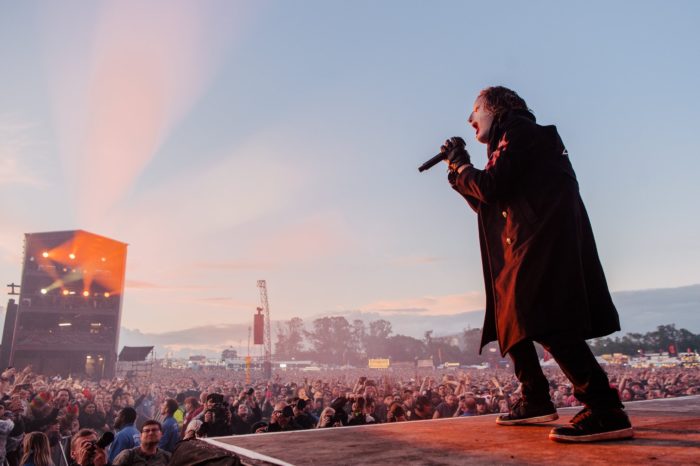 Saturday starts with a look around the site. There is much more than just music on show here. We have wrestling – not mud wrestling – but actual real wrestling, tight speedos and submissions to boot. The world air guitar championships are in full swing too, giving the likes of Hendrix, Clapton and the aforementioned Slash a run for their money. Back to the music, Trivium roar louder than an tiger in the wild, their music resembling Muse mixed with Iron Maiden. Stone Temple Pilots feature singer Jeff Gutt, looking like The Cult’s Billy Duffy, cool shades with blond slicked-back coiffed hair, they entertain with a sound not to dissimilar to Thin Lizzy’s popular grooves. Nothing.Nowhere mix hip hop type rapping and dark beats, sounding like a cross between Depeche Mode with the vocals of The Streets.

In my years of attending gigs there have been a few suspect gigs that have stood out for being that little bit more extra special than your normal gig. Sultans Of Ping live at Nottingham Polytechnic back in the 90s when they sang of jumpers was bizarrely charming and I thought that would be the most peculiar of the lot. Die Antwoord are made of something completely different. Imagine 90s hard-core rave, the vocals of The Cheeky Girls, with Ant and Dec dancers adorning the stage and you have Die Antwoord. However instead of a few hundred people enjoying the set, they are playing the mainstage supporting Saturday night headliners Slipknot.

Over on the Dogtooth stage Batushka bring some normality to proceedings with candles, chandeliers, a fine looking long dining table and thrash metal all on stage at the same time. You’ll be glad to hear no cutlery was damaged in the midst of all this. Halestorm enter the Zippo stage with their foot-to-the-metal 70s rock, playing opener Do Not Disturb with excitable vigour, with vocalist Lzzy Hale looking like Chrissie Hynde but sounding like primetime Skin. The Wonder Years have the crowd in the Avalanche/Kerrang tent singing exuberantly with their mix of excitable rock.

Band of the day Simple Creatures treat the half-filled Avalanche tent to bouncy electro pop – some would be fooled into thinking The Pet Shop Boys were about to enter stage left with the sort of light and visual show afforded to the West End Boys. With an array of humorous banter between songs including topics like Malcolm In The Middle, fending off complements from the crowd plus inviting a group of unicorns, yes unicorns, on stage, Mark Hoppus and Alex Gaskarth joyfully bounce about the stage – they even include their own cover of Personal Jesus plus a exuberant new tune Nevermind. A band to watch out for.

Sunday starts with one of the leaders of thrash metal Anthrax. Rapid fire drums and instrumentation hypnotically have the crowd running in circles, literally. Vocalist Joey Belladonna has the crowd in the palm of his hand with his take on Freddie Mercury’s Eh Ohs. Payale Royale play with a hint of The Stooges, vocalist Remington Leigh is also half dressed aka Iggy, climbing half way up the tenting girders to conduct the crowd to go mental to their set-closer before throwing his mike up high before it crashes to the stage.

Before the crowd await for Fever 333 to enter the Avalanche tent Aha’s Take On Me, George Michael’s Careless Whisper and Michael Jackson’s Thriller are aired for the crowd to try out some mass karaoke. When 333 enter the stage to one of the biggest crowds of the weekend with chants of their name ringing out, their music is not too dissimilar to Rage Against The Machine’s fierceness, with vocalist Jason Butler running a marathon on stage within the first ten seconds of the set. Dream TheatER excite on the Zippo stage with their feet on their monitors, 5 stringed bass pinging into action and ELP keyboards mixing a unique sound. 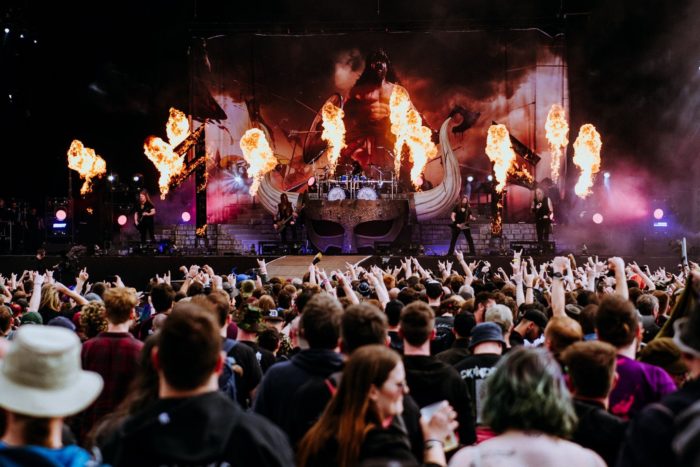 The final acts are Smashing Pumpkins and Sunday night headliners Tool. Billy Corgan – draped in long black robe – looks like a bald-headed Star Wars villain, but instead of a lightsabre as his choice of weapon he has a mix of guitars that he chooses to enshroud the crowd with throbbing feedback and squeals of noise. Included in the set are well-known classics – the acoustic chimes of Disarm, the rock sleaze of Buller With Butterfly Wings plus a further mixture of new and old material. If you come to Smashing Pumpkins for the joys of life you’re in the wrong place – smiles are not found here, however Peter Hook’s son Jack is on stage as one of the two bassists plus a backdrop of three enormous blow up dolls.

It’s been 13 years since Tool were on the hallowed Download stage, which has only made the heart grow fonder for the return of Maynard James Keenan and co. The band’s unique progressive, rhythmic metal was beaten out for all to see. As a four-piece they are as tight as they come, sounding as perfect as their studio material. Tracks featured include The Pot, plus longer takes on Parabola and Schism, reaching into psychedelic section with a sweeping light show projecting onto the giant screens to produce an emphatic ending to the weekends proceedings. A perfect and fitting ending to a more than interesting weekend of sight and sounds covered in mud. Let’s do it all again next year…