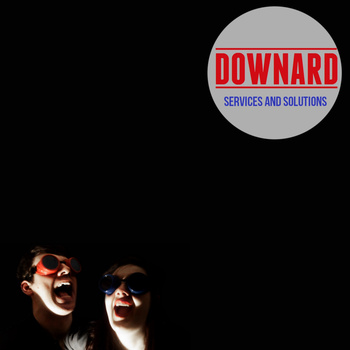 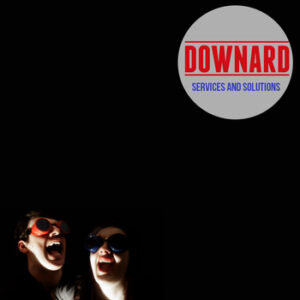 Downard – Services And Solutions (self released)

The power trio: a staple of rock ‘n’ roll as old as the music itself. From Jerry Lee Lewis and the Jimi Hendrix Experience to Nirvana and METZ, it’s a tried and tested formula and, as they say, if it ain’t broke…

Then bands realised splitting the gig fee three ways just wasn’t going to pay for all those drugs and tubes of hair gel, and when you’ve already got a Vox AC30 and full drum kit in the back of a Renault Clio that Ampeg stack’s a bit of a squeeze even with the seats down, and so the bassist was out and the power duo was in.

Bristol noise makers Downard have reclaimed the two-person line up in favour of the four strings – albeit with a Clio’s boot full of effects pedals – and their punishing riffs sound all the stronger for it.

Miss Katie Sue Louise Mizen (as she is credited on Bandcamp) is the force behind Downard’s low end whilst Mr Andy Robin Picket beats the living hell out of what must be a very sorry looking drum kit and occasionally wails incomprehensibly in the background.

It’s like Queens of the Stone Age recording Rated R on the maximum security ward from Silence of the Lambs.

The pair’s debut EP, Services And Solutions, comprises five mostly instrumental tracks in which Mizen’s thundering, distorted bass has the lead role. Effects are subtly employed to vary the texture and timbre throughout their very unsubtle onslaughts of major riffage that never let up for the full 18-minute duration.

If you think an EP of just drums and bass would get dull and repetitive then you underestimate the creativity of Downard; the duo have more than enough tricks up their respective sleeves to keep things fresh. They like to play with time signatures, lopping a beat off here, adding an extra one there, catching the listener off-guard with a cheeky 7/8 bar. It gives everything a slight math-rock flavour.

Sections flow organically from one to the next, never sounding disjointed but constantly evolving. If Mizen’s bass is the star, then Picket’s drums must surely win the Oscar for best supporting actor. What is striking about his playing is how infrequently he puts in a fill; a lesser musician would clutter the space with unnecessary fancy stick work but Picket  never detracts from the groove and gives the songs the rise and fall of good dance music.

EP closer Scary Morning is the best example of this. As a vocalist Picket is used sparingly (you can hear him properly with their three-piece project Langur) but always to excellent effect. First track Victory Home Zone sees him hollering wordlessly under a blanket a reverb, as does penultimate song Breakfast Arrangements. Cut It Mellow is the only track to feature lyrics, but it’s a moot point since most of them are indecipherable behind a wall of vintage delay and the band’s solid riffing.

Downard will be playing with NOPE (featuring members of That Fucking Tank) at the Stag & Hounds in Bristol on Thursday June 19th.

Services And Solutions is available to download now from their Bandcamp or to purchase on CD from one of their shows. They are due to play at Bristol’s Noise Annoys September 4th.

All words by Ben Tansey, find his Louder Than War archive here.