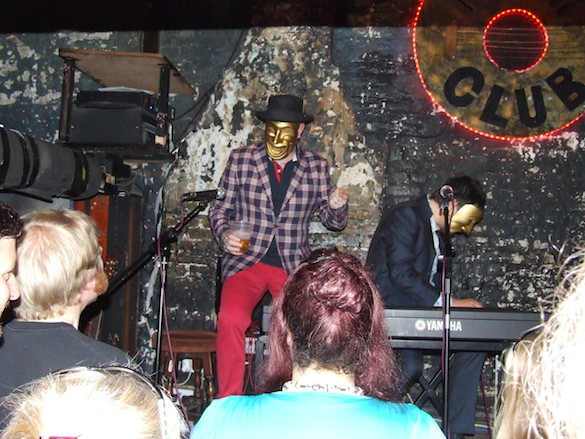 As a thank you to Pledgers, Jon Poole and Willie Dowling, aka The Dowling Poole, play an ‘intimate’ show at the 12 Bar Club in London. Louder Than War’s Martin Haslam was there to review.

You know those occasional years when your birthday seems to stretch out for days due to unexpected treats? Well, excuse me for mentioning mine, but this was one of those occasions.

Some of you reading this will already know the shocking amount of talent that is The Dowling Poole; Random Jon Poole of Cardiacs/God Damn Whores/Ginger Wildheart Band/Lifesigns and more and Willie Dowling of The Grip (I am THAT old)/Honeycrack/Jackdaw 4. If you’re lucky, you Pledged for their new album, ‘Bleak Strategies’ and cherish it for the psychedelic slice of summer that it is. 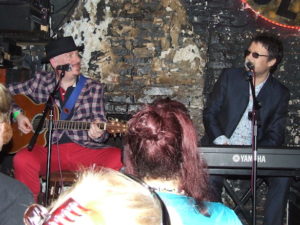 As a thank you to Pledgers, The Dowling Poole put on a free acoustic set at the ‘intimate’ 12 Bar Club in Denmark Street, London. Think ‘your lounge’ but smaller. And sweatier. But nice all the same. Iconic, even, as the witless powers that be wanted to tear this area down for re-development. There is an online petition which you ought to sign. Check their facebook page.

The sometimes dynamic duo are ably assisted tonight by Givvi Flynn, who has put her stamp on their songs with her magnificent voice. If anything, her vocal range gives the album continuity and beauty. Review coming soon…

Jon and Willie take to the stage wearing golden comic/tragic masks, until it’s clear that they can’t sing with them and it’s too damn hot anyway. Essentially, the course of the set is ‘a song, followed by a motivational talk/rant by Willie’. I know this doesn’t sound enticing if you don’t know them, but it is part of their bizarre charm.

‘Bleak Strategies’, for all its sunburst tunes and upbeat melodies, has a darkly melancholic heart. I’d put this down to Willie but given that the bulk of the album was co-written, it’s impossible to tell. Jon has an onstage persona of foul-mouthed court jester, but some of his solo/GDW songs are fuelled by anger and despair at human stupidity, so, who knows?

What I DO know is that, either way, these are fabulous songs. ‘Hey Stranger’ is dedicated to Cardiacs leader Tim Smith, but it isn’t any less lovely if you don’t know this information. Even given the bit that sounds a smidgeon like the Jim’ll Fix It theme tune (sorry!). Similarly, ‘Empires, Buildings And Acquisitions’ can be taken for the melody alone, though it vents spleen at Donald Trump’s attempts to buy off the locals around his proposed golf course site in Scotland. Some people, reassuringly, can’t be bought.

‘A Kiss On The Ocean’ has the best of Jon and Willie, complete with audience singalong parts, while ‘Clean’ allows Givvi to take a central vocal role against a Beatlesque backing.

‘Saving It All For A Saturday’ is a highlight; everyone here joins in the chorus instinctively, as you would if you’d been here. The album really is a grower.

All too soon it’s over. I finally get a chance to meet Jon in the flesh, having interviewed him via email previously. He is lovely and only slightly random, though the night is young. Alas, I have to get an early train home. Birthday over, I think, but what a way to go.

All words by Martin Haslam. You can read more from Martin by checking out his Louder Than War author’s archive.