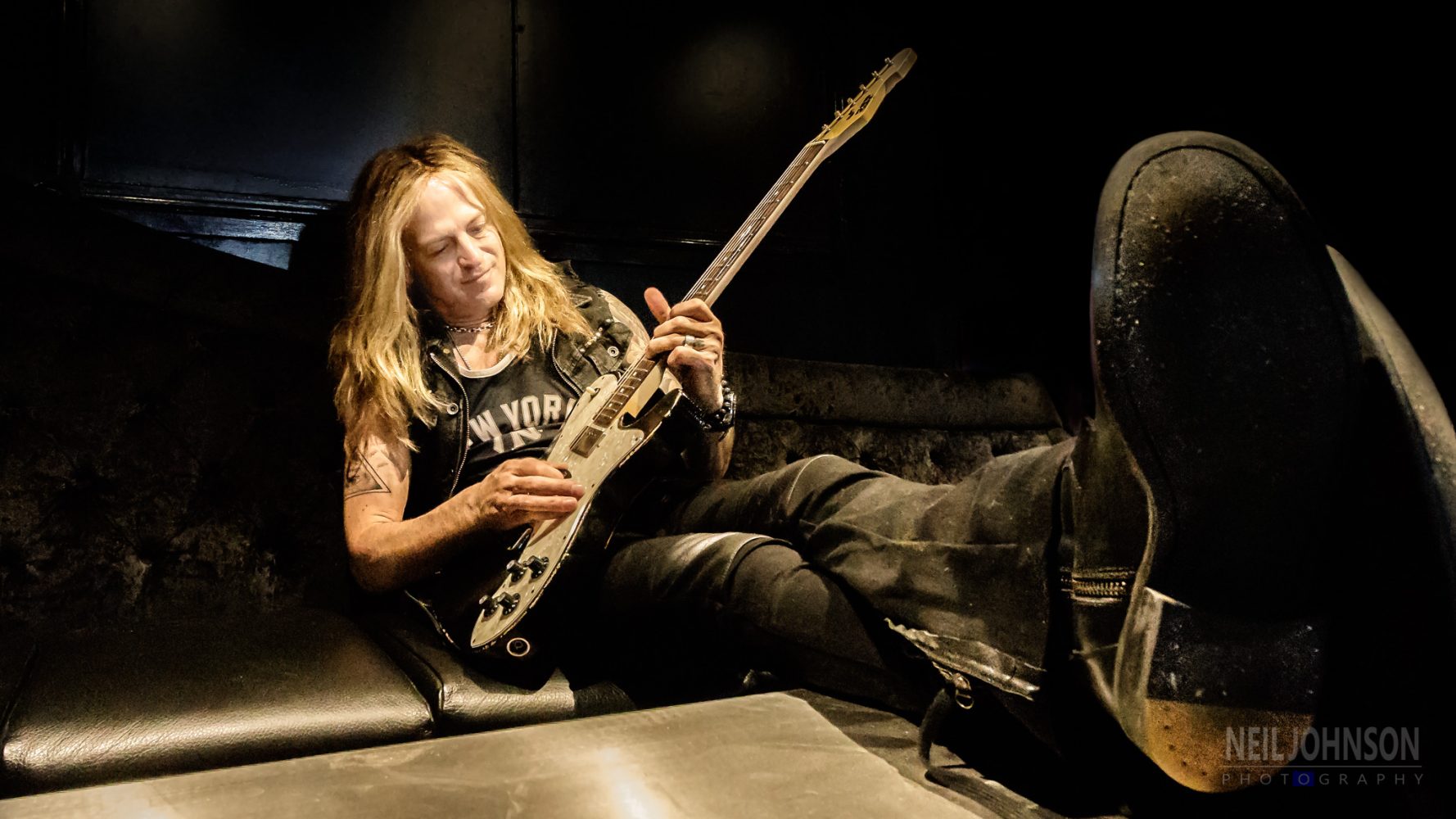 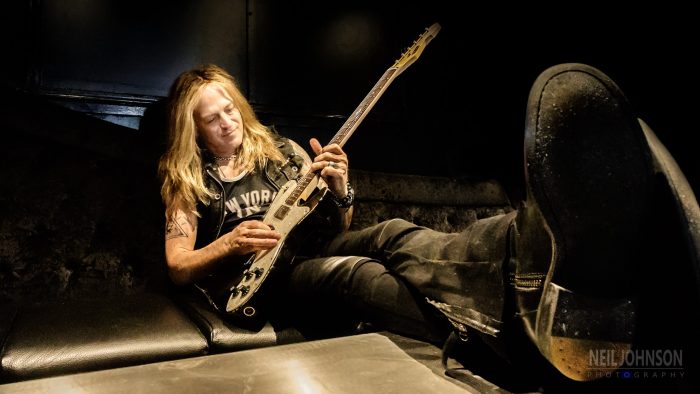 Doug Aldrich has played with Whitesnake, Dio, Lion, Hurricane, House of Lords, Bad Moon Rising, Revolution Saints and is the current lead guitarist for The Dead Daisies. We catch up with him backstage at Rock City just before the Dead Daisies  Nottingham show.

Setting the scene for this, Doug and I are back stage at Rock City, the Amorettes have just hit the stage and are in full flow and Doug is doodling on his guitar for the entire duration of the interview. The only time he stops playing is when we take the header photo for the article.

LTW: Thanks for taking the time to talk to us Doug, especially just before the show. I’ll try and keep things brief!

DA: No worries, it’s a pleasure to get a chance to talk to you.

LTW: The Amorettes are in full flow out there behind us, what do you think of their show?

They rock! They are awesome, really great music and we’ve loved having them out on this leg of the tour with us and The Treatment too. You guys over here in the UK have some great bands!

LTW: I reviewed The Dead Daisies Burn in Down last month and absolutely loved it, some really strong tracks on there and it’s been on my playlist ever since the first spin. But, what have you been listening to lately?

DA: Thank you! We’re really pleased with the new record, it’s a little bigger and we’re really proud of the songs. I tend to be quite eclectic in what I listen to. I love the classic guitar players, but I often listen to things really hard and get burned out on them, then go back and re-listen again way later. Right now I am loving Jeff Beck’s Truth album, it has a real classic vibe to it that I love. Hearing that record fresh after not hearing it for a while and it sounds really bad ass. I’m also listening to a lot of Hendrix and also Zepplin. Me and Brian Tichy who was in the Daisies before actually has a covers band Moby Dicks playing a ton of Zepplin stuff and I loved learning all of that and playing it with him. Also, I pick a lot of stuff up from my kids, my daughter loves the really heavy stuff, my boy’s favourite band is Motley Crue so there is always a lot of that played around the house. We also have these dance parties at home where we’ll have Bruno Mars, Shawn Mendez and The Weeknd playing. A lot of different music really, I tend to jump around a lot.

LTW: I am always amazed when I look back at artists back catalogue, there is always something in there that I’ve missed or am surprised by that they’ve played on. Yours is full of stuff like that. We associate you with Whitesnake and The Dead Daisies but you’ve got such a huge discography I’d love to hear which albums you’d rate as your strongest and which one could have been better?

DA: You know, I tend to think that all of it could have been better. There are always parts that I’d play differently if I got to do them again, or maybe I think that I didn’t put enough time in on that piece? or maybe put too much time in on a piece and should have left it alone! Musically I’m most proud of the work that I did with Whitesnake, David and I learning to work together took some time to get right. That process isn’t easy and you have to get to know each other and be in the same place musically. Forevermore is probably my favourite song and i’m really proud of how we worked together to create it.

As for the least favourite, back in the late 80’s, I did a record called Slave To The Thrills with the band Hurricane. A lot of people really loved the record when it came out but it was really difficult to make, I was butting heads with the producer the whole time and when the original mix came back I really didn’t like how it sounded. It actually turned out pretty good in the end, but the process to get there was pretty difficult and it’s hard for me to listen to now because it brings back those memories.

There is always something though, on every record I’ve done. Even on the latest Dead Daisies record, I’d be talking with the producer and say ‘hey, I don’t think this is sounding quite right’ but he’d say ‘I absolutely love it!’. In the Daisies, we’re pretty old school and the producer has the last word. We’re not like a lot of the newer bands that are recording in their own studios and mixing our own stuff, although you can get a really great sound that way. We prefer the more old school way of working where Marti Frederiksen has the final say in what goes in and what doesn’t.

LTW Note: I went back and listened to Hurricane’s Slave To The Thrill after this interview after not hearing it for close to twenty-five years and it sounds pretty epic!

LTW: So, knowing that we didn’t have much time for this and that many of my friends are huge fans of yours, I thought that I would ask them to provide me with some questions to ask you. The first of these is from the landlord at the Mushroom Hall pub in Albert Village. He says that he’d absolutely love you to come and play a gig in his pub, but he really wants to be prepared for your arrival so he was wondering what kind of beers you like to drink?

DA: Hahaha! That’s really cool of him and of course, I’d love to play there sometime, my schedule is pretty busy right now but who knows, I’d love to try and fit something in at his pub!. As for beer, if its a proper one and it’s done well I really love Guinness. Over in Dublin is my favourite, but I’ve had some great Guinness over in Belfast too. Everything has to be just right, nice clean lines and in the right glass and then its great. In New York, I’ve had really good pints and some of the worst pints of my entire life! We were doing interviews in New York one day, we decided to take a break for lunch and we went into this bar and i ordered a Guiness, the first signs of how bad things were going to be was when it came out in a Bud Light Glass, it tasted horrible! watery and nasty.

LTW: What are the best and worst things about being on the road and how do you manage to keep in touch with your family whilst you’re away?

DA: We facetime at least three times a day. Its a must do for me. Sometimes if I have to leave before they wake up I leave the kids a message for them. I think that it’s really important for kids to hear from their parents if they have to be apart for a little while.

LTW: Do the kids get to come along with you when you’re out on the road?

DA: My Daughter is two so she doesn’t but my boy is eight now and he’s been to a bunch of shows with me. When he was three he came on stage with Whitesnake once and he’s come out on the road with the Dead Daisies too, he travels with us sometimes and just plays with his toys. He’s usually by my side most of the time asking to play with my phone or something!

LTW: My friend Gabby is a huge fan of your hair and he’d love to know if you have any advice for the older rockers out there that want to keep their long hair looking good?

DA: Hahaha! These really are great questions! I have a great hairdresser and that helps a lot, but lately, I’ve taken to not blowdrying my hair at all and just letting it dry naturally, plus I’m not using hairspray much anymore which helps. But I basically just listen to what my hairdresser tells me. Tell Gabby not to worry so much about the hair though, it doesn’t matter, there are more important things!

LTW: Doug, thank you so much for spending some time with us, best of luck for tonight’s show, we’ll see you out there down the front!

DA: A pleasure, see you out there!