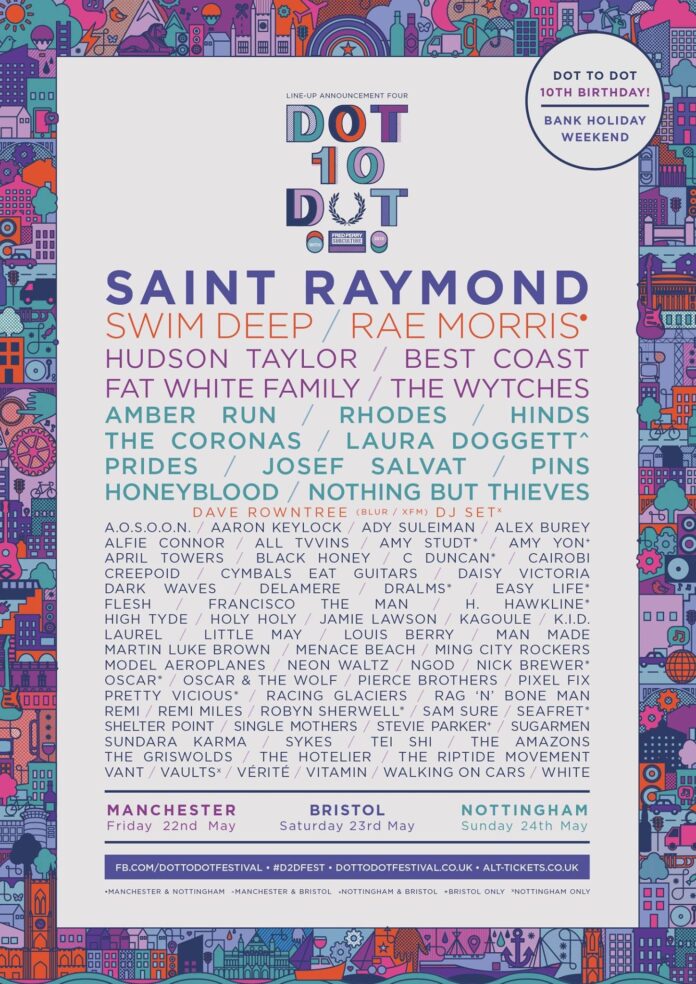 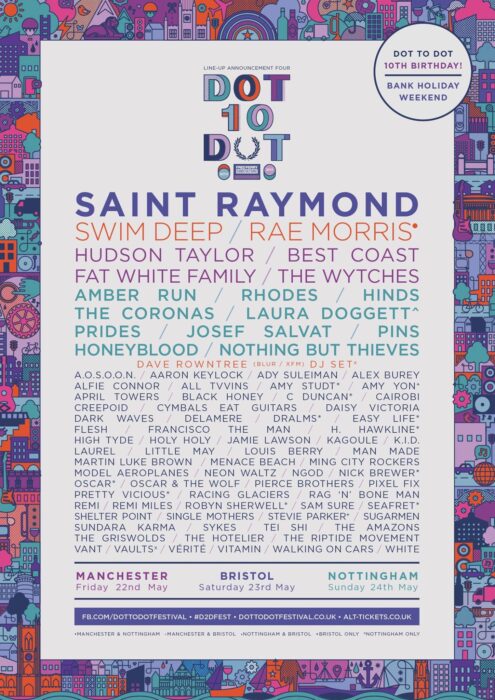 One of the UK’s best urban music festivals celebrates a significant milestone this year. It’s hard to believe, but Dot To Dot is ten years old! That’s a whole decade of musical exploration and bank holiday daytime drunkenness.

In preparation for this year’s event, Stephen Murphy has a poke through the Dot To Dot 2015 line up, to see who’s worth your time and effort this coming May bank holiday weekend.

Starting from humble beginnings as a Nottingham based one day mini festival (with Ladytron and The Rakes amongst those playing back in 2005), Dot To Dot now covers three cities(Nottingham, Manchester and Bristol) – utilising gig spaces of every shape and size imaginable. In Nottingham alone, there are eight venues, hosting over eighty bands in the space of fourteen (or so) hours. Beer will be drank. Ears will be punished. Dancing like a fool will undoubtedly occur.

One of the very best things about Dot To Dot, is that whilst it attracts a reasonable calibre of musicians you’ve actually heard of, it also presents an opportunity to hear music from locally grown talent. In Nottingham, Manchester and Bristol, you’ll almost certainly see a home town act who’ll make you swear that you’ve just witnessed the future of music.

With so many great musical artists on the bill, it’s difficult to know where to start. Here then to guide you, is Louder Than War’s pick of Dot To Dot 2015.

If there’s one ‘must see’ band of Dot to Dot 2015, it’s Fat White Family. How this whippet thin/five-a-day averse/thousand yard stare bunch of reprobates even manage to get out of bed in a morning – let alone create life changing music – is beyond me, but they do. Miss them at your peril.

Swoony, hook laden pop, with a hint of floor staring psychedelia. Listening to Swim Deep is like being whisked back to 1989/1990, but without the flares, beanie hats and unadulterated ecstasy.

Honeyblood are a Scottish duo specialising in bitter sweet indie tunes. Last year’s eponymous debut LP was one of the albums of the year. Delicate, yet somehow tough as nails/old boots/week old boiled beef.

April Towers are masters of shimming electro-pop. Nostalgia inducing and futuristic sounding, this duo are part of a Nottingham electronic music scene producing material as exciting as anything that came out of Sheffield in its 80s synth heyday.

If you’re going to Dot to Dot and you don’t make the effort to go along and see Kagoule, then you’re clearly stark raving mad. Absolutely-fucking-positively your new favourite band in-waiting. If you disagree, your ears don’t work properly.

It’s a real shame that the good people of Bristol and Manchester won’t get to see IVORYSERFS on this particular occasion. With sky scraping tunes, assembled with the intricacy of a fucking topnotch Swiss wristwatch, world domination is surely imminent for this Notts four piece.

Raucous, LOUD and intense, Bus Stop Madonnas are a two pronged primal force of nature that sound like the first warning sign of the oncoming apocalypse. Ear defenders advised.

Over the last few years, PINS have developed a reputation as a ferociously good live act, and their 2013 debut album Girls Like Us only cemented the notion that at some point they’re going to be absolutely fucking massive.

She Makes War (Bristol only)

She Makes War is the singular creation of Bristol’s Laura Kidd. Sounding like a fantastic Polly Harvey/Jeff Buckley hybrid – belting out tales of doomed life and love – I only wish she was playing all three dates of this year’s Dot to Dot.

Prog rock. Gloriously overblown, grand as a fucking gold plated palace prog rock. But wait! There’s slivers of punk in there as well?!! Punk-prog? Prog-punk? I think I need a little lie down… Oh Manchester, you lucky, lucky bastards.

Obviously, this is only the tip of the Dot To Dot iceberg. Much, much more awaits you on the 22nd May (Manchester) 23rd May (Bristol) and 24th May (Nottingham).

For more info, the official website for Dot To Dot 2015 is here.

Tickets for Dot To Dot 2015 can be purchased from Alt Tickets.