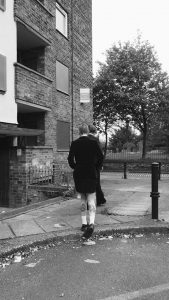 Some exciting concepts for the year, then – self-released vinyl in the true spirit of DIY, Suicide-esque slabs of synth-heavy sonic assault, and a debut solo release from someone I’ve often described as one of the finest songwriters of the mid-00’s. All of those are actually one release – the split single “Elvis” by Dorian and “Priscilla” by Sylvia.

“Elvis” is the solo debut of former Long Blondes lynchpin Dorian Cox, whose songwriting I admire so much I wrote a reappraisal of their album 2006 “Someone to Drive You Home” for Louder Than War back in 2015. Rather than stay in some kind of cul-de-sac, Dorian has started completely afresh and created something exciting and different, jerking into action with a sharp synth sound rolled into clattering drum machine. The aforementioned Suicide influence is instantly obvious, which then morphs into something more – the sound of Suicide getting into bed with The Fall (1979 era, to be precise, for those who want some clear visuals) and rolling around to produce an impressively precocious child. Dorian’s half-sung, half-spoken vocals are muted slightly, hidden behind a buzzsaw wall of sound, but his Northern accent is still apparent, a contrast with the American references of the lyrics that work in its tangle of cultural contradiction. Sharp, postmodern and sonically interesting, Dorian’s first venture under his own name does not disappoint at all.

The other side of the record, the accompanying and complementary “Priscilla”, is by Sylvia, a collaboration between Dorian and his real-life partner, the poet Elise Hadgraft. Hadgraft is a born star, being both achingly cool and hugely talented. The wordcraft she has made her trade has found a perfect platform in the minimal sound of “Priscilla,” a mixture of Dorian’s synth work and Hadgraft’s own “obnoxious” bassline, to quote Sylvia themselves (the story goes, wonderfully, that she picked up a bass out of the blue to create said bassline, before “making Dorian put some synth on it.”) Whereas Dorian’s vocals on “Elvis” are embedded within the sonic loops, Hadgraft’s on “Priscilla” are the polar opposite – crystal clear and heavily enunciated, her voice perfect fit for the minimal sound (on which, yet again, the ghost of Alan Vega lurks). The lyrics are as excellent as you would expect from a poet, tackling the theme of an out of date pop star, stewing in has-beens nostalgia. “You are not it…anymore,” taunts Hadgraft through a held note, part sniping torment, part wistfulness in its reflection of faded glamour and glory.

Separately, these records would stand out for me, but together they feel like a real event. The concept of the split release is used to its most powerful effect with such complementary songs, and the self-released and limited numbers of the vinyl itself keep it, as I said at the beginning, very much in that DIY spirit – a spirit that reflects in the minimal post-punk sound. Unafraid to wear its influences on its sleeve, but still something very original, this split single is an exciting release which well and truly grabs the listeners attention.

All words by Amy Britton. Find more at https://louderthanwar.com/author/amy-britton or via twitter at @amyjaybritton