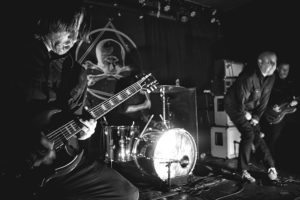 Doomsday Student- A self help tragedy

Louder than War get a right ear battering from Doomsday Student.

Doomsday Student is Eric Paul, Stephen Mattos, Craig Kureck, and Paul Vieira. Made up of members from bands such as Arab on Radar, The Chinese Stars, Athletic Automaton and Chrome Jackson, we should not be particularly surprised by the level of dissonance, noise and peculiarity melded into every layer of the music offered here. From unsettling lyrics to hysteric guitars and irregular rhythms, Doomsday Student are obnoxious to those who seek the obvious. The band has played with the mighty Retox, Guerilla Toss, Child Bite, White Mice, Head Wound City and Graf Orlok among many others. ‘A Self-Help Tragedy’ was recorded at Radar Studios by Daryl Rabidoux and mastered by Golden Mastering in April-August of 2016. Released by Three One G Records, Doomsday Student’s newest LP A Self-Help Tragedy, will be available on vinyl/digitally and through Skin Graft Records in CD format on December 2nd.

‘The First Trip’ starts this LP and jesus christ what a cacophonic start! Phoned in vocals reminiscent of ‘Pere Ubu’s David Thomas are combined with brutal pounding noise and seering metallic guitars.

‘LSD Mom’s lyrics are barely audible over the crushing noise. Yet bizarrely, it has a melody to it that makes you hum along to the noise. This punishing noise continues into ‘Angry Christmas’ with a story about a difficult birth and pretty much ends up in sounding like an aural version of a terrible train crash. Just brutal.

‘Wonderful’ and ‘Fight and Flight’ have equal amounts of vitriol and spitefulness that both have a combatative feel and a fucking horrible aural assault on the senses. Love it.

‘Yoko Ono’s Nightmare’ has echos of New York early 80s No Wave esque stabbing guitar spasms that again have the distant yet ever present vocals over the top. It’s reminiscent of Lydia Lunch’s work with ‘8 Eyed Spy’ with its jagged guitar and staccato vocals.