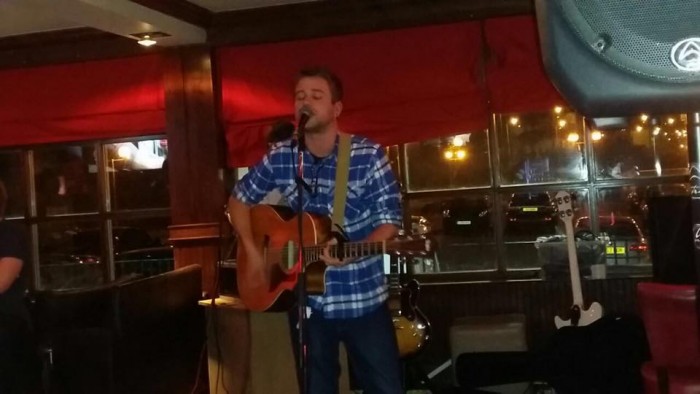 For part one of Don’t Panic: The Adventures of Dog Coffee – slaying the mini-tour, in which Ian Critchley writes about being a musician who suffers from severe anxiety issues, go here.

Things weren’t getting easier. Each day I was more worn to the bone with exhaustion and anxiety. Each day felt like twelve fucking thousand days due to the weight of trepidation. With every push in the past I could spend the following few days recovering and building myself up for the next challenge. I wasn’t given that grace with these shows and it was wearing on me. Hard. The anticipation was the killer. Waking up mornings already burnt out with hours until I played was rough on my mental state. It was getting too much. It felt like the harder I was pushing the more I was feeling like I wanted to revert to my former self. To stop moving forward, to simply go home and draw the curtains. To lock the doors and say good fucking bye to a life of any worth. But anticipation is a trickster, a cocky little prick  who creates doubt for no good reason but his own amusement. The feeling of dread was only that, a feeling. There was no physical Grim Reaper creeping up on me and if I could just keep that fact at the forefront of my amygdala I could make it through.

I thought about all the time I’d felt this defeated, and how great it had felt the times I’d continued to push and succeed… I kept pushing.

I’d learnt that the best thing to do when anxious is to refuse to shy away. No matter how little you wanted to, you had to force yourself to get outside your own head anyway you can. A couple of years back I’d watched a show called something like ‘Four To Dinner’. It starred Henry Rollins and, among others, the actor from The Shield who played The Thing in the Fantastic Four films (Michael Chiklis – imdb referencing Ed). He was talking about how panic attacks would kick his arse every time he put that suit on. Someone told him when the panic started to come on that he had to force himself to talk to everyone to get out of his own head, regardless of how much he wanted to just lock himself away in his trailer. This was one of the best lessons I’ve ever learnt. Pushing yourself to have even a small conversation during the throes of panic could help loads. With this in mind I headed up early to spend the afternoon at my best friend’s flat, down the road from the venue, and used the great company of my closest companions to elevate my mood and clear the fog  from my mind.

The show was strange. I’d been put as the headliner even though the other acts were far more likely to draw a crowd. I was worried that everyone would leave before I’d even taken to the stage and, as much as a bigger crowd could fuel the fires, it would be a little disappointing to play to an empty room.

I owed a lot to Our Fold’s Gaz Drury and even more to the second act, Jade Assembly. When I first started using my own music to not only deal but overcome my anxieties, they were the people that initially helped me with local shows and support. They were all incredible musicians and equally as incredible friends.

After the two acts had played the crowd dwindled slightly, I didn’t mind too much by this point. This felt less of a show about all the things I was moving towards and more about appreciating the thing I had already done and the friends, some in bands and some not, that had got me to where I am today. 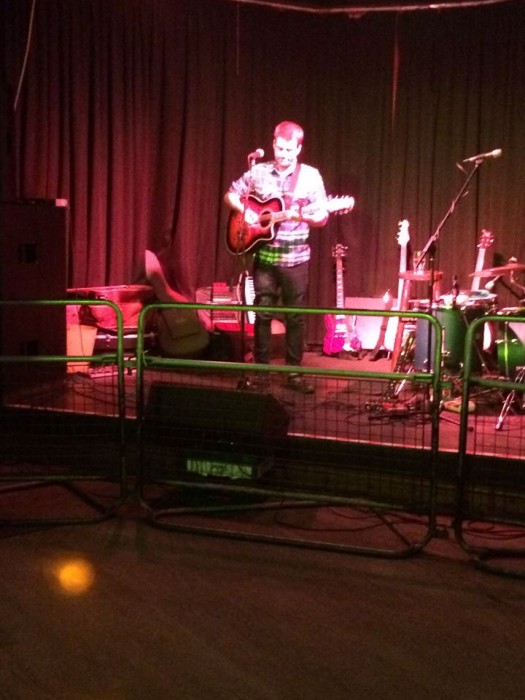 I woke up. Ready. I was anxious, sure, maybe more anxious than any of the other dates. But I was ready. Tonight would be the final show of the mini-tour and, from the messages on the Dog Coffee page, there would be a crowd there specifically for me. The perfect way to end the biggest struggle of my life so far. And even though it had been a struggle it had also been an amazing experience.

I took the train and sat watching the hills roll by. My phone began to buzz with messages from a friend who was currently working in Africa helping monkeys. She suffered much of the same stuff as me, and had been having a difficult time pushing so hard, but now her messages were filled with glee instead of trepidation. To read it boosted me massively, my own turmoil slowly being replaced with a happy excitement. Knowing that someone I cared about was not only also facing her demons but succeeding, just as much as I was, shot my negativity so far a field it felt as if I never had the doubts to begin with.

I walked around as I had hours until I had to be at the venue. I looked at the art gallery, the cathedral, and winter gardens. Sheffield is a beautiful place.

I swapped set times with another act, Andrew Pearson, who had a train to catch earlier than mine. This turned out to be a blessing in disguise as the room had filled out quite a bit more as the night went on. Usually the anxiety eased the closer it got to my set, my mind constantly confirming that I was going to get up there, but tonight the nearer it got the more I was struck by nerves.

Every act before, and the one after too, had great musicianship in their own respect. Lucy Routledge’s intricate piano work, the lyrical prowess of Andrew Pearson, the golden voice of David Walker, and the mind blowing versatility of Esperi’s and his loop based folk sound. All I had was a fire in my belly, this desire to amend my broken mental state. Was it really enough? A group of people who had seen me play the Frank Turner pre-show in Manchester at the start of the year had turned up just to see me, so I must be doing something right.

I took to the stage and proceeded to pour every iota of my being through my fingers into my guitar, and from my belly to my throat and out of my mouth. Even if not one single person had given a shit about my songs on this adventure I could still take a great sense of achievement from having actually done it, but that hadn’t been the case. I’d made new friends, and cemented old ones, with each hand shook resulting in a, at least seemingly, genuine compliment about the songs I had written and the attitude I brought to the stage. My final song was ‘Heading South’, the lyrics about a time I travelled to London, pushed the constant feeling of anticipation and fear, and ended up having a great day.

“I feel myself fitting somewhat

“More comfortable into my own skin.”

Playing my songs had not only give me the the drive and outlet to “slay my demons”, but was making me the happiest I’d ever been.

“From the boy who was afraid to leave the house

“To the man you see today.”

To think that not too long ago just getting out of my front door was a huge accomplishment, and to compare that to the strength I have now, is something I really cannot put into words.

“If pride in what I’ve done,

“Makes me a sinner,

And I was proud. So much so that it became impossible to pull my smile down from ear to ear the entire journey home.

The musicians mentioned in this article can be found by clicking their respective links: