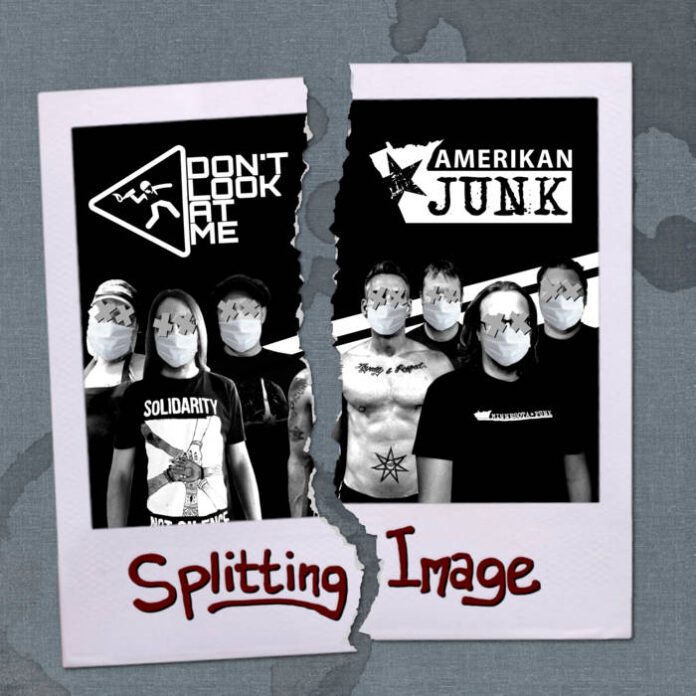 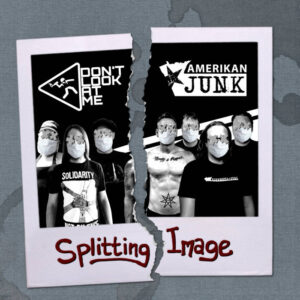 Nathan Brown listens to a split album featuring 2 Minnesotan punk bands, both offering up a different take on melodic hardcore.

I first became aware of Don’t Look At Me as part of the Punk Ethics drive to get more bands to commit to using sweatshop free shirts for their merch. DLAM are on Vol 1 of the (highly recommended) benefit comp Give Sweatshops The Boot.

Unsurprisingly Don’t Look At Me wear their conscience on their sleeves so their half of the album largely has a theme of inclusivity and human rights.   They kick off with a riff that reminded me of a Rudimentary Peni song and then I couldn’t get that out of my head. That reference doesn’t fairly represent their sound although in one or two places some of the bass lines and drum patterns have that RP vibe. In fact it would be downright misleading.

DLAM play mid-paced melodic hardcore with fast slow tempo changes, a touch of metal and drums that slap would be a fairer description. There are a couple of moments where I am reminded of Propagandhi. The vocals are less melodic: slightly growly, half intoned half shouted but not really sung. Not quite Leftover Crack but in that vein. The deadpan delivery is akin to the later, slower, stuff by Rudimentary Peni and some of Dee Dee Ramone’s solo work. While the song Music Is For Everyone features a beatdown with a rap thankfully it ain’t in Dee Dee King territory.

Amerikan Junk have apparently been around since ’98 and are way more melodic than DLAM. There is a heavy dose of Seven Seconds. If DLAM draw on later Propagandhi, Amerikan Junk share something with the first 2 Propagandhi albums.

They have chuggy guitars with the occasional twang or arpeggio flourish. It’s the tuneful vocals that really trigger the 7 Seconds comparison although at times they get more rocky in an Offspring sort of way. At times you’ll hear a little Circle Jerks, Dag Nasty or Descendents. You know the drill. I Don’t Wanna Wake Up sees the band fully embrace a more poppy sound that could sit in the Weezer back catalogue.

Bouncy positive hardcore seems the right way to sum up Amerikan Junk in a phrase.

Splitting image is the latest release from Concrete Head Entertainment. It’s a Minnesota based independent label and recording studio that has been releasing music since 2001. They appear to be a collective: “a small group of friends and like minded artists that work together and have fun.”

To have a listen or download Splitting Image hit up Concrete Head Entertainment on bandcamp.

You can catch up with both bands via Facebook: