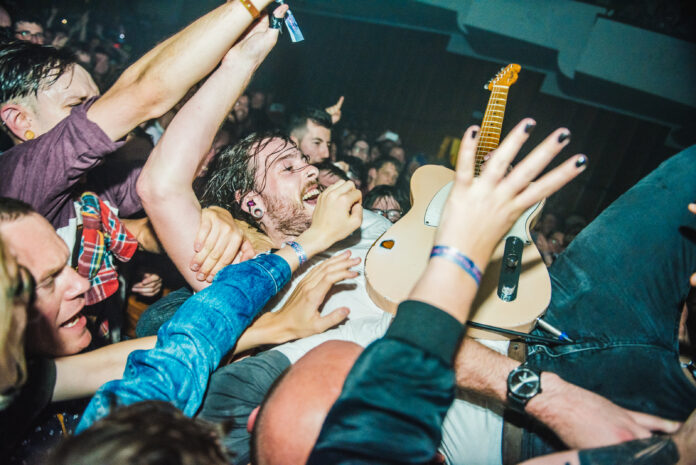 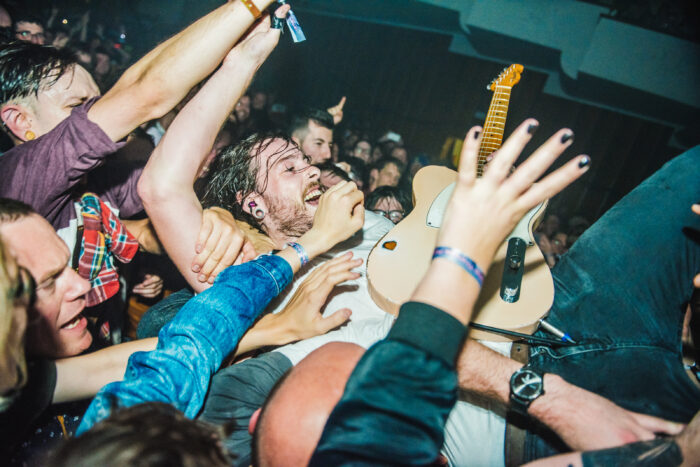 Often a documentary lifts the lid on the unseen and unknown side of a band.  Don’t Go Gentle: A Film About IDLES is about to get its cinema release. Filmed between Joy As An Act Of Resistance and Ultra Mono, it offers a rounded sense of what being in the band means to the five guys making the noise and to those who live the noise with them. How much more can you reveal, then, when a band like IDLES have made themselves so open, so knowable already?

It’s partially a ‘fly-on-the wall’ documentary in that it pieces together video footage from past and present. We follow them on tour: snoring in vans, waiting in airports, backstage juggling oranges, manning the merch stand. They’re very much aware of the camera’s presence, yet there’s no posturing, making the portrayal suitably ‘warts and all’.

The biggest way its filming fits the notion of a ‘fly on the wall’ is in how people can often get pissed off with a fly on the wall, buzzing around like a lairy blue bastard. The whole thing begins with Joe Talbot sitting on the stage at The Louisiana, smiling and telling director, Mark Archer, “I’ll ignore you, Mark. I’ve had enough of your shit.” Bassist Dev (Adam Devonshire to the Inland Revenue) is like John Rambo with his middle finger trigger happy in the direction of the camera throughout. If digits could kill, he’d be the bearded assassin.

Their annoyance is, as it can be on record, playful. All part of the fun. Watching Don’t Go Gentle captures precisely how, when and why IDLES give a shit about things that matter, but also how frequently and endearingly they give not a solitary shit about rockstar guff, like looking cool. It has that feeling of watching The Young Ones in the early 80s, the difference being that all five band members are different shades of Vyvyan. There’s a serious commitment to the cause coupled with unfiltered messing about reminiscent of the team in Ghostbusters.

We not only see direct interview footage from the band members individually, but we also see the impact they’ve made on others. IDLES’ unrivalled fan community, The AF Gang, is shown to be another fundamental limb of the beast. Founders Brian Mimpress and Lindsay Melbourne talk of just what a profoundly positive influence the band, and what has subsequently grown around the band, have had in their lives.

The late superfan Matt Day, much missed within the extended IDLES family, plays a prominent role. Resplendent in glittering gold jacket or equally glorious pink suit, he calls supporting the band a “life-changer.” We see the third co-founder, Louise Hughes rush over and hug Matt outside SWX in Bristol. Such is the love that the Gang spreads and the safe space it provides for people to unleash their emotions.

Big Jeff Johns is not only seen rocking out to the band more than once, but he helps to fill in the band’s back story – an aspect that provides another of the documentary’s insights. Original guitarist, Andy Stewart helps provide context to the unlikely path of the band’s slow-burn success, often slogging through barren, gigless times with relentless self-belief and navigating times of personal crises with friendship and forgiveness. Contributions from Steve Lamacq, Felix White of The Maccabees/Yala Records and Mez Green from Life offer a further perspective from within the music world.

As a mantra, ‘Don’t Go Gentle’ (DGG to The AF Gang) comes from that Dylan Thomas idea of raging against the dying of the light. In simple terms, it espouses living with true vitality, whilst identifying and honouring your own truth. As a documentary, Don’t Go Gentle is as likely to make you laugh as it will make you cry. You might even want to smash up some chintzy china. It should also make you want to live your best life.

Don’t Go Gentle: A Film About IDLES will be screened widely in cinemas across the UK and Ireland from 2nd July 2021, with previews and filmmaker Q&A’s running in selected cinemas and venues from 23 – 30 June. See full listings below. Tickets are on sale here (Note: new screening dates and cities are still being added).
Don’t Go Gentle will also be released for VOD streaming for UK and EU customers on 6 August 2021. Pre-order it here.