Home Blogs Don’t Blame Me, I Voted For Kodos – Dan Lucas Reflects On... 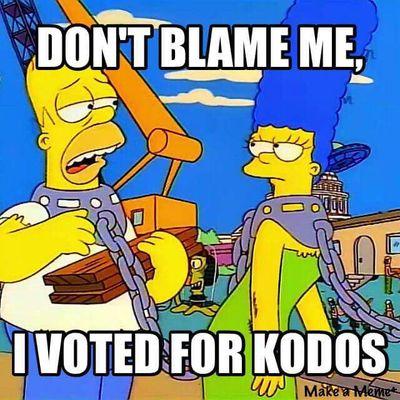 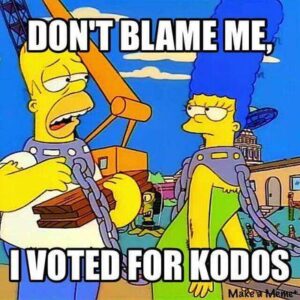 A warning, in the words of Sean Lock: “There’s no need to swear” people tell us. Well this is exactly the kind of situation swearing was fucking invented for.

The idea of another five years of Tory rule makes me feel a lot of things, none of them good: helpless, bleak and angry. Five years for the rich to get richer. For my rent to go up more than my wages. For foodbank queues to stretch further than the eye can see. For a massive increase in the number of people I guiltily tell I don’t have any spare change / fags. For Richard Branson – and I have nothing specific against the guy, but the notion stinks – to head up the NHS. For trains to become a more elite way to travel than a fucking limousine. For Scotland to think “fuck this shit”, and why wouldn’t they after the anti-SNP Tory rhetoric of the election campaign? For the rest of the UK to leave Europe and put on the biggest, most lavish stage performance of Children of Men across an entire fucking country.

“Cunts are still running the world,” sang Jarvis Cocker back in 2006; who knows about the rest of the world? Britain is going to become a cloud cuckoo land bubble under this set of cunts.

So here I am, in left-leaning London, blogging impotently on a punk website that has a strong focus on left-leaning Manchester. I’ve taken to Twitter and to Facebook this morning and all through election night, swearing, drinking and making – if I do say so myself – some pretty good, acerbic comments (and Simpsons references). It was kind of nice actually, I felt a greater sense of community on there, where all my friends were doing the same, than I do in Real World London. Just like in the 1980s everyone hated the Tories and it was only a shitty legal loophole that allowed them to cling to power by winning all those elections.

Who then, is voting for them? Well, I know people who did. I’m related to people who did. This might make me biased, but they’re not evil reptilian former Bullingdon Club members as far as I know. They’re decent, loving human beings who genuinely seem to want what’s best for people. They’re people who, personally, have prospered under Tory rule in the past and they want to be able to care for the ones they love. If I’m completely honest, I personally have benefited from Conservative rule, although this is little consolation when I see what it’s done to others closest to me. The people I know who voted for them always have and probably always will as long as they’re comfortable and their friends and family are too. I can’t criticise someone for voting to protect the ones they love.

On the other hand, one Conservative voter I spoke to told me that he was worried that Ukip might succeed in his constituency. He’s not someone who was considering Ukip and was drawn to the Tory’s more right-wing policies, but someone who saw them as a danger and felt that only the Conservatives were realistically going to keep them out. Again, I don’t have a problem with that in principle, but what the hell were the British left doing in those places?

“Rupert Murdoch isn’t as powerful as he used to be” Ed Miliband told us before the election. Well his most popular media outlet, The Sun, backed the SNP in Scotland and the Conservatives in the rest of the UK. Things seem to have worked out pretty nicely for him. “We have Russell Brand on board now!” cheered Labour supporters. It turns out there are a shitload of people who don’t care what Russell Brand thinks (and not just on the right).

We can blog and tweet and update our statuses all we like, but ultimately it’s a load of backslapping and congratulating ourselves on being really clever and witty. The apparent social media surge towards Labour was akin to watching Barcelona playing a six-a-side game between themselves. All the time that we were rubbing our hands in glee at the prospect of turfing Cameron et al out, the other side were reeling in voters from Ukip.

At the same time, the only realistic opposing candidate was looking paper-thin and losing votes to the minorities: in many constituencies, votes that would once have helped Labour to victory were lost to the Greens, to Tusc and elsewhere. Whether disenfranchised or bloody-minded, voters for those parties let the right come in through the back door. For such a landslide result, the popular vote was close with many constituencies seeing only a narrow Conservative victory.

We, the left, need to campaign for change outside of our virtual online worlds. We need to find a way to appeal to those swayed by Murdoch and the traditional media. We need to fight for electoral reform and societal change more vocally, by engaging with politics directly rather than through celebrity endorsements, snark and Kent Brockman memes. I’m as bad as anyone for that, because it’s fun, because we get a sense of togetherness in doing and as such it provides a blanket of comfort. But it might be a good idea for us to actually fucking do something too.