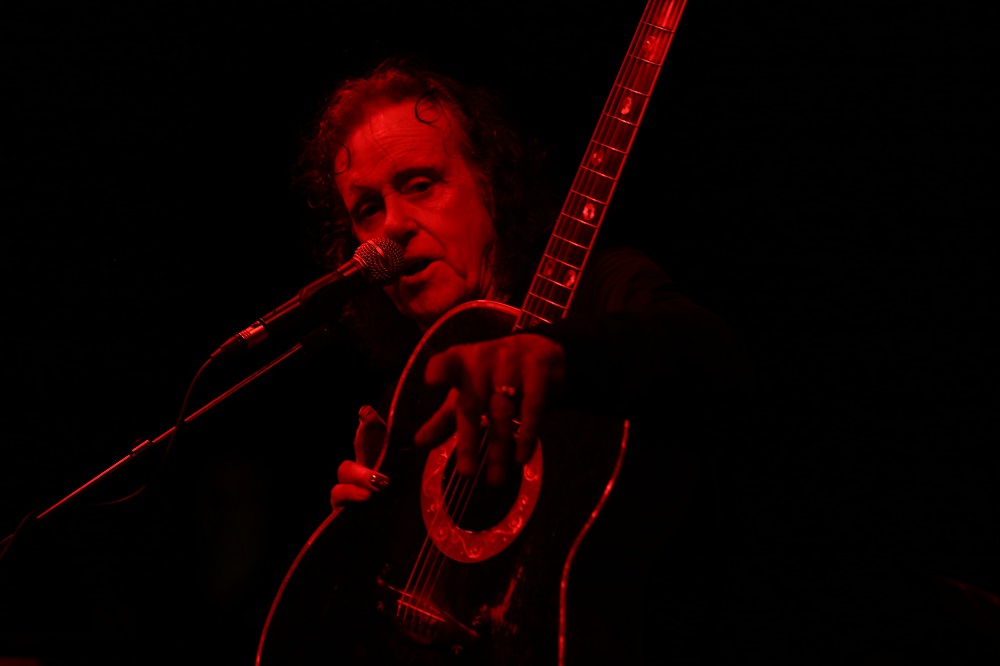 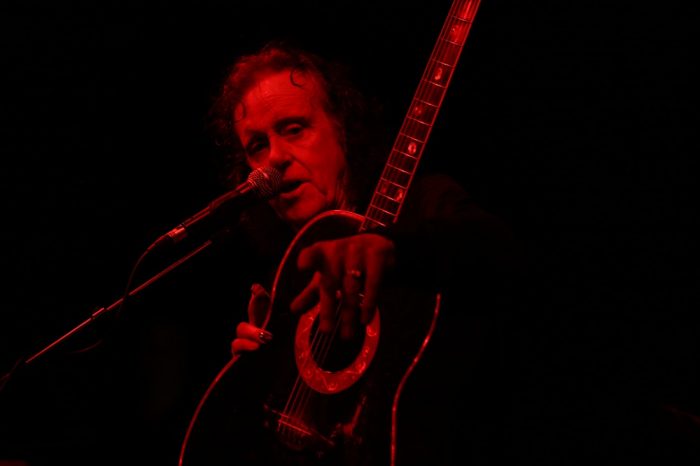 Donovan plays a rare band gig  as the folk legend knocks out the hits backed by a crack team of Manchester musicians.

Donovan has always slightly laboured under the cloud of being hailed as Britain’s answer to Dylan, and that lazy comparison to genuine greatness undervalues a Rock and Roll Hall of Fame alumni who is not only one of our greatest songwriters, but one of our most successful too.

This rare gig with a band was booked by the late, great Alan Wise to tune them up for some festival dates, so not surprisingly features some of Manchester’s best musicians including the incomparable Durutti Column drummer Bruce Mitchell, James Young on keyboards who was last at The Trades thirty years ago in Nico’s band and the ever cool former Stone Roses guitarist Aziz Ibrahim on acoustic bass.

But Donovan is at heart still a hippy so he felt obliged to kick off with a few acoustic numbers played on a battered guitar he has dubbed Kelly. It’s easy to forget just how big Donovan was in the 1960s and not many artists can kick off a massive hit like 1964’s Catch The Wind.

Donovan has been on the road for 51 years which showed as he charmed the audience with his dry wit and a sincere version of anti-war anthem Universal Solider before inviting the band up to let rip. Superlungs (My Supergirl) really benefitted from the beefed up sound.

The band only had a couple of days to rehearse, so at times it was a little rough round the edges, but Donovan seemed inspired by it.

He even got away with the cod reggae of This Is The Mountain as the band manfully gave it some rhythm and they nailed album track Celeste, which Donavan says is his favourite of all his tunes.

Donovan is a Glasgow boy so there is steel at the heart of his flower power, and Earthquake Blues was incendiary, aided by a guest appearance on guitar from Brian Jones’ grandson Joolz Leitch who clearly has the blues gene.

Then it was on to a run of big hits with a magical Sunshine Superman, a jaunty Jennifer Juniper and a still sinister Season of the Witch as the band all took solos with Aziz even managing a passable bass solo. A surprisingly youngish crowd felt moved to singalong to the evergreen smash hit Mellow Yellow as Donovan’s face lit up with sheer joy in this most intimate of venues.

Donovan and the band will be playing more festivals this summer so it is worth giving the dull hipster indie bands a miss and head over to see a great songwriter in action while you still can.

You’ll at least be guaranteed to recognise most of the tunes penned by a master who knows exactly how to work a crowd.

Donovan and his band plays Kendal Calling on Saturday July 30.